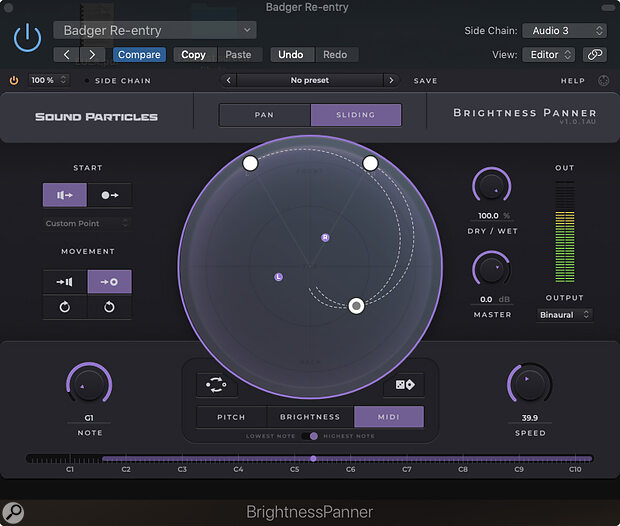 The Sliding mode, in which panning pauses at its current position when there’s no trigger signal.

This stereo/surround frequency‑based panner is dripping with creative potential.

Sound Particles’ Brightness Panner has much in common with their Energy Panner, which Hugh Robjohns reviewed in the August 2021 issue of Sound On Sound, so to avoid excessive duplication, I’d suggest that you read that in conjunction with this review. The panning engines seem pretty much identical, so the difference between the two plug‑ins is really in the way the panning is controlled. While Energy Panner responds to the amplitude of the incoming signal (which can be mono, stereo, immersive or surround) to trigger panning, Brightness Panner can be triggered by note pitch (with user‑adjustable high and low note ranges), by tonal brightness via a variable filter, or via MIDI. The plug‑in supports VST 2 & 3, AU, AUv3 and AAX native on recent Apple and Windows operating systems; Logic users will need to instantiate the MIDI‑controlled version of the plug‑in via an Instrument track in the usual way if MIDI control is required.

The panning modes include stereo X‑Y and M‑S as well as binaural, with a choice of discrete surround formats up to 7.1. The resizable user interface is very similar to that of Energy Panner other than the three triggering modes. There’s still the large, circular display representing a three‑dimensional dome‑like space within which the input signals are panned. The start and end points of each panning motion are shown as points with a dotted line indicating the panning path, and with speaker positions shown around the circumference. As with Energy Panner, there are two main panning modes: Pan and Sliding. In Pan mode, when the input signal falls outside the trigger range, the pan direction reverses so the sound moves back towards its starting point. In Sliding mode, for which the GUI colour changes, the panning stops when the trigger disappears but then continues from where it left off when a new trigger is detected. 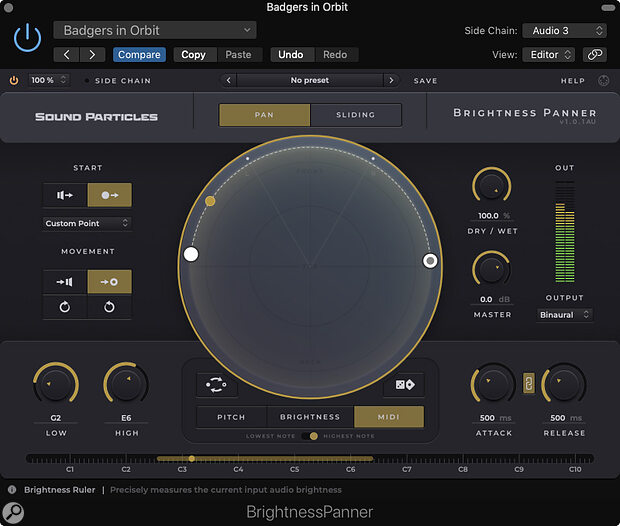 The Pan mode: when the input signal is beyond the trigger range, the sound moves back towards its starting point.

There are four movement settings: to Speakers or to End Point, with a choice of clockwise or anti‑clockwise motion. Depending on how you set it up, the stereo image can widen when triggered, the left and right channels can swap places or the virtual sound source can move around inside the dome, either in a circular path or in more mysterious ways that depend on the movement setting and where you place the start and end points. I’m never entirely sure how some of the movements are calculated, as some motions seem to do their own thing to an extent, with just passing nods towards your start and end point settings. But the result is always interesting and there are controls to adjust the rate of movement. A side‑chain input, for example, enables panning of one sound source according to the characteristics of another track, and there’s a wet/dry balance control to allow the panning effect to be diluted.

If you put a swept filter before Brightness Panner, pad sounds can take on a new sense of movement...

I’m already using Energy Panner quite a lot when working on my more ambient mixes, usually in binaural mode for scattering ear candy around the soundstage. But as with Energy Panner, while Brightness Panner does sound more dramatic when used in surround sound and immersive mixing formats, it works perfectly well with good old‑fashioned stereo. You can set it up to keep low frequencies relatively narrow, while giving the higher pitches more leeway to wander. And if you put a swept filter before Brightness Panner, pad sounds can take on a new sense of movement, as the motion follows its timbre. MIDI control can be used to create rhythmically tight pan patterns too. Then there’s the option to have the pan position follow pitch, so that a musical scale plays from left to the right or vice versa. I’ve found that setting a very fast pan speed can sometimes give slightly lumpy results, but at more moderate rates the result is smooth.

Given their relatively low cost and ease of use, there’s a lot to commend both Energy Panner and Brightness Panner, even if, with so much in common, part of me wonders why they didn’t combine both options in a single plug‑in.

Supporting both stereo and surround panning, the Brightness Panner can inject interest and movement into a range of mono, stereo or surround sources.

Buy It Now from SOS MusicTools