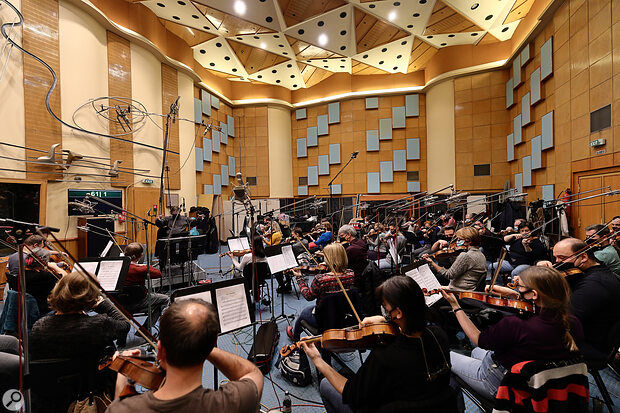 All 60 players of the Budapest Art Orchestra’s string section.

Soniccouture’s new library steps into a strange new world of sci‑fi and horror.

The modern media composer can no longer get by with a palette of standard sampled orchestral articulations. Aleatoric effects, sound design and non‑traditional playing techniques now play a major part in TV and film soundtracks, and sample libraries have evolved to keep pace. Consequently, most orchestral collections now include unconventional musical effects and processed sounds as a matter of course. Having been in the vanguard of innovative sampled instruments since 2005, UK company Soniccouture are well placed to get in on the act, and their new strings library looks set to become a significant player in the field. 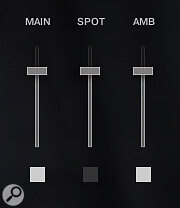 All articulations are presented as single full‑strings presets with instruments mapped according to range over six octaves from C1 to E7. The sections are overlapped and nicely blended so there’s no tonal discontinuity between registers. You can access additional high and low notes stretching far beyond the instruments’ real‑life limits, or stick within the safety zone by selecting ‘authentic range’ in the ‘options’ edit tab.

Before veering off into uncharted realms of madness and horror, Threnody provides a few conventional articulations suitable for general music production. The looped ‘simple sustain’ long notes are a chance to hear the Budapest musicians playing it straight: utilising a restrained vibrato, they create a strong, bright and positive section sound which leans more towards tough and heroic than romantically lush — unsurprising given the astringent tonal territory this library aspires to.

An interesting long‑note variant, ‘diagonal bowing’ has the players randomly moving their bows up and down between normal and sul tasto positions. Played with a slightly stronger attack than the simple sustains, this style adds timbral motion, extra overtones and a slight roughness to the sound. Conventional tremolos make the intense, dramatic shuddering we know and love, while the ‘chaotic tremolo’ artic features the players randomly changing their tremolo speeds, producing a superbly rich and vibrant ensemble timbre.

The close‑to‑the‑bridge ‘molto sul ponticello’ bowing creates a fabulous thin, icy texture in the violins’ upper register. At the opposite end of the pitch spectrum, playing chords in the basses’ bottom octave with the ‘ponticello tremolo’ preset sets off a cataclysmic earthquake‑like rumble, a scary foretaste of the disquieting material that lies ahead.

Threnody begins to show its true colours with the ‘micropolyphony’ artic. This replicates a compositional device developed by Ligeti, in which similar melodic lines played at different tempi overlap to create (in the composer’s words) “a kind of impenetrable texture, something like a very densely woven cobweb.” In Threnody the overlapping lines are atonal, unsynchronised and improvised from a fixed note selection within a small pitch range, producing a massed, concentrated flurry strongly reminiscent of the sound of buzzing insects. This unsettling style is thus a shoo‑in for the soundtrack of any horror film with ‘Swarm’, ‘Attack of’ or ‘Killer Bugs’ in its title.

The sense of unease continues with the ‘unstable pitch’ preset, a nasty, queasy, menacing musical effect in which the musicians use an over‑wide slow vibrato and play out of tune with each other. With its ‘behind the bridge’ performances, Threnody steps into a pit of horror: the basic arpeggiated style sounds like a screechy, industrial‑strength version of the spooky waterphone effects heard in sound libraries 10 years ago, while the tremolo variant veers off into utter madness, a deranged, hellish cacophony calculated to cause consternation amongst listeners. Do not use these presets on a romantic ballad.

The library includes a suite of Kontakt effects.

‘Harmonic glissandi’ provide a welcome break from the insanity. Nothing new here — this effect (created by running a finger lightly up and down the bowed string) appeared in Stravinsky’s The Firebird in 1910, but its eerie, disembodied slithering still sounds fresh and works splendidly for drones. The ‘seagulls’ version is a single, determined‑sounding glissando slide down through the harmonic series of the string — ideal for scenes of alien winged creatures swooping from the night sky. Originally played on the open strings of the instruments, these artics are transposed to all pitches. 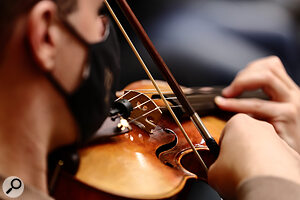 Threnody also contains conventionally bowed glissandi unlike any I’ve heard before: rather than the fast risers and downers found in other libraries, these glisses travel slowly and steadily through the entire range of the string orchestra, with instruments imperceptibly joining in or dropping out as the massed unison glissando passes through their pitch range like a non‑stopping slow...