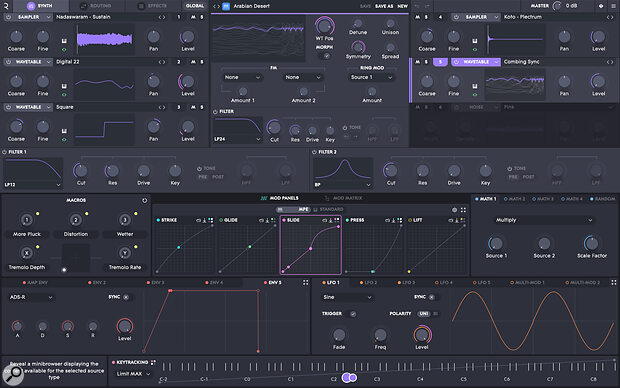 ROLI’s Equator2 is less an update than a full rebuild.

Equator2 is a refresh of the original Equator software instrument from ROLI. That first version actually ran natively inside the ROLI Seaboard Grand as well as being available as a soft synth. Equator2 is an update which extends and generalises Equator1, and improves its interface.

Installation is via the ROLI Connect app, the fiddliness of which I think I grumbled about a bit in my review of ROLI’s LUMI keyboard, and installing Equator2 itself is not enough: 5GB of sample library needs to be fetched separately, otherwise most of the presets of this sample‑oriented synth will be silent. You probably want to wheel in the original Equator1 material too — there are some useful single‑cycle waveforms in there, for a start.

Visually, Equator2 has a bit of the Bang & Olufsen about it: grey controls sit against a grey background with very subtle shadows, and a bit of colour is used for sparse (but important) highlighting. Equator2’s window layout is very much a game of two halves: oscillators (or, as Equator2 calls them, ‘sources’), routing and effects share the top half, selectable by tabs, whilst the lower half is completely dedicated to modulation.

Nothing special jumps out from the synth’s rather austere appearance, but it is subtle, deep and layered. For a start, a voice (by which I mean what’s heard when a single key is pressed) comprises six parallel sources, each of which can be configured as a PPG‑style wavetable player, a sample player, a granular source or a noise generator. FM and ring modulation are provided for the synth purists. There are two multimode filters per voice, but each source also has a dedicated filter, making eight in all. Modulation is very well catered for, with five envelopes, five LFOs, two multistep modulation sources and some ‘maths’ functions for side‑band modulation, randomisation and the like. Conventional and MPE gestures can be programmed as modulation, and there’s a macro control panel for broad‑stroke control.

The top half of the Equator2 controls, showing sources and filters.

A central oscilloscope display is flanked by the six panels for the sources, three on each side. Click on a source panel, and the central area switches to a detail view of more controls for that source. Single‑cycle waveform displays are animated — useful to see ‘symmetry’ distortion and wavetable sweeps — but there’s little visual indication for sample or granular playback, or filter shape. In general, Equator2 is pretty miserly with visual feedback, which is a bit of a drawback.

For a source, Wavetable mode really means single‑cycle waveforms of some kind. There are some waves (pulse, sawtooth, sine, square, triangle) which are procedurally generated for maximum accuracy — important for techniques like FM — and a couple of hundred sampled‑based sweepable PPG‑style tables, plus a handful of single‑cycle samples. These can all be shaped by the ‘symmetry’ control, akin to PWM. Waveforms can be stacked and detuned within a single source, leading to the sort of chorusing effects beloved by PPG fans.

An expanded view of one wavetable source, with filter.

Any sources in this mode can participate in FM synthesis: a source can have its frequency modulated by two others. If you want to arrange sources into an FM stack you can mute those intended as modulators, or just not mix them to the outputs. The various FM INIT presets display a clean, crisp FM tonality, even when running with just two or three sine‑wave sources. Other sources could add to the FM or layer it with samples, taking things into classic Yamaha SY territory, especially with some tastefully programmed FM dynamics. For even more harmonic fun, sources can be ring modulated too.

In Sampler mode a source plays samples, as the name suggests. The controls are minimal: apart from the standard pitch, pan and level controls there’s a start offset knob and a switchable 12dB boost, and that’s about it. Most of the named samples are actually multisample sets, but this is only really apparent if you dig around in the file system to find them. Some samples are one‑shot, some are looped: there’s no indication which is which and no display of loop or crossfade points. It probably goes without saying that there’s no actual sampling functionality in the sampler, but you can drag and drop multisample sets on to the sample chooser to add your own into a personal library. Even this modest task might be a challenge depending on your DAW, if it insists on hiding plug‑in windows when backgrounded. (In the end I launched Equator2 as a standalone application when I wanted to add samples that I could use in my DAW.) None of the preset sample sets is fantastically big (the baby grand piano is 340MB, rather small by today’s standards), but the material is varied and decent quality.

The rather sparse sampler source.

Some of the disappointment of the sampler is assuaged by the next source mode, Granular. Pretty much everything you’d expect from a granular synthesizer is here. You can set, and modulate, the starting sample position for the grains, the scan rate through the sample, size and creation rate of grains, grain shape, playback direction, pitch randomisation and stereo width. Rather unusually, grain creation can be quantised to the clock, allowing for rhythmic effects (there are some interesting drum rhythm presets which use this technique). Sample selection works in one of two modes: in ‘note’ mode the multisampling machinery is still in play, so that you get the appropriate sample for the pitch you’re playing. In ‘index’ mode this is switched off, and instead you get to choose which of the samples to use. This isn’t all that useful for the stock acoustic samples, since you’re taking them way out of their natural root pitch, but there are some rather good ‘granular’ sample sets where each sample is a distinct texture. Sweep the index and position with some LFOs and you get some truly dynamic and engaging textures: cleverly, Equator2 lets you dynamically modulate which sample you’re using for grains within a single held note.

The final source type is Noise, with the choice of white, pink or a sparser ‘crackle’. A density control can thin the noise effect out. Noise is not particularly exciting on its own, but for thickening up textures or building drum sounds it does the job.

The voice architecture provides two global multimode filters per voice — each including a tone control — and each source also has a dedicated filter, so that’s eight in total per voice. Unless you’re an avid reader of manuals, you might well not spot them all: the source filter is only shown in the detail view and is disabled by default, visually fading into the grey background.

Downstream from the six sound sources and the global filters there’s an effects section, but to engage this we have to go into routing mode first, via a tab top‑left, though in fact ‘mixing’ is a more accurate term for what is effectively an audio matrix.

The routing view, routing sources into filters and effects.

Each of the six sources, and the ring modulation output, has five level knobs for sending signal into the two global filters, two effects chains, and/or directly to the audio outputs. These five levels can be modulated to vary each source’s downstream processing over time, or automated for overall control. The filters can be arranged in parallel or series with various routing options, and their output can be routed into the effects and/or dry to the main output.

The routing matrix is not fantastically complicated but is subtle enough that I found myself wishing for some kind of VU metering to get a sense of what was going where or to explain what I was hearing. (Or why, sometimes, I wasn’t hearing anything at all.)