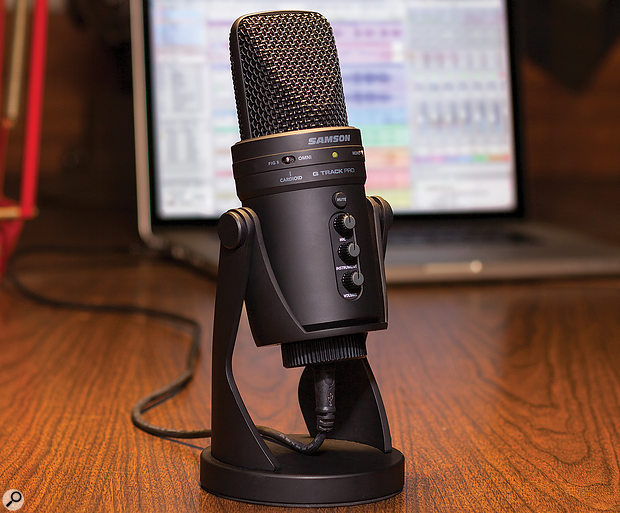 I already have a tiny Samson USB mic that I use to make recordings when away from home, but the G‑Track Pro is something altogether different. While it is still a USB microphone, the G‑Track Pro is a full-size, multi-pattern studio mic, with its own headphone amp and heavy desk stand built in — the total weight is a hefty 1.6kg. Furthermore, it includes what I’ve always thought should be fitted to more USB mics to make them truly useful — an instrument input, with a 1MΩ input impedance that will keep guitars happy. It can operate at 24-bit/96kHz, making it suitable for use by serious musicians, as well as podcasters.

The cast zinc base incorporates a friction swivel mechanism — so the mic stays put at whatever angle you set it — and a soft rubbery base keeps it from sliding around on the desk. Mic and stand measure 116mm in diameter and 268.5mm in height. All the parts are finished in satin black, with white legend.

Power to run the mic and associated electronics comes from USB so no phantom or other power source is required. The microphone capsule is a dual-diaphragm capacitor model built around a one-inch capsule skinned with three-micron metalised Mylar, and offers three switchable polar patterns: cardioid, omnidirectional and figure-of-eight. For instruments, the quarter-inch unbalanced jack on the rear of the mic accepts guitars, basses, keyboards and line-level sources. Both the mic and the instrument input can be used simultaneously so, for example, a singing guitar player can record separate voice and DI’d guitar tracks at the same time. However, if you need to mix the two signals to record onto a single mono track, you can do that too — there’s a Mono/2-track switch on the mic body for this.

Three small knobs at the front of the mic control the mic gain, instrument gain and monitor volume, and there’s a three-colour LED just above to indicate power, clip or mute. This lights green for power, flashes red when clipping and lights amber when muted. A switch on the back labelled Monitor routes the direct mic and line/instrument inputs to the headphone out, alongside the DAW mix, allowing for latency-free monitoring.

To put some numbers on the performance, the specified frequency response is 50Hz to 20kHz (but there’s no confirmation that these are the usual 3dB down points), with a sensitivity of +6dBFS/Pa for all three polar patterns. The maximum SPL handling is 120dB, but no noise figure is included. Offering driverless operation, the USB codec can run at 16- or 24-bit resolution at up to 96kHz sample rates. There’s plenty of headphone power on tap (85mW with 32Ω phones) and phones with impedances as low as 16Ω can be used.

While the noise level for USB-powered mics can sometimes suffer a little in contrast with their phantom-powered bretheren, I didn’t notice any noise issues working with typical close-miked vocals or instruments, so I don’t think the noise performance is anything to worry about unless recording very quiet or distant sources.

Vocals came across in a well-balanced way staying solid without being muddy and clear without sounding glassy or shrill. I couldn’t find a frequency-response curve for this mic, but I suspect its presence peak isn’t too ferocious in the crucial upper mid-range region, and it should suit a wide range of voices.

As for the instrument front-end, my electric guitar was recorded cleanly and without issues, though the recorded waveform suggested that the recorded signal might have been polarity inverted somewhere along the line, as transients always headed downwards rather than upwards.

For the solo recordist who only wants to record one or two parts at a time, and only one of those via a microphone, the G‑Track Pro provides a solid solution for a good price, and most active monitors should run well enough from the phones output as an alternative to doing everything on headphones. I’d recommend a pop shield for vocal recording, as I would with any mic, but other than that, the G‑Track Pro is a very solid, nicely self-contained recording solution.