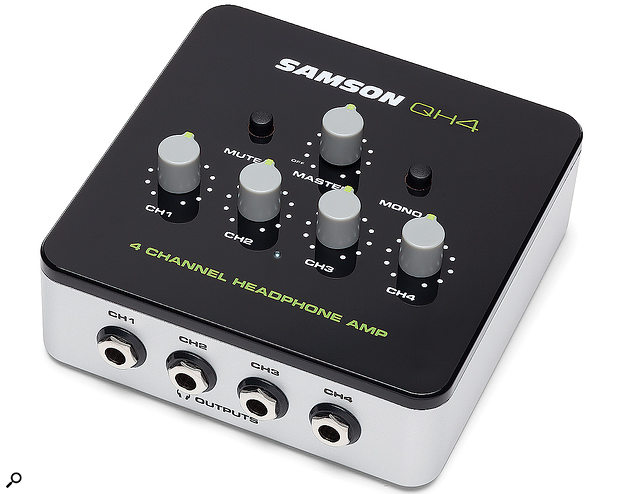 Unless you only ever record one person at a time from the comfort of a separate control room, you’re likely to need a headphone monitoring system that can drive two or more headphones, with each output having at the very least its own level control. In more complex setups, you might want to send each headphone a separate mix fed from a dedicated aux send, but in many home recording situations feeding each headphone from the same monitor mix is often enough.

The hardware needed to achieve this is far more cost effective to produce than a multi-input system, and this is what the Samson QH4 does — it’s a simple, four-output headphone amplifier. Each output has its own volume control, but there’s also a master volume control that incorporates a power switch, a mute button and a mono button. A discrete white LED shows that the QH4 is powered up and switched on.

Designed for desktop use, the Samson QH4 has a glossy plastic top panel and aluminium-clad sides. All the connections, other than the four headphone outputs, are on the rear panel. The headphone outs are on the front edge of the box where they are easy to access and power comes from the included power adaptor.

The QH4 has two balanced, quarter-inch jack inputs that would normally be fed from a pair of outputs on your audio interface, but there’s also a stereo 3.5mm mini-jack input that can be used to play music from a portable player such as a smartphone, tablet or iPod and the master volume control can be used to adjust its level. All four stereo headphone outputs are on quarter-inch, TRS jacks, but there’s also a stereo 3.5mm Aux Out jack that can be used to link two or more QH4s for when more than four sets of headphones are needed — that’s a simple but thoughtful and practical touch.

Headphone impedances vary considerably from model to model, so the Samson QH4 is designed to accommodate phones in the 16 to 600 Ω impedance range while still providing adequate power and headroom, so it caters for most models I can think of. My tests using a variety of headphones confirmed that; the available clean volume was always far in excess of what was comfortable (or healthy, come to that!). Importantly, there was no apparent background hiss and I have no complaints regarding the sound quality.

There are many companies making headphone amplification systems, covering a range of prices, but while some may offer a better on-paper technical specification or additional facilities, if you just need something affordable and practical that covers the basics while delivering clean audio, the Samson QH4 ticks all the right boxes.