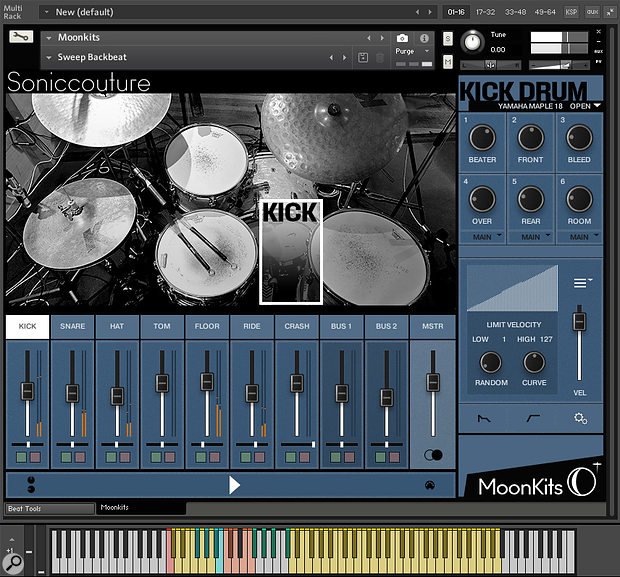 Back in the September 2017 issue of SOS, I was fortunate enough to review Soniccouture's excellent Electro-Acoustic drum library/instrument for Kontakt. Electro-Acoustic was a bit of a tour-de-force combination of detailed sampling from classic drum machines, innovative mixing options that allowed you to add room ambience to those sounds much as you might with an acoustic drum kit recording, and beat creation tools that were truly creative. Soniccouture have now added a further niche drum library/instrument to their catalogue — Moonkits — and while it uses acoustic drums as its source, and a Kontakt-based UI styled differently from Electro-Acoustic, the core engine, sound-shaping and beat creation tools are essentially the same. So, does Moonkits deserve to be as big a hit as Electro-Acoustic was?

Moonkits' unique selling point is that it is dominated by (mainly) brushed drum sounds. So, while other libraries may seem to focus on high-energy playing, here the emphasis is on capturing the details available in soft-to-medium playing dynamics. Five different acoustic kits have been sampled in considerable detail (the library is 12GB in total), played by two top-notch drummers (Adam Falkner and Evan Jenkins), all recorded in Ray Davies' north London Konk studio using the same Neve console that was used for recording Pink Floyd's The Wall. If you expect this to result in some pristine and detailed acoustic drum sounds, full of sonic character... well, you would be right. You can, of course, mix and match the drums across the five kits as required.

Moonkits is simply an absolute sonic joy. Can I give it 6 out of 5?

Those presets are organised into three groups: Jazzy Brushes, The Studio Moonkits and Urban & Contemporary. Every preset loads with an example groove to give you a flavour of what it's capable of.

The first two groups perhaps cover the sorts of sonic ground you might expect from a brush-based approach. They sound fabulous, with a truly inspiring level of detail and realism including, for each preset, a set of snare sweeps available to trigger alongside the more conventional hits. The third preset group is perhaps a less obvious choice but, if you work in funk, hip-hop or quirky pop, then there are some absolute gems here. It's also here that you experience the full potential that the multiple microphone options and effects can bring to the sounds; a kit played with a brush might not be the first thing you think of to shake your speakers, but Moonkits can do that if you want it to, while somehow still retaining its subtle feel. Oh, and the ability to define a MIDI velocity curve on a per-drum basis allows you to really pull out the subtlety provided by the 100+ velocity layers. Of course, this does also mean that, like its older sibling, some of the Moonkit presets do come with a hefty RAM requirement.

As described in more detail in the Electro-Acoustic review, the sound-shaping and beat creation tools Soniccouture provide here are excellent and super creative. Combined with the beautifully crafted core sample library, Moonkits is simply an absolute sonic joy.