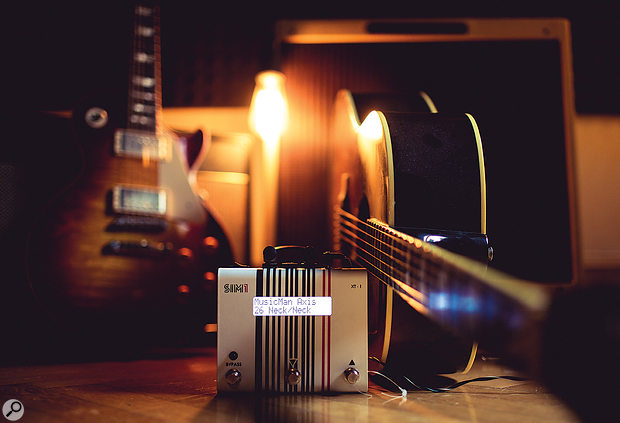 Ever wished you could play your Tele but hear your Les Paul? This clever box of tricks makes that possible...

Though it only fully came to market in 2019, the XT‑1 was voted 'Best Accessory' back in 2018 at the Winter NAMM show. Having put it through its paces since I bought one as an early Christmas present to myself, I can see why...

Using SIM1's proprietary patented technology, the XT‑1 allows guitarists to create and store profiles of electric guitars which can then be used as sources to be modified by the stored profiles of other guitars. For example, the single-coil pickup of a source guitar can be made to sound like the humbucking pickup of a target guitar, or vice versa.

Designed and hand-built in Italy, it's encased in an all-steel enclosure with an off-white surface and finished with a barcode of black and red stripes. The rear panel carries the unit's quarter–inch jack audio I/O sockets, which comprise a mono TS input, a balanced TRS output (for connection to acoustic guitar amplifiers, mixing consoles, audio interfaces etc) and a mono TS output jack for connections to effects pedals and electric guitar amps. On either side of this group of jacks sit the on/off switch and a non-locking, centre -negative connector for the supplied linear "super-noiseless" 9V, 1A power supply. On the right-hand side of the XT‑1 sits a USB 2 port that allows the connection of either of the two supplied accessories — a USB Wi-Fi adaptor, which can connect the pedal to a smartphone/tablet, or the SIM1–branded USB stick, used for backup and transfer of data to a desktop computer. Although this port can be connected to a MIDI‑USB adaptor to allow MIDI program change messages to be sent to the XT‑1 from an external controller or computer, it cannot be connected directly to a computer USB port — indeed, damage may result.

The top panel features a two-line (16 characters per line) monochrome LED display, which shows the XT‑1's operational status, and a red LED that illuminates when the unit is in its True Bypass mode. A row of three non-latching footswitches not only handles bypass and the selection and recall of the 99 possible on–board target guitar profiles, but also controls the source guitar profiling process, menu navigation and editing of the XT‑1's presets and on–board effects.

All amp, cab and mic matching/profiling products I know of have broadly similar profiling procedures. The XT‑1 is similar in that respect to the guitar software and hardware I already own — namely Bias FX2 and the Audio Sprockets Tone Dexter (reviewed in SOS September 2018: https://sosm.ag/audio-sprockets-tonedexter). However, with the XT‑1, the notes played during the profiling process and their duration are prescribed very precisely. This prescription arises because of the XT‑1's patented profiling process that, in simple terms, analyses a fixed chromatic sequence of notes across six strings in order to produce the sound profile of an individual guitar. This profile is then used by the XT‑1 as the source to be modified by the stored profile of a target guitar.

The I/O on the rear panel include both balanced and unbalanced outputs, to cater for both acoustic and electric guitar amps as well as PA mixers and audio interfaces.Although only one source guitar profile can be active at a time, you can create and store an almost unlimited number of source guitars, all of which remain in the XT‑1 and can be individually recalled using either the Windows/Mac XT‑1 Configuration Manager software or the Android/iOS app. One neat feature of the profiling process is that it's possible, using the software, to convert the source guitar profiles you've created into target profiles, thereby enabling you to play the sound of any guitar that you own (or can borrow) from any of your other guitars.

After you've plugged the XT‑1 into a guitar amp or audio interface, switching on the power leads to a slightly uncomfortable wait of 43 seconds as the XT‑1 comes to life. This is not a pedal whose power supply lead you want to accidentally kick out during a gig! Once it completes its boot sequence, the XT‑1 is ready for action, with Preset 01 loaded. As a new owner, unless you can't wait and are happy to use one of the four generic source guitar pickup combinations provided, your first action will be to create a profile for a source guitar using the XT‑1's Learn and Play procedure.

Learn and Play starts with pressing the Bypass and Preset Down buttons for five seconds. You then specify the number of pickups on your guitar, the choices being one or three (a two-pickup guitar's selector switch has three positions, which counts as three 'pickups' in this context). As soon as you confirm the number of pickups, the XT‑1 starts a five-second lead-in to the 80-second countdown over which you have to play the prescribed 36-note chromatic sequence: six two-second-long notes across all six strings of your (perfectly tuned at A=440) guitar, starting from the open E on the sixth (lowest) string — that's a total of 36 notes over 72 seconds. If you've chosen to profile a three-pickup guitar, the process begins automatically with the neck pickup. If you make a mistake, pressing and holding the down footswitch aborts the process, which you can then restart. Once you become more familiar with the XT‑1 you might want to profile just one pickup from a two- or three–pickup guitar, and the Add Source variant of the learning process allows you to do just that.

Although this learning process is quite simple, I found timing the two–second durations of the sequence by following the countdown to be a bit hit and miss. A metronome timing of 54 bpm (and a bit of practice at playing the required notes) gave me 36 two–second notes in exactly 80 seconds, but to allow a small margin for matching the start of the XT‑1 countdown I went with 58 bpm, which gave me consistent results.

Once you've played the notes for one pickup, the XT‑1 awards a percentage score that indicates the quality of your efforts (100 percent being the maximum attainable). If you're happy with your score (95 percent and above produced the best results for me), you can press the up footswitch to move on to the middle pickup and repeat the process. Once happy with the middle pickup score, you move on to the bridge pickup. Having confirmed your acceptance of the bridge–pickup result, the XT‑1 begins computing your guitar's profile.

Once computed, the profile of your source guitar is assigned to all 30 of the factory-created XT‑1 profiles (see box) that occupy the first 30 memory locations, together with any others that you've downloaded from the SIM1 store or XT‑1 community, and the pickup positions of target profiles are associated with those of your source.

My first profile creation was that of my Thinline Telecaster and, as you might expect, playing the XT‑1's 1964 Telecaster target profile sounded extremely accurate. When you recall an XT‑1 target, the top line of the screen indicates the model that you've selected. The lower line shows the particular pickup that you've chosen, followed by the pickup that you should use on your guitar. For example, a 'Neck/Neck' tells you that you're playing through the target's neck pickup and that you should be using your neck pickup for the most accurate result.

Playing through the other profiles was an interesting experience, as all turned out to be quite impressive, especially once I'd switched over from the Thinline to my JV Squier Stratocaster and my SSH Parker Fly Deluxe, which I thought was the best of the three as a source. That's possibly because it is an extremely even–sounding guitar. There was something slightly disconcerting (but very pleasing!) about hearing a close recreation of the sound of a Benedetto archtop coming from the futuristic carbon–fibre and basswood guitar that was actually under my fingers (and without any perceptible delay or artifacts!).

As mentioned above, if the factory target profiles don't satisfy your appetite, you can convert your source profiles into targets using the desktop Configuration Manager program. If you wish, you can also upload your new targets to the free download Community section of the SIM1 website, where you can also purchase additional target profiles using either the Configuration Manager or the mobile app.

It's possible... to convert the source guitar profiles you've created into target profiles, thereby enabling you to play the sound of any guitar... from any of your other guitars.

Replaying guitar profiles isn't all that the XT‑1 has to offer, though. With version 3 of the software the XT‑1 added amplifier models (JCM800, AC30 or a 1968 Twin Reverb), all with gain and level; an overdrive with drive and level; a reverb with level; a treble and bass tone control; cabinet IRs (including several from ChopTone alongside SIM1's own cabinet and acoustic guitar IRs); and master gains for the balanced and unbalanced outputs. Editing the effects on the pedal is a simple process, although at present it's not possible to edit the effects other than the Master Gains using the Configuration Manager or the app; I hope that situation will change sooner rather than later.

Over the six weeks or so that I've been exploring the XT‑1 I've been impressed by its results. Like the Kemper Profiler, which is the XT‑1's closest equivalent in the amplifier-emulation world, when you find a target guitar profile that produces what you want to hear in conjunction with a particular source-guitar pickup profile, the results can be stunning. I've also found much inspiration in combining dissimilar guitars — for example, using a humbucker bridge source to drive a single-coil neck target — and the (probably) otherwise unobtainable tonalities that result.

Although not exactly a low-cost impulse buy, considering the pleasure and inspiration that I've already had from it, the SIM1's XT‑1 has proven to be the best value collection of guitars that I will ever own.

If you want to stick a metaphorical toe into this technology's water, Mooer's Tone Capture mini pedal offers a low-cost point of entry. Alternatively, Keyztone's Exchanger offers a unique equalisation-based remodelling of the sound of your guitar into one of eight possible pickup tonalities. And the Kemper Profiler is an obvious alternative on the miked-amp side of things.

The XT‑1 allows you to impose the characteristics of one electric guitar onto another — and for the most part, it does a very good job of it! Add in the included amp and cab modelling and this little box covers a lot of ground.