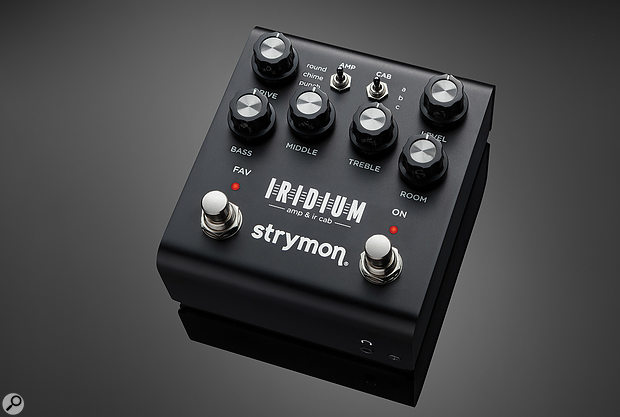 Strymon's analogue-modelling effects pedals have acquired an enviable reputation — can their first amp simulator live up to it?

California-based Strymon have quickly established a strong reputation for creating top-class effects pedals that emulate analogue gear, so when I heard they were about to release their first amp-modelling pedal I was really keen to try it out. The Iridium combines digital modelling of guitar amps with impulse-responses of cabinet/speaker/mic combinations and a JFET analogue input stage. The digital side of the equation runs on a SHARC ADSP‑21375 DSP chip and an ARM co-processor, while the analogue stage offers up to 20dB of gain and contributes to the natural-sounding way that this pedal overdrives when the input levels are pushed. The whole package comes in the form of a compact and user-friendly, two-footswitch pedal, which runs off an included 9V 500mA PSU.

Some manufacturers dazzle you with a choice of dozens of amp, cab and mic models, but Strymon have gone for a much tighter focus — as shipped, the Iridium offers a choice of just three amplifier types, designated Round, Chime and Punch, and each comes with a choice of three stereo impulse responses of cabinet/speaker/mic combinations. So there's a total of nine different amp/cabinet combinations. These cover lots of useful ground, but you can also load your own IRs, should you feel the need.

The controls are pretty much what you'd expect of a real guitar amp, with Drive, Volume and a three-band EQ section. There's no Presence control, but the EQ stack is tailored to suit each amplifier model. A three-position toggle switch selects the amp type and a similar switch selects the cabinet model. While there are no fancy effects here (the Iridium will, of course, work nicely enough with your other pedals) there is a Room emulation to add a little ambience. This is variable in level and combines synthetic reverb (based on Strymon's reverb-tank algorithm) with a 250ms room impulse response to recreate the sense of the amp being played in a real space. (Without some room ambience you always get that 'padded cell' dryness.) Holding down the On switch accesses a secondary-function mode (which will be familiar to users of other Strymon pedals), in which the Room knob switches between different room sizes.

On the rear panel, two quarter-inch jacks deliver the main stereo output, while a third can accommodate a mono input on a TS jack or a stereo input via TRS jack — the latter should appeal to anyone working in the studio and synth/keyboard players. A small switch selects the input as Mono, Stereo or Sum. A front-panel mini-jack headphone output caters for practice sessions or direct monitoring when recording. 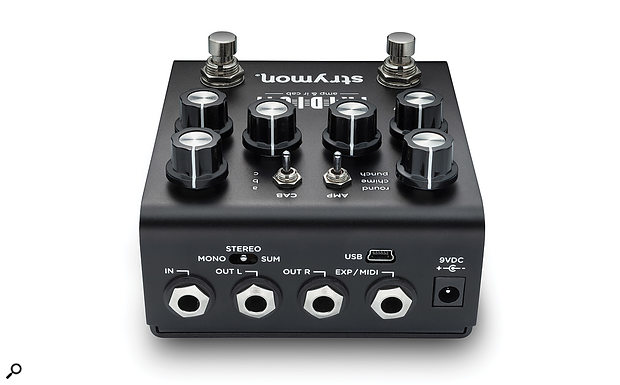 The right footswitch performs the familiar on/bypass selection, while pressing and holding the left FAV footswitch lets you store a favourite setting, which can then be accessed regardless of the current settings. There's also a MIDI/Exp jack socket on the rear for external control — an expression pedal can be used to control level, selected by default, or multiple parameters at the same time if you choose to set it up that way. MIDI, which requires an adaptor cable, may also be used to select presets or to control any knob or switch. You can also connect one of Strymon's own optional switcher units. Their MultiSwitch Plus makes it possible to access four user presets, while up to 300 presets can be accessed via MIDI — which is at least 290 more than I can imagine ever needing!

Strymon call their approach to amp emulation 'Matrix Modelling' and say that it comprises detailed emulation of the amps in question (as you'd expect) but with an extended parameter set that allows their models to have more tonal/drive range than the real thing. Along with amp compression and harmonic distortion, even the effect of power-supply sag on each of the separate valve stages has been reproduced, and it all helps to nail the feel as well as the sound of a real amplifier. 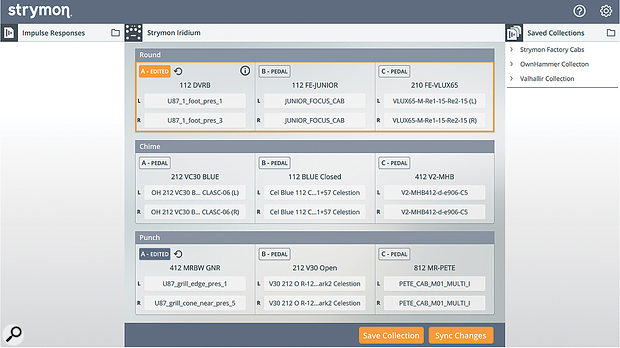 A free impulse manager app allows you to load either third-party or your own 24-bit, 96kHz impulse responses, via the rear-panel USB connection.

A high-quality cabinet model is really important to getting a modelled amplifier to sound and feel authentic. Impulse responses have been used since the early days of the Line 6 Pod, of course, but Strymon have taken a high-resolution approach here, using 500 millisecond, 24-bit, 96kHz IRs — and rather than reinvent the wheel by creating their own speaker IRs, Strymon have populated this pedal with quality ones from OwnHammer, Celestion, cabIR and Valhallir. A mini-USB port caters for loading your own impulse responses from a computer — it's a simple drag-and-drop procedure once you've downloaded the free Mac/Windows Impulse Manager software — but note that only 24-bit, 96kHz IRs can be loaded. The software also allows you to make the most of the stereo output by loading different IRs into the left and right channels; I tried this with some of the IRs in my collection and it worked flawlessly, providing some useful tonal alternatives.

The first thing you notice when using Iridium plugged into a studio monitoring system is just how touch-responsive it is, even on the highest drive setting...

If you need to hook the Iridium up to a power amp and speaker cabinet, or want to use a third-party cabinet emulator, you can bypass the speaker IRs by holding down the On footswitch while connecting power to the pedal. When both LEDs flash, release the footswitch and turn the Drive knob to determine what will be bypassed; the choices are: Amp and Cab IR on, cab IRs bypassed, and amp-modelling bypassed but with the speaker cabinet IR remaining active. During normal operation, the On LED denotes the colour of the selected mode when the pedal is active. Changes are saved when the pedal is powered down. 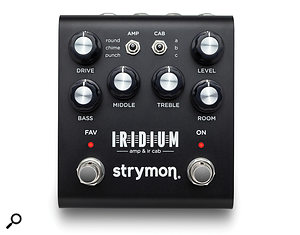 The three amps modelled by Strymon are Fender, Vox and Marshall models, and cover most tonal bases. The Round Amp is informed by a Fender Deluxe Reverb's 'normal' channel, and its EQ lets you go from a Deluxe character to something more Tweed-like. It's a fairly clean model that works very well with external drive pedals, and its IRs are taken from a vintage Fender Deluxe Reverb 1×12 open-back combo with a 1978 Fender CTS ceramic 12-inch speaker, a Blues Junior 1×12 with a Jensen C12N speaker, and a Fender Vibrolux 2×10 with Jensen C10NS speakers.

The Chime model is based on a Vox AC30 Top Boost amplifier but, having three bands of EQ rather than a single knob labelled Tone, it boasts more range than the original. (For this model, the Middle EQ control acts as a high cut as you turn it up — which might catch you out if you don't know about it!) The speaker IR choices in this case are: an AC30 2×12 combo with 2001 Celestion T0530 Blue AlNiCo speakers: a 1x12 closed-backed cab loaded with a Celestion Blue AlNiCo; and a Mesa 4×12 housing two Celestion Black Shadow MC-90 and two Electro-Voice Black Shadow EVM12-L speakers.

The first thing you notice when using the Iridium plugged into a studio monitoring system is just how touch-responsive it is, even on the highest drive setting of the Punch model. Play gently or back off the guitar volume and there's only a hint of distortion, but dig in and you're right into classic rock drive territory. The pedal is also very quiet (in terms of noise, rather than output level!), even at high drive levels, and that's impressive. The Vox-inspired channel captures the gritty jangle of the real thing well and it breaks up nicely when pushed, while the cleaner Fender-based model can still deliver a bluesy edge with the drive turned up if need be, even when paired with a guitar with single-coil pickups. Clean it up and it works well with drive pedals, just as a real tube amplifier would. 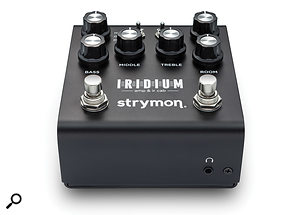 A front-panel minijack makes it easy to user the Iridium for headphone practice sessions, or to monitor the output while recording.There isn't quite the same sense of low-end thump you'd get from a 'real' amp, but in my experience a lot of that gets lost when recording anyway — in other words, what you hear from the Iridium is very close to what you'd hear in a studio's control room from an amp miked in the live room. As with just about any electric guitar part, the result can sound somewhat dry when heard in isolation without effects, and the Room function works best to my ears when used sparingly; it can sound a touch boxy if used to excess. A spring or plate reverb pedal or plug-in gets you that amp-with-reverb sound but it's really about using whatever effects you'd normally apply after miking an amp. My first thought was that, as Strymon already make some excellent reverb pedals, they might also have included a conventional spring reverb to complete the package. But perhaps they've already used up all the DSP capacity to deliver this quality of amplifier and cabinet sounds?

The limited number of controls means the Iridium is easy to operate, but there's nonetheless a surprising tonal variety on offer. And if you want yet more variety, then experimenting with some third-party cabinet models is the way to go — in fact, it can have a huge effect on the tone, changing the same amp from warm and punchy to bright and cutting. So the free IR Manager software is definitely worth exploring; there are some excellent free speaker cab IRs online if you want to look for them, or you can invest in some good commercial IR libraries (eg. those made by Celestion).

The bottom line is that I love the immediacy of this pedal, and the more I experimented, the more I came to realise just how flexible it is. The Strymon Iridium is definitely a viable, user-friendly and great-sounding alternative to the do-everything amp modellers out there.

The closest alternatives I can think of are the Neunaber Neuron and Tech 21's SansAmp — most of the other alternatives are full–blown multi-amp or multi-effects modellers, or include power amplifiers.

There's a lot to commend the Iridium's simplicity — dialling in a believable sound is much like setting up a regular amp.