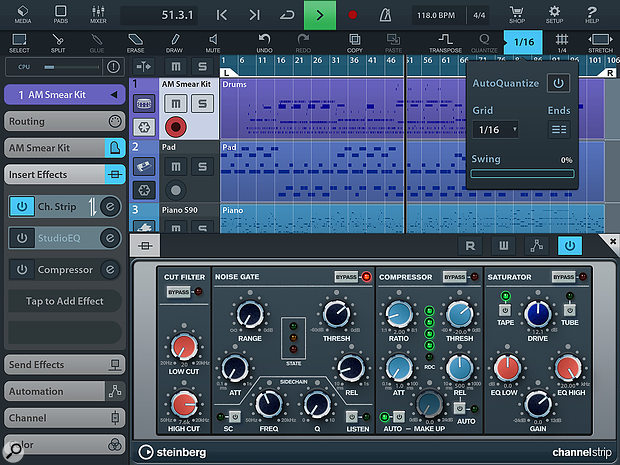 Cubasis 2 in all its glory. Here you can see the new Channel Strip insert, and note the new Auto Quantise setting in the Quantise pop-over.

When I reviewed the first version of Cubasis, back in the March 2013 issue, I concluded that it was “a very promising mobile music-making tool that could shine if Steinberg iron out the initial quirks and bugs and keep the app up to date”. And, in the nearly four years since the app was released, to their credit, Steinberg have done just that, with a steady stream of 1.x updates. These releases have included (take a deep breath) support for Audiobus and Inter-App Audio, the ability to have 24 inputs and outputs and utilise higher sampling rates, support for MIDI Clock and other MIDI messages, the Micrologue virtual analogue synth, track freezing, automation, audio output via Bluetooth, AirPlay, and HDMI, Bluetooth MIDI, MiniSampler and 64-bit support. So yes, Steinberg have done far more than simply keep the app ‘up to date’.

The first thing you’ll notice after downloading Cubasis 2 is what Steinberg describe as a “carefully redesigned user interface”. This essentially amounts to a flatter, cleaner design that’s a little crisper and more pleasing to the eye than previous versions.

One of the headline features is real-time time-stretching, thanks to the inclusion of Zplane’s Elastique 3. Say you add a drum loop from the Media Bay and want it to play back at the same tempo as your project; simply select the Event, tap the new Stretch button on the Tools panel, and a pop-over will appear, giving you the option to automatically or manually stretch the Event. If you select Auto, the Event will be stretched to fit the appropriate tempo (the supplied loops are embedded with tempo information); whereas if you select Manual, you can adjust the stretch factor by dragging two triangular handles that appear at the start and end of the Event.

An additional setting hidden behind an arrow lets you set the algorithm that’s used between Pro, Efficient and Mobile — Pro being the best, Mobile the worst, and Efficient somewhere in between. The algorithm you choose correlates to the CPU overhead, so users with older iPads may need to choose the lower-quality algorithms. With a drum loop, you could hear a difference between Pro and Mobile, although this was, of course, most noticeable when slowing a loop down rather than speeding it up.

Alongside the ability to time-stretch an Event, Elastique 3 is also used to provide pitch-shifting with formant correction. To pitch-shift an Event, simply select it and tap the Transpose button on the Tools panel. A Transport pop-over will appear, giving you three sliders to adjust the pitch in cents, semitones and octaves, plus two additional sliders to adjust Formant Shift and Formant Order. As with time-stretching, you have the same three algorithms available, although formant adjustments can only be made when using Pro. And it’s worth noting that if you apply time-stretching and pitch-shifting to the same Event, the same algorithm must be chosen for both.

Several new effects are provided in Cubasis 2, starting with the Channel Strip insert. Presumably borrowing from Cubase’s Channel Strip (certainly the knobs look the same), Cubasis’ strip offers a cut filter, a noise gate with side-chain, a compressor and a saturator offering both tape and tube modes. By default, Channel Strip is placed before StudioEQ in the signal flow, but you can tap a pair of arrows on the insert slot to reverse this order if you wish. There’s also a new insert called Spin FX that can produce stutters, tape stops, filter effects, and other DJ-like moves and is fully automatable. This is similar to the Remix FX controls Apple added in GarageBand 2.1, although while these are only available on the master output in GarageBand, Spin FX can be added as an insert to any track or output.

If you require additional effects, Cubasis has supported Audio Unit Extensions since v1.9.8, and in version 1.9 Steinberg began offering two additional FX Packs, which are more or less essential £4.99$6.99 in-app purchases if you find yourself really getting into the app. Pack 1 includes Tape Delay, Stereo Delay, Long Delay, Stereo Width, Non-Linear Reverb and Early Reflections, while Pack 2 offers Pan & Tremolo, Rotary Speaker, Bit Reduction, TalkBox, Wah Pedal and Enhancer. It’s just a shame Steinberg don’t now offer these as Audio Unit Extensions in version 2 so they could appeal to a wider range of users. And speaking of Audio Unit Extensions, it’s still not possible to automate these as you can with the internal effects.

Falling into the category of last-but-not-least, Steinberg have (finally) added an Auto Quantise option, along with additional presets for Micrologue and a number of ‘TAPE’ instruments for MicroSonic that add some Mellotron-inspired sounds to your palette. The only thing I wish Steinberg would have added is a Tempo Track, although such an omission is pretty common amongst iOS apps.

Cubasis 2 requires at least iOS 8.3 and is fully compatible with iOS 10 (I tested it on a 9.7-inch iPad Pro running iOS 10.0.1). Initially, when I saw the name of the app had changed to Cubasis 2, I assumed this would require a new purchase (as when Intua released Beatmaker 2 or WaveMachine Lab’s Auria became Auria Pro), but this is gratifyingly not the case. Cubasis 2 is an update like any other if you’ve already purchased the app. For new users, Cubasis 2 is priced at £39.99$49.99.

A second, LE version of Cubasis is also available with fewer features, and while it’s freely downloadable from the App Store, it will only run for 30 minutes in demo mode unless you connect a compatible Steinberg or Yamaha interface. LE can be upgraded to the full version for the slightly reduced price of £22.99$29.99.

In terms of functionality, Cubasis 2 sits somewhere between GarageBand and Auria Pro (which costs the same), although the latter’s more sophisticated features arguably come at the cost of a less-friendly user interface. If you’re a Cubase user, the ability to start a project in Cubasis and transfer it to Cubase via the Cubasis Project Importer is obviously rather convenient. And even if you’re not, you should at least check out the LE demo as, overall, Steinberg have really done — and indeed are doing — a fine job with Cubasis.