All-round percussionist and jazz vibraphonist Frank Ricotti has enjoyed a stellar career as a composer, arranger, band-leader and session player, appearing on countless records and film scores (Inception, Skyfall, Interstellar, the Bourne series, you name it). Clearly, this is the guy to call when you want some percussion samples recorded. Spitfire Audio’s Ricotti Mallets features our man playing straight hits, rolls and glisses on marimba, glockenspiel, crotales and xylophone. The first three instruments, formerly released as separate titles, have now been augmented by the xylophone and amalgamated into a single collection. But don’t worry, those who bought the earlier separate library versions are entitled to a discount. The library (16.5GB installed) requires the full version of Kontakt. 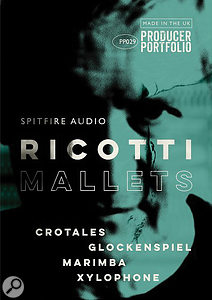 This marimba spans a full five octaves from C2 to C7 and was played at four dynamics. Recorded in fairly wide stereo, it covers the instrument’s classic tonal range from soft, full-bodied, sustaining and plummy to incisively woody and knocky. The ‘Main’ patch features Mr Ricotti selecting the most appropriate beater for the range and dynamic he’s playing in, and he should know. Alternatively, there are patches for different beater types (hard, soft, rubber and hot-rods), the latter adding an interesting quasi-ethnic flavour. Looped tremolo rolls (played at one dynamic only) and short, slithery bowed performances are also available. Minor criticisms: I experienced occasional tonal discontinuities when moving between dynamic layers, and the delightfully soft-toned rubber mallet samples only extend as far as E5. Neither is a cause for concern though: all in all, this is an excellent, great-sounding instrument.

Other instruments match the marimba’s musical options and presentation. The xylophone offers a generous choice of beater types, expanding its expressive range beyond the stereotypical hard, brittle sound you tend to hear in orchestral pieces. I loved the tone of the medium-soft beaters, appreciated the hard and soft roll options, and laughed and laughed at the glissando performances, the perfect accompaniment for cartoon comedy pratfalls.

A truly magical, two-octave set of crotales (small, tuned bronze mini-cymbals) are among the most beautiful percussion sounds I’ve heard, producing an exquisite, celestial high-pitched chime which will cut through arrangements like a laser beam. Addictively pretty. The pure, metallic tones of the glockenspiel are similarly enchanting, and feature the mouth-watering bonus of an ethereal, floating vibrato effect performed by waving a cupped hand up and down over the vibrating bars.

These delectable tuned percussion samples were recorded at London’s Air-Edel Studios from five perspectives, giving a choice of cardioid (my favourite), valve, condenser (wider stereo), ribbon (softer sound) and room mics which can be mixed to taste. Though fairly small and dry, the room miking adds a little ‘air’ to the sound, which is especially welcome on the marimba and xylophone. All instruments share the same GUI layout, which includes the entertaining Ostinatum rhythm sequencer.