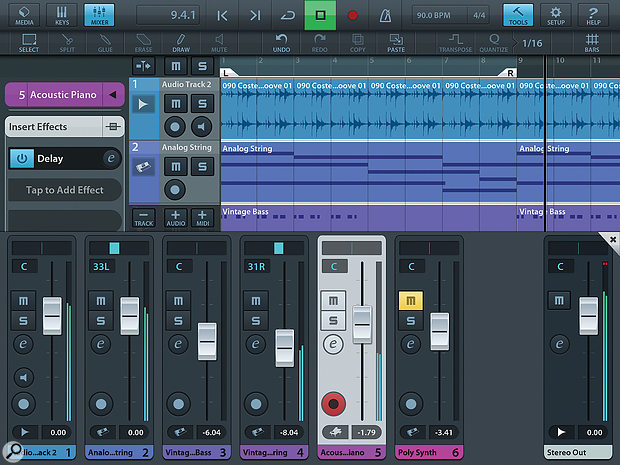 Cubasis in all its Cubase-inspired glory. Here you can see the Project View, along with the Tools panel (top) and the Mixer.

In the dim and distant past, Cubasis used to be one of the names Steinberg reserved for junior versions of Cubase, but now they've resurrected the Cubasis name for a new app that brings Cubase-inspired functionality to your iPad. This isn't the first time Steinberg have dabbled with mobile applications, of course. In addition to the Cubase iC controller app and LoopMash for iOS, Steinberg collaborated with Siemens, back in 2003, on Cubasis Mobile for the latter company's M55 mobile phone. However, where Cubasis Mobile was little more than a novelty ringtone generator, Cubasis for iPad is a surprisingly-capable audio and MIDI sequencer.

Much of Cubasis's look-and-feel has been borrowed from Cubase (including, surprisingly, the old, pre-Cubase 7 transport icons), but the interface has been designed very much with touch in mind. The main component of the interface is the Project View, shown above, which presents a Cubase-style arrange window, complete with the familiar Inspector. Complementing this View are a number of sub-views (for want of a better description) that slide in and out to provide access to a piano keyboard, drum pads, the mixer, various editors, and so on.

Projects can consist of either audio or MIDI tracks, and Steinberg claim you can create an unlimited number of tracks, depending on the capabilities of your iPad. Cubasis offers the ability to record on multiple tracks simultaneously, meaning that it's possible to use the app as a multitrack recorder with hardware such as RME's FireFace UCX. However, only 16-bit audio resolutions are currently supported, and you can only output a Project via a single stereo output.

To help you create your MIDI tracks, Steinberg supply a selection of over 70 virtual instruments based on Halion Sonic, and these can be selected from the MediaBay (where most aspects of Project management take place). A preview button is provided to audition each instrument, and you can double-tap to select it (or, if an audio track is selected, add a new track with that instrument). I would describe the quality of these instruments as no more than adequate, especially when compared with offerings from other apps.

In addition to triggering the built-in instruments, you can play other apps from Cubasis, as Steinberg have implemented full Core MIDI support. In the MIDI Connections Inspector Section, you can set a MIDI input and output port and channel, which will either be hardware sources and destinations (if you have any MIDI devices plugged into your iPad), a Core MIDI Network Session, or virtual alternatives. Cubasis itself creates a virtual port, and I found I had more success using this, and assigning other apps to use Cubasis as an input, than using another app's virtual port from within Cubasis.

MIDI support in Cubasis is currently slightly lacking in one or two areas: you can't send MIDI clock to other running apps, and there didn't seem to be an elegant way to disable the virtual instruments on a MIDI track if I was using Core MIDI instead. My workaround was to turn the volume down to infinity on a given track, but even then I couldn't be sure if Cubasis was still wasting unnecessary CPU cycles on these now-silent instruments. 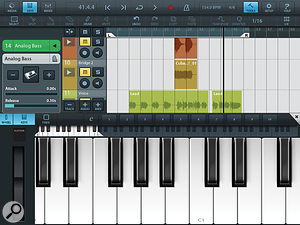 The Cubasis keyboard with the Analog Bass instrument selected.Editing functionality in Cubasis is provided via the Tools panel, which appears just below the main toolbar and includes the familiar Cubase tools, although these behave a little differently in Cubasis. For example, rather than selecting the Erase tool and tapping the Parts or Events you want to erase, you instead select the appropriate objects (using the select tool to rubber-band multiple objects) and then tap Erase to erase the selection. This works pretty well, although I missed GarageBand's use of multi-touch to select multiple objects.

When you tap to select a Part or Event in the Project View, a number of handles become visible, just as in Cubase, allowing you to resize the object, or apply fade-ins and fade-outs and make overall volume adjustments. Double-tapping a Part or Event opens it in either the Key or Sample Editor, depending on the type of the object. The Sample Editor is pretty simple: you can set selection points, and then perform a few basic processes on the selected material, such as reverse, normalise, and fade in and out. The Key Editor is a little more sophisticated, although it seemed very sensitive to my touch and it often felt as though my fingers were having an argument with Cubasis.

If you don't want to start from a blank canvas, Steinberg provide over 300 audio and MIDI loops to use in your Projects. However, it would be more precise to say drum loops, since there don't seem to be any other instruments covered; and, perhaps more disappointingly, the audio loops aren't able to follow the Project's tempo. This means you have to look at the tempo referenced in the loop's name and then set your Project's tempo accordingly, which makes you feel like you're back in the '90s again, and is a surprising oversight given that other iOS apps (cough, GarageBand) do have this ability.

Cubasis includes 11 effects that can up used as inserts (up to three per track, including the master output) or in one of three send slots. The selection covers all the bread-and-butter effect types you would expect — reverb, chorus, delay, compression, EQ, and even a guitar-amp simulator — and each effect has its own graphical editor, which appears modally in the centre of the interface when opened. A nice touch is the inclusion of a Preview button. If the Project isn't playing, you can press this to trigger a note or play some audio from the appropriate MIDI or audio track, so it's easy to make changes without having to keep opening and closing the editor.

One limitation of the effects is that the amount of control you have over them is often quite restricted. The EQ, in particular, is like an '80s car stereo, providing just two controls for treble and bass. Another slight weirdness is that the sends on a track seem to be 'sent' before any insert processing has taken place. So if you put a filter on a track as an insert and use one of the send slots on that same track to send to a reverb, the signal going to the reverb will be unfiltered.

Once you've finished a Project, you can perform a 'Mixdown' to render your work as either a WAV, MPEG4 or plain old MIDI file. The resulting file can then be shared via email, Dropbox, AudioCopy or SoundCloud, or opened via another application on your iPad that supports a given format. For example, it's perfectly possible to create a MIDI file that can then be opened in Notion to let you see the Project in musical notation.

It's also possible to share the .CBP Cubasis Project file (via email, Dropbox or iTunes), which can then be imported into Cubase after you download the appropriate extension from Steinberg's web site. This is great, since you can start with some ideas in Cubasis when you're on the go, and then load those ideas directly into Cubase once you get back to your main studio. The only slight down side is that imported Projects sound markedly different (especially if they're based mostly around MIDI tracks), and when the Project is imported, by default Cubase insists on opening the editor for every instrument and plug-in used by the Project. To prevent this happening, you need to disable 'Open Effect Editor After Loading it' in the VST-Plug-ins Preferences in Cubase when importing a Cubasis project.

Perhaps the most contentious aspect of Cubasis is its £34.99$49.99 price tag. While £35$50 isn't that expensive in the grand scheme of music technology — it's cheaper than most plug-ins — it is a princely sum in iOS terms. This places Cubasis at the high end of the fiscal spectrum for iOS music apps, alongside WaveMachine Labs' Auria (which is arguably more sophisticated for audio work, though lacking MIDI features), and most likely restricts Cubasis to a smaller group of buyers that will probably be a subset of existing Cubase users. This is a shame, since Cubasis is a very promising mobile music-making tool that could shine if Steinberg iron out the initial quirks and bugs and keeps the app up-to-date.