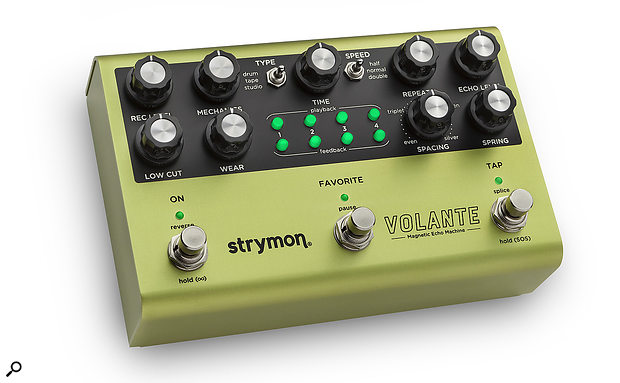 This isn't Strymon's first analogue-modelling delay pedal... but it may well be their best!

Strymon have built an enviable reputation in the 10 years since their first product hit the shelves, and one area in which they've been quite active is the digital emulation of analogue tape-based effects, first with the '3-head' El Capistan Tape Echo, and then with the '2-tape deck' Deco Tape Saturation and Double Tracker. With the El Capistan, they sought to emulate early single and multi-head tape echoes, whilst Deco tipped its hat towards the delay, flange and saturation/compression effects obtainable from early open-reel tape recorders. A more recent venture was the Eurorack-format Magneto, a '4-head' digital tape echo and looper, with a defiantly analogue front panel.

Strymon have recently added the splendidly named Volante Magnetic Echo Machine to this range. The Volante is a stereo‑in/stereo‑out digital evocation of drum echo, multi-head tape echo and reel-to-reel studio tape echo, with the added facilities of a sound-on-sound mode and an algorithmic vintage spring reverb. Its size, Italianate name (a musical instruction meaning 'in a light, flying manner'), greenish-gold paintwork and black background to the control area put me in mind of a Binson Echorec drum echo unit that once crossed my path and severely injured my wallet! Perhaps Strymon are tipping their corporate hat to Italian engineer Dr Bonfiglio Bini, who designed and built what is possibly one of the finest magnetic echo/delay effects units ever made?

The paintwork is where any resemblance ends, because the Volante's knobs and switches provide access to a range of DSP-driven, magnetic delay-based effects that Dr Bini could only have dreamed of. The vast majority of controls are organised in three functional groups in the upper half(ish) of the top panel, and the three footswitches (On/Reverse/Hold, Favorite/Pause, Tap/Splice/SOS) and their LEDs are arranged along the bottom edge.

On the left you'll find the four knobs: Rec(ord) Level sets the level going into the DSP, rather than the level coming into the Volante's input stage; Mechanics enables you to add an increasing level of mechanical aberration (wow, tape splices, crinkles etc.); Low Cut is a high-pass filter for the echo repeats; and Wear simulates the effect of wear on both media and heads by reducing the recording and replay of the high frequencies in the repeats.

The central block contains switches for Type selection (Drum, Tape, Studio) and virtual-tape Speed (half, normal and double). A rotary Time control sets the delay time by varying the distance between the Volante's virtual record head and its fourth virtual playback head. Since tape speed also has an effect on delay time, the available delay range at head 4 runs from a 400ms minimum at double speed to 4 seconds at half speed.

Underneath these sit two rows of four small, illuminated-when-active buttons, the top row of which allows you to hear none, any or all of the four playback heads. The bottom row allows you to set which head feeds its output back to the record head. This means that not only can you set up an echo/delay with any head combination, but you can also have a head sending its output back to the record head it without being present on the output — a facility first seen in the late-1960s, in the Echorec PE 603-T. However, you can do more with these buttons. First, you can use them (in conjunction with the Favorite footswitch) to store and instantly recall up to eight of your favourite settings. Second, you can use them in combination with other controls to access several other parameter and functional settings.

Three of the final four knobs set the character of the echo delay: Repeats governs the amount of feedback from feedback-enabled heads; Spacing morphs the virtual head spacing from Even, through Triplets to the Golden (1:1.61) and Silver (1:1.4) ratios; Echo Level sets the level of the delayed signal being sent to the output; and Spring controls the output mix of the independent, echo-optimised 'reverb tank', whose input signal comes from the dry signal input and the output of the Echo Level control.

The rear panel carries an Instrument/Line switch and four quarter-inch TS jacks, which provide connection to the Volante's stereo I/O (left jacks are for mono operation). A separate quarter-inch TRS jack input labelled Exp allows you to add an expression pedal, an external tap‑tempo switch, a quarter-inch TS to MIDI cable, or Strymon's own three-footswitch MultiSwitch Plus. A pair of MIDI in and out sockets enable you to recall up to 300 presets via PC messages, and to control all aspects of the Volante's operation using CC messages. A mini-USB socket allows you to connect directly to a computer via USB MIDI (a suitable cable is included) for control and for firmware updates. Finally, there's a non-locking 9V DC input for the included centre-negative 660mA wall-wart power supply.

The Volante caters for mono or stereo operation, and control via USB, MIDI, and/or external footswitches.As you might imagine, the Volante requires a fair bit of computational heft to do what it does. Sitting centre-stage is an Analog Devices SHARC ADSP-21375 that runs at 266MHz, and which has a peak performance of 1.596GFLOPs (one GFLOP is equal to a billion calculations per second). The Volante's ultra-low‑noise A-D and D-A converters run at 24-bit, 96kHz. Internal processing is 32-bit, and the Volante can deliver a flat frequency response of 20Hz-20kHz at a typical signal-to-noise ratio of 115dB. Other important aspects of the Volante's design are that the L-R inputs feed a pair of high-impedance (1MΩ) discrete Class‑A JFET preamps, and that other than the DSP effect output, the signal path is entirely analogue (and so has zero latency), with a relay-controlled true bypass — although you can choose to switch to a buffered bypass if you prefer.

You can, if you wish, just plug in and go — the basic controls are intuitive enough — but there's plenty more to be gained by reading the manual, watching all the Volante videos on the Strymon website and discovering the unit's less-obvious depths. For example, you can pan the heads between the stereo outputs by holding down the appropriate individual Feedback buttons and turning the Time knob. Or, if you'd like to create some accents within an echo pattern, you can do so by pressing and holding a head's Playback button to toggle between full (LED is green) and half (LED is amber) volume. Holding down Feedback buttons 1 and 4 and turning the Spring control knob adjusts the length of the spring reverb decay... And those few examples just scratch the surface.

Saving your settings in one of the eight on-board preset slots can be simple, too: press and hold the Favorite footswitch until its LED turns blue and then press one of the Playback/Feedback switches to store it in that location. But if you've got MIDI hooked up and configured, you have the added option of sending a Program Change message to store your settings in one of the other 292 MIDI-accessible presets. Recalling an on-board Favorite is simply a matter of holding down the Favorite footswitch and pressing the appropriate Playback/Feedback button, or sending a PC message via MIDI. If you've been editing a preset from any of the 300 possible locations and want to preserve your changes, pressing the Favorite footswitch will write your changes to that preset, and pressing Tap will discard them.

A Volante preset stores every button, switch and knob position, plus the expression jack input setup and the Live Edit settings (accessed by pressing and holding Feedback buttons 1 and 4). In addition to the spring reverb decay length mentioned earlier, these include MIDI Clock on/off, the Pause ramp speed, the sound‑on‑sound repeat and loop volume levels (we'll get to the footswitched functions soon), and whether or not the Volante will respond to MIDI CC 100 (Expression Pedal). With an expression pedal connected you can create two sets of knob positions within a preset (one in the heel position and the other on the toe), store the results and then move between them. (Whilst this is a great facility, personally I can't help but wish for the additional ability to morph between two presets!) And if you've invested in Strymon's MultiSwitch Plus, then you can have the options of directly recalling on‑board presets 2, 3 and 4; of switching between half, normal and double speeds; or of reversing, pausing or infinitely holding a recorded sound‑on‑sound loop.