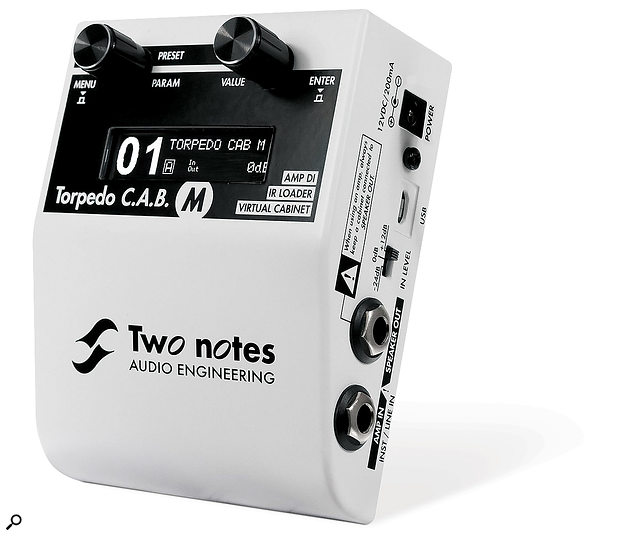 Although the Torpedo CAB M looks rather like a stompbox, if you look a little closer you'll notice that there's nothing to actually stomp on, because its tough metal case has no footswitch. So what is it, exactly? Well, Two Notes Audio Engineering describe this product as the missing link between a guitarist's or bassist's own rig and either a live-sound console/PA system, or, when in the studio, an audio interface or recorder. In other words, it's essentially a compact, pedalboard-friendly version of their more established Torpedo hardware.

The CAB M's input jack has a sensitivity switch offering the choice of -24, 0 or +12 dB, for maximum input levels of +40, +16 or +4 dBU, respectively. This means it can accept instrument-level, line-level, and even speaker-level signals, so the device may be used after a preamp or pedal, inserted at the appropriate point in a chain of discrete pedals, or patched between an amp and its speaker cabinet to provide a DI feed. Note that unlike, say, the Universal Audio OX or the Boss Waza Tube Amp Expander, the Torpedo CAB M doesn't present your amp with a dummy load, and it should not be used after an amp's speaker output without a loudspeaker or suitable dummy load connected (this is especially important with valve amps, which can sustain damage if the output stage is not loaded). The CAB M's thru jack allows a load or speaker to be connected, though, and Two Notes offer a separate product, called the Torpedo Captor, which can be used to safety load or attenuate a valve amp of up to 100W.

The CAB M's individually bypassable sections can provide power-amp and miked-cabinet modelling, along with a choice of room acoustics plus post-processing EQ. Like other Two Notes products, it uses convolution impulse responses (IRs) taken from a range of guitar/bass speakers to reproduce the sound of real loudspeakers miked in a real space, and out of the box, the Torpedo CAB M comes with a library of 32 cabinets and eight microphone types. More cabinets can be bought from the Two Notes online shop, and you can also load in your own WAV/AIFF-format IRs, up to a maximum length of 200ms — the Remote software includes sample-rate conversion, via which your IRs will automatically be converted to the 48kHz required by the pedal. And if you're keen to capture the sound of your own miked amp/cab rig, you can also create your own IRs using the free Torpedo BlendIR software.

The Remote software for Mac OS and Windows computers makes editing presets and loading new IRs easy.The virtual miking setup includes two microphones, and the distance and lateral placement of each mic relative to the speaker axis can be adjusted independently. The power-stage amp models provide a choice of four different tube types (6L6, EL34, EL84 and KT88) in four permutations: single‑ended or push-pull with a choice of triode or pentode operation. If you're taking a feed from your own amp's speaker output, this section would usually be bypassed, but if you're coming straight from a pedalboard or preamp, it adds real amp voicing that includes a small amount of saturation. The post-processing EQ section offers three choices: guitar, bass or 'custom'. The guitar and bass settings have graphic EQ-style frequency points appropriate to most instruments, while Custom gives you a parametric EQ should you need to do your own thing.

The CAB M hardware is controlled via two turn-and-push encoders, and a small, backlit OLED window shows the Mode, Amp, Cab and Post-EQ status when editing. On the left side of the case we have a balanced XLR DI output with ground-lift switch, a balanced TRS line-out jack, a 3.5mm mini‑jack aux input and a 3.5mm headphone output. The company logo lights up on the back face of the pedal (presumably so that the audience can see what you are using!), and hidden away at the top of this panel is a small slot that takes the included micro SD card, which is used for storing patch information and IRs.

Power comes from an included 200mA 12V DC adaptor, and a USB port caters for connection to a computer running the free Remote app.

The aforementioned OLED display offers Perform and Menu views. In Perform mode you get to see the preset name and number, and if the preset name is too long to fit, it scrolls across the screen. Here, performance changes can be made, such as adjusting volume, without affecting any settings. By contrast, the Menu environment provides full editing access to the parameters and shows, at its top layer, icons for Mode, Source, Cabinet, Amp and EQ, to allow the various sections to be targeted for editing. Pressing the encoder switches between Perform and Menu views.

The Torpedo CAB M can accept instrument‑, line‑ or speaker‑level inputs, which means it can be placed after a pedal or preamp, or between an amp and its cabinet.The Remote software makes light work of setting up the various sections, saving and loading presets and loading new cabinet models or IRs. (Note that the online button should be switched to off if you only want to see the included speaker cabinets — if left on you'll also see all the models available in the store, which you can either demo or buy.) The main window shows a representation of the amp in a room at the right-hand side of the screen and the various processor sections presented as rack gear at the left. In Edit view, the Mode box selects which mode you will be working in: Arcade, Simulation or IR Loader. Arcade is a simplified mode with fewer controls, each of which actually adjusts several parameters behind the scenes. For example, the power amp is controlled by a Warm/Cool slider rather than asking you to choose valves and their configuration. Arcade asks you to select what instrument is being used as a source and it configures itself accordingly. For the power user, Simulation mode provides full access to all parameters.

It's also possible to control the Torpedo CAB M via Bluetooth from a tablet or phone using the Torpedo Wireless Remote app, which provides full parameter access but does not support the loading of new cabinets or IRs. When using Bluetooth to connect a phone or tablet, you'll need a PIN number, which is given in the manual. When the Torpedo CAB M is connected to a computer, the memory card contents can be read, written or erased as if it were an external drive, but note that when memory card is mounted in this way the CAB M's controls are locked out. Firmware updates can also be handled via the USB connection to your computer. 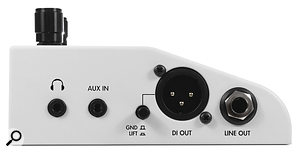 On connecting the Torpedo CAB M to my Mac, and having downloaded the Remote software already, I got a message telling me a firmware update was available; updating the unit took only a couple of minutes and was pretty much automatic. The Remote app makes editing extremely simple and allows user presets to be stored or recalled. I found working from the unit's front panel fairly logical, but you can get most of the work done via the app, and it certainly saves time and will be rather easier on the eyes too!

The factory presets are divided into sets of two, one with and one without the power-amp emulation — as I mentioned above, when using the CAB M with a 'real' amplifier, the power-amp emulation would normally be switched off since your amp will already be taking care of that part of the sound. Being able to try different types of speaker cabinet and miking options makes even the most basic amp much more versatile. For instance, I tested this with a cheap-and-cheerful Bugera 5W combo and obtained very convincing results. You do have to be careful in choosing the best attenuator setting, though, as if you use too much input attenuation, you can end up with some undesirable background noise. As a rule, you need the minimum attenuation for instrument inputs and one of the two higher ones for loudspeaker-level signals. For the small Bugera amplifier, the middle attenuation setting worked best.

Putting a pedal directly before the Torpedo CAB M and selecting presets with the power amp engaged also gives good DI'ed results, though your choice of drive pedal inevitably has a significant influence. I found the EQ invaluable in shaping the final tone, though in some cases you might want to add a spring reverb using another plug-in or pedal, as all of the Torpedo reverbs are based on real room ambiences — though a gentle application of the Cathedral reverb makes a good stand-in. 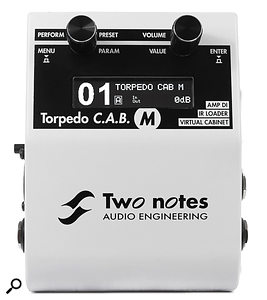 Pretty much all editing functions of the software are possible, even if some are a little fiddly, via the two push/turn encoders on the hardware.To test the IR import facility, I tried some of my 44.1kHz Celestion IRs, and they imported directly into the Remote software using a simple drag-and-drop routine, and from there they were easily converted and saved into the Torpedo CAB M. So the sample-rate-conversion works well, and so too does the IR loading side of things.

This all adds up to make the Torpedo CAB M a very versatile and genuinely practical alternative to miking up your amp. It delivers the kind of performance we've come to expect from Two Notes, and conveniently it takes up very little space. It has a number of applications for both stage and studio use, because you can bypass any of the sections and can therefore choose which part of the chain you want it to replace. Even if you get good studio results when miking your amplifier, there could be an advantage in also recording to a second track via the Torpedo CAB M loaded with a different type of speaker, as it will give you more mixing options and also allow you to introduce some stereo spread really easily when mixing. And for live use, getting an authentic-sounding DI feed from your amplifier avoids all the hassle of miking, it eliminates spill issues and gives a consistent sound, and again allows you to choose a different cabinet than the one you're monitoring through. All in all, then, this is a very well thought-out little box for a reasonable price.

Some of these features can be found in more feature-rich modelling devices, such as the Line 6 Helix and the Atomic Amps Amplifire, but for cabinet modelling only there's the BluGuitar BluBox or the Digitech CabDryVR. If you're also in the market for an audio interface, the Audient Sono has Torpedo technology built-in and also works with the Remote app. And if you need a reactive dummy load built in, rather than as an add-on, the Universal Audio OX and the Boss Waza Tube Amp Expander tick the right boxes.

The CAB M offers all the joys and the great sound of a big Two Notes Torpedo system in a neat, stompbox-sized package with a useful software editor.