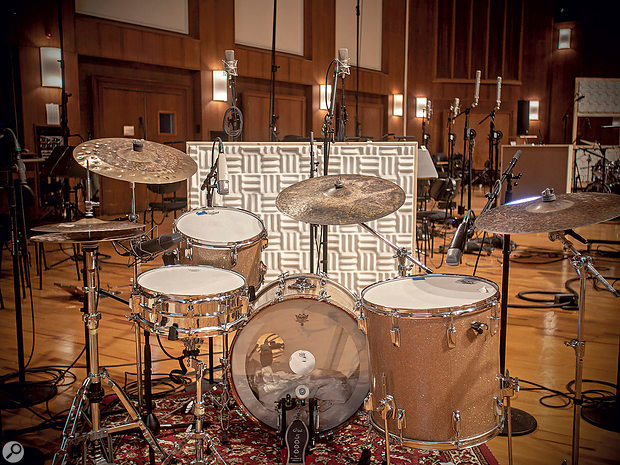 VSL push out the boat with hall-recorded rock power drums and two top of the range grand pianos.

Vienna's Synchronhalle has had its ups and downs. Constructed in 1940 as a film studio scoring stage, it became a go-to classical recording facility during the 1960s, spawning legendary recordings by eminent artists such as Karl Böhm, Herbert von Karajan and Yehudi Menuhin. In later years it fell from grace and became dilapidated, but it was saved from demolition by a 2009 preservation order — ironically, this was mainly due to the hall's unique theatre organ, a multi-timbral mechanical marvel equipped with horses' hooves, bird calls, car horns, ocean waves and thunder sound effects (perfect fodder for your next ambient chill-out project).

In 2013 the Synchronhalle's fortunes took an upturn when the building was taken over by Vienna Symphonic Library, renowned for their vast database of orchestral samples. The company had been planning to expand for some years, and this acquisition provided a timely opportunity; according to VSL founder Herb Tucmandl, "We could not have built a building this size from scratch. We were lucky that it became available at the same time we were looking."

After two years of refurbishment, the site was transformed into a state‑of‑the‑art recording facility and re‑christened the Synchron Stage. Orchestral test recordings conducted with award-winning film music mixer Dennis Sands prompted the engineer to remark, "Truly a world class facility — certainly, one of the best rooms in the world." A rush of bookings followed, with Hans Zimmer's Remote Control Productions, Sony Pictures Entertainment and Netflix among the first clients, marking a return to the halcyon days of Vienna film scoring. 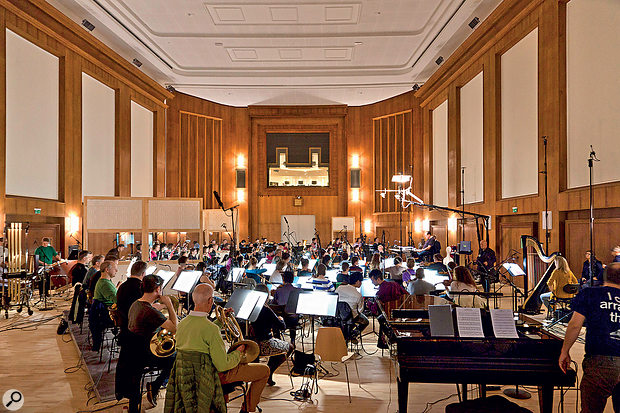 Hitherto, all Vienna orchestral libraries had been recorded in the Silent Stage, a purpose-built environment so effectively noise-proofed that even a helicopter hovering overhead failed to stir the VU meters. While this space is a great acoustic for capturing close-up instrumental clarity and detail, it lacks the flattering reverb 'wash' of a concert hall. With the Synchron Stage at their disposal, VSL could now produce their own hall‑recorded sample collections, joining the ranks of rival developers who had been taking a similar approach for years.

See the 'VSL Synchron Series' box below for an overview. In this review we'll take a listen to the three most recently released libraries, starting with a distinctly non-classical rock drum collection.

While it was obvious that VSL would use their new sound stage to create a fresh batch of orchestral libraries, no-one could have guessed they would also veer off into the world of heavy rock. For the Synchron Power Drums collection the company hired drummer Mario Lackner, veteran band member and professor at Vienna's University of Music & Performing Arts. Don't let the highfalutin' title put you off: this dude sports a no-nonsense beard, hits the drums hard and rocks out in a baseball cap, mercifully not emblazoned with the slogan 'Make Austria Great Again'.

The library comprises single hits, flams and rolls played with sticks (undamped and damped) and hotrods on three deep‑sampled classic drum kits: a 1975 Sonor Acryl Champion Vintage set, a 2017 Tama Star (Tama's current flagship) and a Tama Superstar set dating from 1972, widely spaced in the large Synchron Stage and sampled with up to 10 velocities and six alternations for each hit. 'In place' presets maintain the left-centre-right placement of the three kits in the hall, while 'centered' patches pan each kit into the centre of the room. The drums were recorded from 19 microphone positions, listed in the box below.

Synchron Power Drums ships with its own MIDI player and a great set of MIDI grooves in various time signatures which can be dragged into your sequencer. Each groove has a multi-kit version which assigns a different part to each kit. Since the Synchron Player holds only one kit at a time, you'll need three instances (set to MIDI channels 1, 2 and 3) to hear these multi-kit concoctions at work. The grooves feel great and are very well programmed, with an emphasis on thunderous, propulsive tom patterns.

A 'humanise delay' function lets you control the timing of each drum and cymbal, allowing you to add what VSL call "a little bit of that beautiful human inaccuracy" to the patterns. There are two schools of thought on this: some hail human timing variations as a valuable expressive asset, while others believe they should be ruthlessly eradicated. In the latter camp is my colleague Gavin Harrison, a member of the current three-drummer incarnation of '70s rockers King Crimson, whose views on so-called 'beautiful human inaccuracy' are unprintable. Personally, I feel such micro-timing issues are better handled manually, but this automated feature may occasionally be useful.

Having compared the principal samples of the three kits, I decided the Sonor is my favourite: I like its beefy snare and big, bouncy, weighty kick, and loved its clean, resonant, open-sounding and clearly pitched toms, which sound great across their dynamic range. That said, I can also see myself using the Tama Star's kick and both Tama kits' cymbals and hi-hats. Of course, these are purely subjective opinions based on personal taste!

Listening to the muscular, blasting, crunching and bollocking racket this library can produce, I felt the presence of Led Zeppelin's John Bonham.

Built-in effects include a five-band parametric EQ, convolution, plate and room reverbs, delay, chorus and a deeply psychedelic phaser. You can render the sound lo-fi with 18 different types of filter, massively squash it with a compressor, or use the brilliant saturation effect to distort it to the point of destruction. To help you get to grips with the effects and the 19-channel mixer, VSL created a useful set of presets ranging from basic room mixes to heavily processed stylings. In the latter category are the 'Doomed' and 'Bam' presets, which use parallel compression to crank up the energy levels. Listening to the muscular, blasting, crunching and bollocking racket this library can produce, I felt the presence of Led Zeppelin's John Bonham.

On a more subtle note, the mixer's 'Bleed' tab offers control of the amount of spill from each of the close mics onto other channels. This is explained in some detail in a video walkthrough, but there's no mention of it in the manual. Another useful feature is the sample mapping display, which shows the sound and playing style assigned to each key: an invaluable aid to programming. What's missing? Personally I'd have preferred mallet hits to hotrods, but that's just me. A more surprising omission is that although you can globally tune the kits a semitone up or down, there's no way of tuning individual drums. If you want to drastically detune a sample, you have to use pitch‑bend, which affects the entire kit.