Moving on to VSL's Synchron pianos, we come to one of the jewels in the company's crown: a magnificent Hamburg‑built Steinway D‑274 concert grand, hand picked from eight Steinway D models by Stefan Mendl, founding member of the Vienna Piano Trio. Acknowledged as one of the best makes in the world, the instrument was recorded simultaneously from 11 mic positions in the Synchron hall, adding a pleasing natural ambience to the piano's rich timbre. 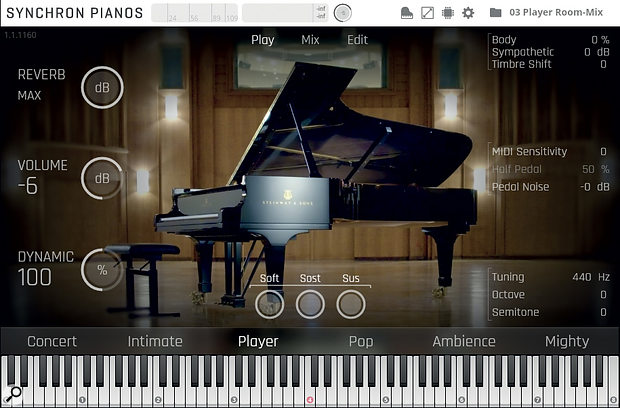 The D‑274's specs are impressive: using a motion-controlled 'robot finger', VSL captured more than 100 velocities and release samples of different speeds, depending on the preceding note length. Soft (una corda), half-pedalling and re‑pedalling options are included. As a result, each mic position loads around 20,000 samples, which points to the need to run the Synchron piano libraries on an SSD drive. To cope with these demands, VSL developed a dedicated Synchron Pianos player with a built-in parametric EQ section and algorithmic reverb. Though there is no compelling reason to do so, you can apply individual EQ, volume, dynamic range and tuning settings to each note!

I enjoyed the big, expansive sound of this fine instrument; its combination of a balanced tone and distinct attack across its entire range make it highly playable, and it goes without saying that the ultra‑deep sampling recreates every nuance of the sound. While this piano's grand, stately and somewhat formal atmosphere evokes the world of classical music, there's no reason why you shouldn't use it for other popular styles.

If VSL's Concert D‑274 is the grandfather of the Synchron piano range, the baby would have to be the Yamaha CFX. This excellent 9-foot concert grand is fitted with Yamaha's computer-controlled Disklavier Inspire Pro reproducing system, which senses every movement, note-on velocity and release velocity of the 88 keys and pedals, including half-pedalling. The system also allows for accurate reproduction of playing techniques such as rapid note repetition and softly-played notes. Despite the automated playback, sampling sessions for the Yamaha CFX extended over several months and generated a huge amount of sample data.

Cutting to the chase, I found this piano to be strong and tonally well blended. Less obviously grandiose than the Steinway D‑274, it nevertheless works well for attacking rock riffs, with high velocities sounding agreeably forceful. While Yamaha pianos are known for their bright, clear, powerful and assertive tone, this model also has a very nice, delicate liquid response when played quietly, making it a good vehicle for reflective lyrical improvising. In that regard, the ability to fine-tune the velocity curve and MIDI response settings proved invaluable in calibrating the piano to my touch.

Listening to the individual mic channels, the Schoeps MK4 condenser mics used for the 'Close 1' position have (unsurprisingly) slightly more sparkle than the 'Close 2' Royer SF-24 ribbon mics — while 'Close 1' works well for pop, the more rounded, mellow, comparatively muted tone of the ribbon mics may appeal to those seeking a more traditional 'classical' piano sound. A good halfway house would be the soft‑pedal samples, which have a lighter, very pleasant tone. 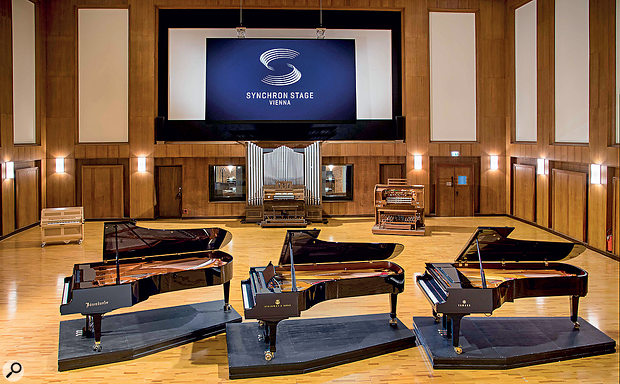 As with Synchron Power Drums, VSL provide presets which demonstrate the tonal possibilities of their two pianos, ranging from intimate close perspectives for ballads to spacious, ambient mixes for film scores and soaring piano melodies. The bright-sounding 'Pop' preset is optimised for songwriters and live band performances, while 'Player' (my favourite) gives you the direct, authentic wide‑stereo sound of the pianos with a healthy helping of hall acoustic and a dash of additional reverb.

Choosing the right sampled piano for your music is rarely a simple matter, and depends very much on personal taste. No two products are the same: the make and condition of the piano, recording techniques and room sound will make an enormous difference. To help narrow the choice, VSL have supplied useful comparisons of their six Synchron Piano presets on their respective product pages' 'Presets' tab. You can also hear the affable classical pianist Stefan Mendl putting all the Vienna pianos (including the older Bosendorfer 290 Imperial) through their paces in the Synchron Stage at VSL's Concert Grand Comparison on YouTube.

Synchron Power Drums runs exclusively on VSL's Synchron Player, while Concert D‑274 and Yamaha CFX require the dedicated Synchron Pianos Player — the player software is provided free when you buy a library. Unlike VSL's older Vienna Instruments player, the Synchron players have no stand-alone version: most users will install them as a plug-in inside their DAW, but it is also possible to run them on your desktop in an AU/VST/AAX host, for which the excellent Vienna Ensemble Pro comes highly recommended.

VSL's website lists identical system requirements for the three libraries, the main caveat being that you need a 64-bit operating system (older 32-bit systems are not supported) and a solid‑state drive (SSD), along with a minimum of 8GB of RAM. Each library has a standard and full version. There's no difference in musical content; the full version simply offers extra ambient mic positions, which will be particularly useful for surround mixing. However, the essential sound of the instruments and hall is fully represented in the standard versions. To save disk space, individual microphone data can be removed after installation.

VSL say their total sample count now exceeds three million. I haven't counted them recently so shall have to take their word for it, but from what I've heard so far it's clear that the creative impetus and multiple mic position opportunities provided by the Synchron Stage hall look set to engender a few million more. In the meantime, I can heartily recommend these excellent, versatile drum and piano libraries for many styles of music.

With these collections, it's all about the hall. Sound libraries and expansion sets featuring vintage drum kits are invariably recorded in a studio or, at best, large room acoustic, and though some 'cinematic drums' titles feature bass drums, toms and large ethnic drums recorded in a concert hall, I couldn't find one that includes rock drum kits. This may indicate that, as things stand, Synchron Power Drums is technically one of a kind.

VSL's first Synchron Stage release was announced in May 2017. Featuring 16 essential orchestral percussion instruments and drums (including timpani and tuned percussion) and consuming 475GB of disk space, Synchron Percussion I was the first Vienna orchestral library to be recorded outside of the Silent Stage studio, and the first to feature multiple, surround-ready mic positions, several of which utilise the Auro 3D 'immersive sound' technology.

The original plan was to release VSL's new Synchron Player software at the same time as Synchron Percussion I, but that didn't work out. Hence, early Synchron library buyers had to run them on the old Vienna Instruments player. When the Synchron Player was finally released in June 2018, these buyers were then obliged to re-download all the samples to achieve Synchron Player capability — though no cost was involved, some criticisms were levelled at the delay and inconvenience.

Synchron Power Drums comprise three classic hall-recorded drum kits which come with a great selection of ready-to-rock MIDI files. You can use individual drum channels to create close-up, dry mixes, or dial up the ambient and surround mics for an epic, blasting hall sound. Transformative effects such as parallel compression and distortion add a contemporary edge. Alternatively, If you're in the market for a classy, hall-recorded sampled piano with plenty of mic position options, VSL's top-of-range Steinway Concert D‑274 and Yamaha CFX concert grands are as good as they come.