Important though all the setting up is, when you're actually playing through the Volante its footswitches really come to the fore. The On (off being your chosen bypass mode) and Tap (tempo) are both familiar delay pedal functions, but the footswitchable Infinite and sound‑on‑sound modes, which can be entered from any preset, add a most interesting dimension to what's already a superb magnetic tape‑echo emulator. 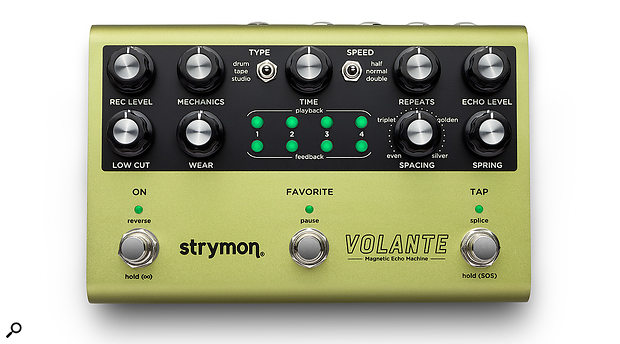 The basic controls of the Volante are fairly intuitive — although as there's also much more extensive functionality hidden from view, it's definitely a good idea to read the manual if you want to make the most of your investment.In normal echo delay operation, holding down the On footswitch takes you into Infinite mode, which disables the virtual record head and loops the current delays without degradation for as long as the footswitch is held down.

Sound‑on‑sound mode, accessed by holding down the Tap footswitch, is a true loop recorder, with three possible maximum record times depending on the Speed that you're running at (16s at double speed, 32s at normal and 64s at half speed). SOS mode is entered and exited by holding down the Tap footswitch. As with the echo delay functions, the lower the speed, the lower the fidelity, and the more that the Mechanical artifacts will come to the fore. Once in SOS mode, the Tap footswitch's function changes to Splice, with the first press entering loop record and a second press exiting record and automatically starting loop replay in overdub mode. Since the virtual record head is always active in overdub mode, over a period the recorded loop will degrade, giving you the ability to create changing loops.

The Infinite and sound‑on‑sound modes... add a most interesting dimension to what's already a superb magnetic tape‑echo emulator.

Overdub mode is always active during loop replay, unless you go into Infinite mode, which is entered and exited by holding down the On footswitch. This again disables the virtual record head and continuously replays the currently recorded loop, without any degradation, until the footswitch is again pressed and held. Tapping the On switch reverses the loop replay — so if you tap it in overdub mode, you can record over the reversed loop.

Loop replay is paused and restarted by tapping the Favorite footswitch, and pressing and holding that switch gives you the effect of physically stopping and starting a tape loop mechanically, with the familiar pitch drop as the tape slows to a standstill and then, when released, the pitch rise as the tape comes back up to speed. Incidentally, in SOS mode with no loop recorded, the Infinite, Reverse and Pause functions can all be applied to the echo repeats.

There's much else in the Volante that I haven't the space to cover here — if you're interested in exploring the minutiae of its operation I'll have to point you, once again, to the various Volante videos and other guidance on Strymon's website — but hopefully I've given you a good taste of what's on offer.

Playing with the Volante was, for me, a complete and absolute blast, and there's absolutely no way that the review unit is going back to the distributor! I've used tape loops, a WEM Copicat, an Akai Headrush (the original delay pedal version), various TC Electronic digital delays and more over the years and, to put it simply, none have been as much fun or as musically fulfilling as the Strymon Volante — if I had to pick one standout feature, I'd have to pick three! They would be: the variation in echo patterns made possible by the continuously variable replay head spacing and individual playback and feedback switching; the degree of control over the way the SOS loop degrades over time in Overdub mode; and the finesse of the Volante's editing capabilities. If you're as much into magnetic echoes as I am, then the Strymon Volante is an outstanding bargain that you'll want to own. Highly, thoroughly and unreservedly recommended.

Assuming that, like me, you haven't got the budget for a refurbished original Binson Echorec 603-T, WEM 'Super IC' Copicat, Maestro Echoplex EP-3, or Roland RE‑201/501, you'll find a good few emulations around — although none have quite the capabilities of the Strymon Volante. Notable brands to explore are Catalinbread, Dawner, Dunlop, EarthQuaker Devices, Empress, Mr Black, Roland and Wampler.

Despite the fact that there's not a magnet in sight, the Strymon Volante is not only a highly authentic emulation of the three major vintage mechanical echo/delay types, but also adds features and facilities that the early developers could only have dreamt of.