India may be a growing force in most industries these days, but few Indian pro‑audio companies have made it into Western markets. Can Sonodyne's speakers change all that? 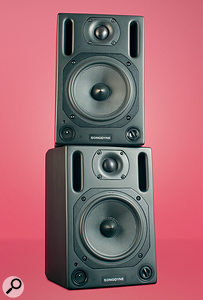 Sonodyne is an Indian electronics manufacturing company, the brainchild of Ashoke Mukherjee, who set it up in Kolkata in the 1960s, originally to produce battery eliminators. In the years that followed, the company started manufacturing hi‑fi electronics, record turntables and loudspeakers — all to great acclaim in India and increasingly around the world — and in the early 1980s an export division was set up in Mumbai's Special Economic Zone, to produce professional audio and power electronics equipment.

The company have always been engineering‑ and research‑led, producing both Sonodyne‑branded and many OEM products for the high‑end home audio, professional studio and PA markets. The Kolkata factory is entirely self‑contained, with an in‑house aluminium die‑casting operation, CNC machining, metal painting and anodising, a woodworking shop, SMT circuit‑board production lines, and full manual assembly, test and measurement facilities.

The SM 50AK nearfield monitors we have under review here take advantage of the company's aluminium‑casting capability, mentioned above, as they employ a 6mm‑thick cast‑aluminium cabinet, finished in a black, textured paint. Measuring 180 x 262 x 220mm (WxHxD), the SM 50AK is the smallest studio speaker in Sonodyne's range. There are currently two larger siblings: the SM 100AK, which boasts a 6.5‑inch (160mm) driver, and the SM 200AK, with an eight‑inch (200mm) bass driver. There's also a partnering powered subwoofer, the SLF 200A, which uses a 10‑inch (254mm) driver.

The compact SM 50AKs weigh a surprisingly hefty 6.3kg each, and are shipped with a strong fabric drawstring bag to protect them when not in use, or during transit. Viewed from the side or above, the reflex‑ported cabinet is a trapezoid shape, narrowing towards the front in both dimensions, presumably in an attempt to reduce internal standing waves. The front baffle also leans backwards towards the top, to aid with driver time‑alignment. Overall, the speaker's styling is highly reminiscent of a former product line from a certain Scandinavian speaker manufacturer, with vertical flared slot ports either side of the 1.1‑inch (26mm) silk soft‑dome tweeter (the SM 50AKM variant model uses an aluminium‑dome tweeter instead). The 5.5‑inch (130mm) long‑throw mid/bass driver apparently uses a Kevlar cone material with a conical centre dust cap, suspended within a die‑cast metal chassis, and both drivers are magnetically shielded.

The specifications supplied in the manual seem good, with a claimed frequency response of 70Hz‑22kHz (±3dB), extending out to 60Hz-25kHz, with a ±10dB margin. These figures reveal the very steep bass roll‑off inherent in this kind of compact speaker, and the gentler HF roll‑off. Dispersion above 5kHz is quoted as 75 degrees horizontally and a surprisingly wide 70 degrees vertically. The latter might cause problems with early reflections from the work-surface or ceiling, and that should be borne in mind when auditioning this speaker.

The electronics chassis provides 45W of power for each driver, with a fourth‑order active crossover centred on 2.5kHz and a second‑order 60Hz subsonic filter. Comprehensive protection circuitry guards against over‑current and over‑temperature, as well as RF interference and switch‑on/off transient thumps. The maximum continuous SPL figure is given as 104dB at 1m in half‑space.

Deeply recessed DIP switches on the rear panel provide tonal and room‑correction options, with a treble tilt‑shelf response (‑2dB above 4kHz), and bass‑tilt options of ‑2dB and ‑4dB from 80Hz (or ‑6dB with both used in combination). These are intended to compensate for placement near boundaries, while a separate bass roll‑off (6dB/octave from 100Hz) enables the speakers to handle louder monitoring levels when the bass is being handled by a subwoofer. Also hidden away in the recess is a rotary gain trim with a range of ±6dB (the nominal input level is 0dBu). A small screwdriver will be required to adjust the gain trim or the DIP switches.

The power on/off switch (with associated blue LED) and operational volume control are placed on the front baffle either side, below the bass/mid driver — and that will please a great many potential users: one of the most common complaints I hear about active speakers relates to power switches and gain controls being inaccessible on the rear panel! Input connections comprise balanced XLR and quarter‑inch TRS sockets, mounted in another recess so that the connectors and cables hang vertically. Mains power is via a standard fused IEC connector, and the unit operates on a single, fixed voltage (230V AC, in the case of the review model). A pair of threaded inserts in the base is provided to secure the speaker to optional or third‑party mounting brackets. 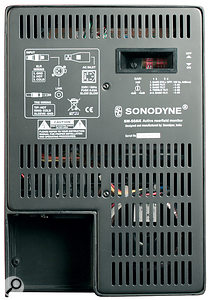 DIP switches on the rear panel of the SM 50AK provide tonal and room-correction facilities.

The SM 50AKs appear to be built to high standards, are certainly well finished, seem comprehensively specified, and are obviously designed with thoughtful facilities. The polar‑ and frequency‑response plots published on the manufacturer's web site (but not included in the otherwise usefully detailed manual) look plausible, although you have to look closely to realise the polar plots are at 7, 10 and 14kHz. The heavily averaged frequency‑response plot reveals a generally very flat response from 100Hz up to 4kHz, with two distinct peaks above that, of roughly 2dB, centred on 5.5 and 10kHz.

As the manual promises, switching the SM 50AKs on (or off) is entirely thump‑ and click‑free, which is a nice touch — although I was surprised at the level of background hiss from the amplifiers, which seemed a little high for such a modest power output. In extremely quiet control rooms and with close nearfield positioning, this background hiss could become frustrating, but I doubt it will trouble many in the project studio arena in practice.

I set the speakers up in the standard equilateral-triangle formation, with a base length of roughly 1.5m — and typical nearfield positioning, well clear of walls and floor. As usual, I started my auditioning with my long‑serving spoken‑voice test track, which revealed some mild upper‑mid coloration. Overall, though, these little speakers are pretty neutral and resonance‑free, and the level of fast, accurate detail through the mid‑range was impressive. The high treble is very open and airy, with lots of detail, but certainly not overblown. Even in my slightly bright‑sounding room, I didn't require the HF tilt, which is another good sign; speakers with a brittle, exaggerated top end really do sound hard in my room! Stereo imaging is solid and precise, with reasonable depth on appropriate material. The speakers don't seem too fussy about toe‑in angles or positioning generally, which is a good thing, and the overall tonal balance is pretty good for a box of this size.

The bass response is tight and tuneful when they're used as nearfields, although (not surprisingly) it lacks weight and power, particularly if pushed hard — when the amplifiers quickly reveal the strain they are under. I felt that the tonal balance became unacceptably thin and lightweight when working at distances of much more than 1.5m, although placement near side or rear walls does help to counteract that impression to a degree. Fundamentally, though, there's a finite limit to what can be done with a 5.5‑inch driver in a small reflex‑loaded box with a 45W amp behind it! I can't imagine many people would feel the need to use the bass‑tilt equalisation options, even when the speakers are placed close to walls, and integrating SM 50AKs with the partnering subwoofer would make sense in larger spaces or if high volume monitoring is required. Alternatively, of course, larger models in the range should offer improved bass response.

The real strength of these monitors is in their mid‑range detail and spacious stereo imaging, with enticing treble precision — and those things are key to building accurate mixes. Balancing bass instruments requires constant referencing to commercial tracks — at least, until you become familiar with the sound presentation of the SM 50AKs — but I found it relatively easy to construct test mixes that travelled well, and EQ decisions came quickly and unambiguously, which is always a good sign.

The SM 50AK is fighting in a very competitive part of the budget monitor‑speaker market, but it stands comparison with its peers well and has some useful strengths. As a relative newcomer — to the UK market at least — Sonodyne have made a good impression with this reviewer, and I'm intrigued to discover what the larger SM models are capable of.

This is a fiercely competitive part of the active speaker market, with some very established and strong competition. The most obvious alternative is the Genelec 8020B, which is similarly priced, but the ADAM A7 and KRK VXT6 are also strong contenders in this price bracket.

This solidly built speaker performs very well, and has particular strengths in its mid-range and HF detail and stereo imaging. The bass response is inherently restricted, but when used in the near field is well balanced and usefully revealing.