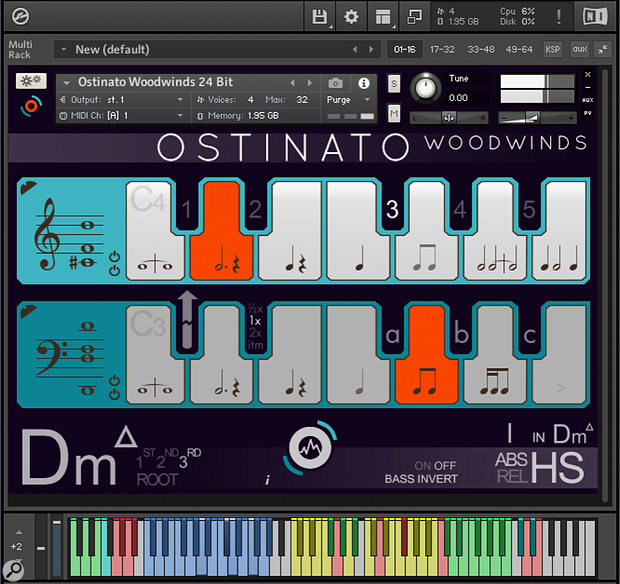 Sonokinetic are well known as one of the main players in the phrase-based library field. Their orchestral products offer you a vast choice of entire phrases that conform to DAW tempo via Kontakt's time-stretch features. What you lose in compositional flexibility you more than gain in the sheer quality and unquestionable realism of the end result, not to mention ease of use.

Ostinato Woodwinds is the latest 'Ostinato' series product, joining existing Brass and Strings libraries. They're all cheaper by a factor of three than some other Sonokinetic offerings, because they swap a colossal phrase repertoire for a much more focused vocabulary of less than a dozen motifs, ideal for minimalist rhythmic beds and pads.

Control of Ostinato Woodwinds is heavily keyboard-driven: certainly not some kind of drag-and-drop thing, and you do actually 'play' it. The Kontakt interface is as initially perplexing as I've come to expect from Sonokinetic; until you spend five minutes with the PDF manual or quickstart video, from which point it seems wonderfully clear and streamlined.

The general idea is to play chords in the blue keyrange (all nicely colour-prompted on NKS-compatible MIDI controllers), and immediately Ostinato will strike up, using rhythmic motifs selected in the main treble and bass row graphics, which take the form of a keyboard layout. Switching rhythmic combos for low and high instrument groups is a matter of one or two note presses. Playback volume is tied to the mod wheel, so swells are easy to do.

Transitions between chords and patterns are impressively flawless, and it's great to see voicings (of the two flutes, oboes and clarinets, bass clarinet, bassoon and contrabassoon) notated in the stave area. Also, while replay of two upper and two lower samples forms the full voicing by default, any of them can be disabled individually with a little 'power' icon. That adds tremendous flexibility to isolate top lines and bass lines, or any other combo. Individual layers can be balanced and panned too.

There's more clever stuff, with the option to have full-time root position chord playback or 'as played' inversions. Musical key can also be set prior to playback or recording, and a green Harmonic Shift key-range used to cue the most appropriate chord and inversion for each degree of the scale with one finger. Five further preset voicing variation key triggers and three eight-step inversion sequencers all add to the musical variety achievable, and almost completely eradicate any vestige of home organ 'auto-accompaniment' practice.

Patches are provided in both 16- and 24-bit versions with adjustable close, Decca, far and wide mic feeds, and also a resource-saving pre-mixed mic perspective. All run in Kontakt or Kontakt Player 5.8 or later, quite efficiently.

My lone criticism is that because the source material was all recorded at 130bpm, a hint of warbly stretching is perceptible high in some voicings when you use lower bpms. It's not a deal-breaker, though, and in every other way this is a fantastic library, keenly priced, and much more flexible than it might at first appear. Stand aside Nyman and Adams, I'm coming through!