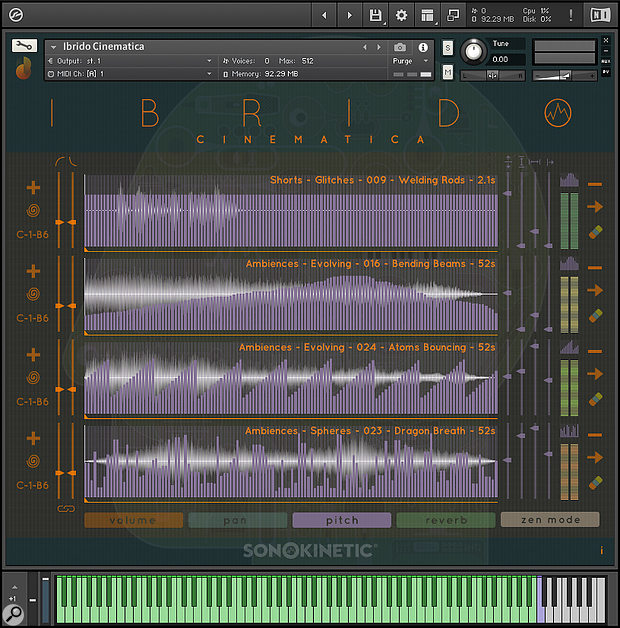 Automation overlays (pitch is shown here, with four samples loaded) let you twist the original material out of recognition.

Want your spine chilled and your nerves jangled? Sonokinetic are on the case.

This first release in a new Sonokinetic 'hybrid' product series focuses on futuristic cinematic textures, atmospheres, hits and drops. Like its more expensive orchestral‑series counterparts, Ibrido CInematica uses a chooser interface to load fully formed, production-ready samples into four playback slots. These are then triggered together or independently with MIDI notes, either live, or sequenced from your DAW. Where it differs from the orchestral libraries is that the samples don't conform to DAW tempo or follow your harmony: most have no discernible rhythmic or harmonic content. But with many playback features capable of modifying and shaping the original material in quasi-musical ways, this compendium of out-there effects could, I think, still offer as much to the electronica/dance producer as to the film/TV/game composer.

Ibrido Cinematica runs in Kontakt (and Kontakt Player) 6.2 and up, and is compatible with Komplete Kontrol/NKS 1.5 or later. It's Sonokinetic's first library that has optional spoken parameter and value narration, which can be useful for visually impaired users. Samples are all 44.1kHz, 24-bit, and the installed size on my Mac was 3.5GB. Installation, authorisation and updates are handled by NI's Native Access app, and as is typical of Sonokinetic products, the supplied PDF documentation is first-class. There's also an excellent video tutorial on the Sonokinetic website that covers every feature in about 10 minutes flat, and is useful at least to decode some of the more cryptic user-interface elements.

The library is based around 360 samples organised into four main groups: Ambiences, Shorts, Noise & Drops and Shine & Crush. That may not sound like very many, but as the majority are towards a minute long, it actually adds up to hours of content. You explore and load them using a mouse or NKS-driven chooser, in which everything is descriptively named and durations are given. Every sample also has a preview button which gives a brief taster of how it sounds. Combinations of samples can be painstakingly assembled, or you can opt to load four at random, which can be inspiring and at least a good starting point for further explorations.

Everything is skewed towards sci-fi, horror and fantasy, being mostly electronic, complex and edgy in style. Cinematic yes, but decidedly not for rom-coms or historical dramas!

By default, all phrases are triggered across a wide C-1-B6 MIDI pitch range. They change pitch and duration across the range too, in old-school fashion, and there's no attempt to preserve pitch or duration as either changes. This is good, actually, because it lets you mine the often weird character that ensues with pitch extremes, and of course those minute-long samples will end up far longer played down two octaves. However, it's still easy to set a more restricted note range for a slot, which allows it to be triggered independently from others. Each also has adjustable attack and decay times for volume (up to several seconds) and multiple playback direction and looping modes (to turn drops into builds, set up build/drop combos and much more besides). Meanwhile, adjustable sample start points and loop regions let you zone in on sample regions of your choice. Sample playback is monophonic, by the way, but legato melodic playing will seamlessly change pitch over the course of playback, and using long samples it is certainly possible to eke out weird almost-melodic lines that ebb and flow as they go on. Very interesting. At all times, playback volume can be controlled in real time from your mod wheel. 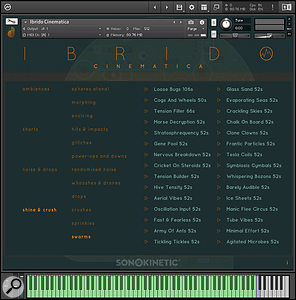 The phrase chooser.Significantly more shaping potential comes via a graphical automation scheme for volume, pan, pitch and a hall-type reverb. By switching away from the uncluttered 'Zen Mode' your phrases suddenly gain automation curves/graphs that can be modified with freehand mouse sweeps or a cluster of controls that generate sine, saw, square and random curves with adjustable amplitude, frequency and phase.

Amongst the hours of sample content I found no duds, but it's fair to say the range of character is somewhat narrow. Everything is skewed towards sci-fi, horror and fantasy, being mostly electronic, complex and edgy in style. Cinematic yes, but decidedly not for rom-coms or historical dramas! However, it's not all dark, spooky and threatening, and many long-duration atmospheres and drones are usefully generic. 'Shorts' are varied too, and aside from obvious weapon/android power-up/down FX there's enough playback flexibility for these to be a useful source of new textures or percussive hits too.

One thing I missed was a low and high-pass filter per slot, to help dense multi-layer atmospheres sit together better. You could work around this using multiple instances and DAW plug‑ins, of course, but it's not as convenient. Some users may also wish that the fastest automation curve frequency was greater: over the course of a very long sample, parameter changes will occur relatively slowly. In fact I started to wonder if this was an aspect of the playback system that could usefully have a tempo-sync'ed option... However, all samples are accessible from the file system as WAVs and can be brought into your DAW (or a granular synth perhaps) if you want to get ambitious, the only down side being that the WAV names are different, and nothing like as friendly or descriptive, as those seen in the Kontakt chooser.

Those very minor caveats aside, this is yet another very successful and distinctive library from Sonokinetic, which will allows you to cook up all manner of otherworldly noises via serendipitous or more considered explorations of the sample content.