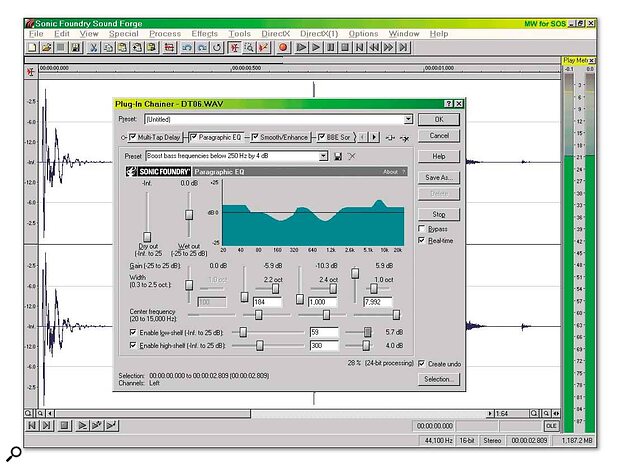 The Plug‑In Chainer, along with the new bundled plug‑ins from the XFX packs such as the Paragraphic EQ shown here, create a powerful combination.

Sound Forge is a very popular PC audio editor, but users have waited a long time for 24‑bit support. Now it's here in version 5, along with a bundle of new features and plug‑ins.

For several years Sound Forge 4.0 was my audio editor of choice: back in 1996 it offered far more functions than most of its competitors, and by Christmas of that year version 4.0a introduced the first plug‑in effects using early DirectX technology. By March 1997 I was reporting on its very effective Noise Reduction, Spectrum Analyser, and Batch Converter plug‑ins. However, it was a further 18 months before the next version, v4.5, of Sound Forge appeared. I covered it in my October 1998 PC Notes column, and although it now included batch conversion and spectrum analysis as standard, along with an extra set of Acid looping tools, very little else was new, and by that time its lack of 24‑bit support was becoming a serious deficiency.

Exactly three years later I'm reviewing Sound Forge 5.0, which finally adds the ability to load, edit, and save 24‑bit files. There are also other new features, some of which have never been seen before, and others that were previously available as optional extras and are now bundled free of charge. 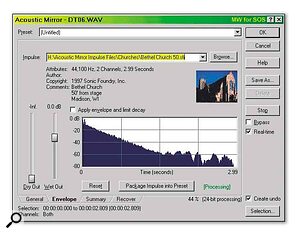 With acoustics derived from real‑world environments, Acoustic Mirror is a powerful reverb plug‑in, although it does take a lot of CPU muscle.

Sonic Foundry have, thankfully, stuck with their simple serial number protection, but I was a little concerned to get an error message during the install process (a DLL file failed to register), although this didn't cause me any subsequent problems. The new desktop and Start menu shortcuts didn't point to the new application either, but this was easily corrected by hand. I did make sure that I had the latest 5.0b build 162 update, available from the Sonic Foundry web site. However, at 20Mb this is the largest file I've ever been required to download, particularly for an update, and even with a good connection it occupied my 56k modem and phone line for over an hour.

Also on the CD‑ROM is Vegas Audio LE, a cut‑down version of SF's multitrack audio recording application providing eight‑track recording, a 50‑page Quick Start Manual and a separate foldout guide to Sound Forge's many keyboard commands, along with a comprehensive PDF manual. Make sure you copy the latter onto your hard drive, as this isn't done by default when you install, and it certainly makes getting to know the new features somewhat easier. 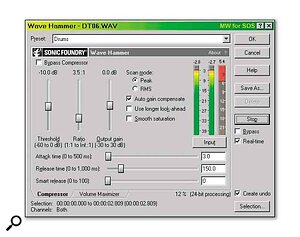 The new Wave Hammer plug‑in is a versatile addition both for mastering and sound mangling.

Sound Forge 5.0 doesn't look a great deal different to its predecessor, but things have changed under the bonnet. It now supports 8‑bit, 16‑bit, 24‑bit integer, and 32‑bit IEEE float formats, at any sample rate you care to enter between 2kHz and 192kHz. The Resample process has also been upgraded to 192kHz capability, while the bit‑depth converter provides a variety of dither and noise‑shaping options to achieve the best possible results when converting from 24‑bit and 32‑bit files down to 16 bits for CD burning. The Statistics function can now finally provide a readout of RMS background noise figures for your 24‑bit soundcard, while for those more interested in on‑line audio or smaller file sizes, a new MP3 plug‑in is now available in the Save As dialogue.

In effect terms, the highlight of version 5.0 is the all‑new Wave Hammer, a two‑part audio mastering plug‑in featuring a 'classic' compressor and a volume maximiser on separate tabbed pages. The compressor features standard Threshold, Ratio, Attack, Release and Output Gain controls, along with an extra Smart Release, which compensates for sustained notes and transients. You can select Peak or RMS detection, along with 'smooth saturation', and automatic gain compensation. The 'Use longer look‑ahead' option lets you get away with slower attack times.

The volume maximiser works like Waves' L1 Ultramaximizer and Steinberg's Loudness Maximizer, by looking ahead in the waveform to anticipate peaks, so that the average level can be increased by several dBs with minimal changes to the subjective sound of the material. Like the L1, it has Threshold, Output Level, and Release Time controls, but as with the compressor there's also an option to use a longer look‑ahead time. Both pages feature peak‑holding meters that can be switched to display input or output levels, as well as another meter displaying the current amount of compression or limiting. This is a versatile and good‑sounding plug‑in, capable of a wide range of treatments from subtle to extreme, and will no doubt find use in many other areas as well as mastering.

The Plug‑In Chainer is a big improvement on its predecessor, and is now modelled on the one already used in Vegas Pro. Much like Wavelab's Master Section, this DirectX plug‑in allows a number of other plug‑ins to be chained together and their combined effect previewed and applied to an audio file. It's actually more versatile then Wavelab's, in that you can chain as many effects as you wish (Wavelab has a maximum of six), as well as delete or reorder them at will.

Three new functions have appeared on the Tools menu under the Repair category. These deal with glitches of various lengths that can first be identified using the Find tool. Interpolate deals with short glitches of less than 2mS, by replacing the selected section with a straight line. For glitches of between 5 and 50mS, the Replace function takes the same length of data from immediately before the selected glitch area, and uses this to replace the affected section, applying crossfades at both ends. Finally, Copy Other Channel performs a similar function that only works with stereo files, by replacing the affected area with data from the other channel.

I particularly liked the Multi‑Tap Delay, which provides up to eight taps each with separate delay time, gain, and pan controls, along with global LFO delay‑time modulation and optional low‑pass filtering. The four‑stage Paragraphic EQ is similarly versatile, providing up to four parametric sections, as well as low and high shelving EQ options, while the Flange/Wah‑Wah provides even more than its title suggests, with a switched selection of phaser effects. Overall, some of the plug‑ins are more effective than others, but they are undoubtedly a comprehensive and valuable addition to the already large list of built‑in treatments.

In some cases they replace older but largely equivalent built‑in effects with no real‑time preview facility which were previously available in Sound Forge 4.x, and Sonic Foundry have located the replacements in the Effects and Process menus so that experienced users will still find equivalent functions in the expected places. I can see the logic in this, but given that they now all show up as DirectX‑format plug‑ins in other applications, I personally found it confusing not finding them all in Sound Forge's DirectX menus, especially as they do appear in the long list of possible options inside the Plug‑In Chainer.

I reviewed Acoustic Mirror (then called Acoustic Modeler) way back in SOS January 1998, and its ability to capture the acoustics of a real environment in an 'impulse' file and use it to model realistic reverbs is still mighty impressive, especially since similar technology has since appeared in some very high‑end 'sampling reverb' units from Sony and Yamaha. It can also model microphones, as well as provide more oddball treatments using standard WAV files instead of impulses to twist your sounds in unexpected ways. Its only failing at the time was a large CPU overhead related to reverb decay time that forced most of the longer impulse files from large halls and stadiums to be applied off‑line. However, with today's faster processors, real‑time operation is far more feasible, and Sonic Foundry have included a host of impulses on the CD‑ROM ranging from bathrooms to concert halls, bridges to pine forests, caves to metal tanks, along with a selection of mics and some standard WAV files that provide some intriguing and sometimes beautiful results. When first released it retailed at £179, and so makes a valuable addition to Sound Forge 5.0.

Sound Forge 5.0 is a long overdue upgrade to an excellent product, and for those still running version 4.5 will be an almost essential purchase at the bargain upgrade price of £92. It now has a huge range of high‑quality bundled plug‑in effects, and its support for 24‑bit files finally removes the only major obstacle to it being taken seriously in 2001. Compared with Wavelab's multi‑tasking windows, which let you change focus from plug‑in windows back to the audio waveform or another menu option, I still find v5.0's 'preview, apply, or close the current window' approach rather restricting, although its enhanced Plug‑In Chainer is more flexible and powerful than Wavelab's Master Section, and its Spectrum Analysis function is far more comprehensive.

Overall, if you want a PC stereo audio editor that can modify files in almost any way you can think of, and probably quite a few more besides, Sound Forge 5.0 should certainly be on your shortlist alongside Steinberg's Wavelab, and possibly Syntrillium's Cool Edit Pro. However, for those who want to create audio CDs, its lack of compatibility with the now‑discontinued CD Architect will be a major blow for existing users, and the addition of basic track‑at‑once CD writing will be of limited use to most musicians, who normally need disc‑at‑once mode to avoid clicks and to ensure compatibility with all CD players. Of course you could do all your mastering and editing in SF 5.0 and then export the final 16‑bit files to another application for CD burning, but this isn't as elegant as the integrated CD burning facilities now available in Wavelab. Both packages are now identically priced at £379, so your final choice may be determined by how much CD burning you do.

There's a new 'Extract Audio from CD' option in Sound Forge 5.0's Tools menu, which lets you rip tracks, a user‑selected range, or entire CDs. There is also a Play option, but strangely this doesn't digitally extract the audio and play it back through your soundcards for optimum quality like most similar applications, but simply starts normal analogue CD playback.

Sadly, the new CD Writing option is very limited, only being capable of writing in track‑at‑once mode and then finalising the CD‑R for playing in a standard audio CD player. After Sonic Foundry's wonderful CD Architect, which provided disc‑at‑once mode for click‑free audio CD creation, as well as loads of other advanced features including drag‑and‑drop track manipulation and automatic crossfades, this is very much a damp squib. Unfortunately, CD Architect is no longer in their product line, and was apparently a victim of cost‑cutting exercises which started about a year ago. Even worse, though CD Architect could be launched from within Sound Forge 4.5, existing users have found to their cost that it won't run in the same way if they upgrade to Sound Forge 5.0. The only solution is to keep your 4.5 version intact to run CD Architect, and install SF 5.0 in a separate folder.

With its long‑awaited 24‑bit support, and an enticing new list of bundled extras, Sound Forge 5.0 should find many admirers. However, its limited CD‑burning facilities and non‑compatibility with the now‑discontinued CD Architect won't endear it to those who do a lot of CD mastering.