Sound Skulptor is the manufacturing arm of Synchronia, a French recording studio in the South West corner of France, near the Pyrenees. The company's product list includes a variety of mic-preamp modules for a bespoke 1U rack system, as well as an analogue tape simulator, and some API 'Lunchbox' 500-series modules. All of these items are available either in self-build kit form for the keen DIY-er, or as ready built and tested modules (at higher cost). 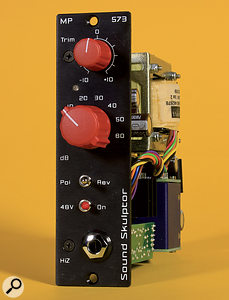 Currently, the Lunchbox range comprises a three-band equaliser and a mic preamp, both derived from the classic Neve console 1073 module. The MP573 preamp is a redesign of the MP73 module from the 1U rack system (reviewed in SOS September 2008) to re-format it for the Lunchbox. The detailed circuit design differs slightly from the MP73, principally with different gain-setting controls and a revised gain structure to permit the use of a single BA283NV amplifier stage at the front end. The MP73 design, like its 1073 inspiration, uses two BA283 amplifiers in series, the first one being bypassed for lower gain settings. In the new MP573 version, the first gain stage does almost all the work itself, with the output BA283AM stage also having higher gain to make up the difference. The total available gain remains at 70dB but this restructuring has affected the test measurements slightly and the MP573 has a fractionally higher THD figure (0.008 percent instead of 0.0035 percent) — although I don't think anyone will notice or mind!

A clever linear power circuit within the module shifts the Lunchbox frame's standard ±16V DC supply to provide the single-sided +24V rail required by the BA283 amplifier stages. Carnhill transformers are used for both the input and output coupling, of course, and the gain stages are both discrete class-A designs using BC184C transistors, with a 2N6488 to drive the output transformer. An internal jumper link allows the input impedance to be switched between 300Ω and 1.2kΩ, the latter being the preferred setting for most applications. A single FET gain stage is used to buffer the DI input socket on the front-panel, presenting a 1MΩ input impedance. The rear-panel mic input is automatically disengaged via a relay when something is plugged into the DI input. A jumper link on the circuit board provides a connection point to insert the optional partnering EQ573 equaliser module into the signal path, if required.

The front-panel controls are completely intuitive, and comprise a coarse gain switch spanning 10-60 dB in 10dB steps, with a continuous ±10dB trim control. Together these afford a gain range of zero to +70dB. There's also an output polarity-reversal toggle switch, and phantom power is switched with a red toggle. A bi-colour LED is driven from a metering circuit which monitors the outputs of both gain stages, and illuminates green for normal signal levels and red when the signal nears clipping (+27dBu at the output). The maximum input level is nominally +20dBu at 1kHz, but normal input transformer saturation reduces the headroom for lower frequencies, such that the maximum input at 50Hz is a reasonable +17dBu, while it's only +3dBu at 20Hz. The bandwidth remains within ±1dB between 10Hz and over 40kHz, even at maximum gain.

The MP573 has all the classic vintage character you'd expect, Carnhill iron and discrete class-A amplification bestowing a fulsome bottom end and silky-smooth top, with that slightly 'larger than life' aspect that marks a good preamp. It's not as fast on transients or as tonally neutral as many modern preamps, of course, but the sound is detailed and airy and, above all, extremely musical and pleasant.

As a ready-built Lunchbox module, the MP573 is an attractive buy at around half the price of the modern Neve 1073LB Lunchbox 1073 variant (reviewed in December 2011), but as a DIY kit, the saving of a further €200 makes this a real bargain. Construction is very straightforward for anyone with reasonable electronics experience, and the documentation is extremely comprehensive and very easy to follow. The chassis metalwork, printed circuit boards and individual components are all very good quality, and the end result is a totally professional looking and sounding product. I remain very impressed with Sound Skulptor's products, and, if you're thinking of expanding your Lunchbox system, I recommend a closer look at the MP573 and EQ573 modules. If you're not wedded to a Lunchbox frame, look at the MP73 module, which is a priced slightly lower — although you will also need to budget for the matching frame and power supply, of course.  Hugh Robjohns

Thanks to KMR Audio for the use of an API Lunchbox rack during this review.