Recently risen from the ashes of the defunct Tonehammer company, Soundiron unleashed their 14.2GB Apocalypse Percussion Ensemble. Building on the concept of Tonehammer's Epic Tom and Epic Dhol Ensembles (reviewed in SOS March 2010, see /sos/mar10/articles/tonehammerpercussion.htm), APE is a much larger, 16,700-sample collection of assorted drums, toms, cymbals and extras, played in ensemble and solo form. All instruments were recorded in a large concert hall from close and distant mic positions, and some also offer a third, 'middle' miking. 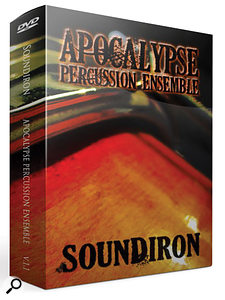 The library is designed for (you guessed it) cinematic productions, and the samples certainly scream "Action!” at you: the familiar racket of big, battering, explosively ambient drums, if not the ideal underscore for a romantic sub-plot, is tailor-made for blockbuster battle scenes. Load the Toms Ensemble patch and follow Soundiron's tip of slamming your forearm down on the keyboard, and you'll hear the brutal effect of eight or nine simultaneous multiple-tom hits producing impacts of pulverising force.

Utilising a technique the makers describe as "a bit like team juggling, except with more wood splinters, crushed fingers and blood”, six snare drums were played separately and in four-player ensembles. I loved the precise, crisp yet reverberant tone of some of these solo snares. Sounding more like rock kicks than orchestral gran casa, APE's bass drums are suitably thunderous, and the large cymbal menu (including rock crashes, splashes and China cymbals of various sizes) ranges from delicate ride-cymbal 'tings' to the raucous din of several crash cymbals struck simultaneously.

Though APE has the sonic grandeur of an orchestral library, it lacks traditional items like timpani, piatti hand cymbals, gongs and tuned percussion, and its ethnic selection is fairly slender. There are no taikos, but booming dhol and clattering dumbek ensembles (the latter featuring some nice shell hits) add a somewhat exotic flavour. I also enjoyed the festive jingle of the Middle Eastern riq tambourine ensemble, and the low-tech, DIY thump of the African cajon box drum.

Extra bells and whistles abound: beautifully atmospheric soundscapes, pads and ambient drones span the emotional spectrum from scary to radiant, while a built-in 'Uberpeggiator' is handy for creating on-the-fly rhythm patterns with one keystroke. The 12-slot 'Mega Mixer' is a cool innovation, allowing you to easily construct your own multi-instrument setup with custom mappings and layerings within a single Kontakt instrument. One quibble: the doggedly asymmetrical mapping of the 'Mics Free' instruments is counter-intuitive, but the layered 'Mix' patches (which supply an individual volume control for each mic position) more than compensate.

With the exception of some excellent snare rolls and dramatic cymbal mallet swells, performances are restricted to single hits and flams. Nevertheless, the sheer quantity of highly usable, immensely powerful hits make this collection good bang for the buck — 'bang' being the operative word! Dave Stewart