Source Audio are probably best known for their unique Hot Hand controller, a wireless ring worn on the finger that provides motion control over a range of effects. Their latest pedal, the Programmable EQ, might be much more conventional in comparison, but it still offers something we've never encountered in a compact stomp box before: digital graphic EQ with four user-definable presets that you can either recall on the fly for tone-shaping purposes or cycle through continuously for more inventive effects. 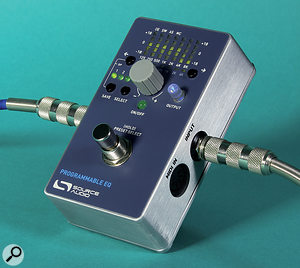 Adopting the conventional compact guitar-pedal format, the Programmable EQ can be powered by a 9V battery or a 9V DC mains adaptor and features mono input and output quarter-inch jack sockets, plus a MIDI input. The last allows you to remotely adjust output volume, select from the four presets and bypass the effect.

The pedal offers ±18dB adjustment over seven frequency bands, ranging from 125Hz to 8kHz. An eighth band, way down at 62Hz, can be engaged for handling bass guitar or anything else with a lot of low end. Adjusting the EQ is slightly cumbersome and involves selecting the band you want using left/right buttons, before tweaking with the central rotary encoder knob. This is a long way from the instant, grabbable appeal of a traditional analogue graphic EQ, where applying a treble cut or a 'smile' curve to a row of faders is the work of seconds.

The big payback, of course, is that four different settings can be saved and then recalled, either by pressing the small 'select' button to cycle through the four presets, via MIDI or by holding down the true-bypass footswitch. This will cycle through the presets whether the effect is on or bypassed. Delve a little deeper into the settings and you'll find it's possible to adjust the scroll speed, and even to set the pedal to keep cycling through the four presets when you take your foot off the switch. This opens up the possibility of some unusual step filter and tremolo sounds, depending on how you EQ the four presets.

Another neat feature is the output level knob, which is backlit with a blue LED that gets brighter as you turn the control up. Sensibly, the output level setting is stored alongside the EQ settings for each preset, so you can compensate for an increase or decrease in level overall. Up to 12dB of clean boost is available, on top of the boost/cut applied to each of the EQ bands.

In the EQ itself, gain adjustment is in increments of 1dB, giving you 36 steps between -18 and +18 dB. That allows a good amount of precision when setting the EQ, something that the small five-segment display for each band struggles to show in any real detail. While these green LEDs are nice and bright, they only give a general idea of the shape of the EQ, and you're better off using your ears rather than your eyes when making adjustments — which, incidentally, is some of the best advice on using EQ anyway!

An EQ pedal is far from the first thing on every guitarist's shopping list, but having a good equaliser in your signal chain can be a godsend, whether for small tweaks to the treble and mid-range, squeezing the best out of a particular guitar and amp combination, or more overt adjustment in tandem with other effects. EQ placed just before or after fuzz and distortion is the secret weapon of many a pro player's signature tone, while EQ'ing delay and modulation effects within an effects loop can pay creative dividends.

In all these scenarios, the Programmable EQ performs admirably. As with many compact digital guitar pedals, a very slight increase in background noise is detectable — and you'd be more likely to describe its sound as 'accurate' and 'precise' than 'warm' or 'smooth' — but, given the pedal's modest retail price, its audio performance is more than up to scratch.

Looking at the competition, this pedal is not as quick and easy to set as the fader-equipped Boss GE7 Equaliser, while the more costly Empress ParaEQ will offer greater sound quality (plus, being a parametric, features such as adjustable Q). However, the clue to the Programmable EQ's real selling point is in its name. The ability to recall four different EQ settings means that, in a live context, this pedal opens up possibilities that no other EQ stomp box can. David Greeves