These three-way, sealed-box speakers aren't cheap — but then they might just be the best monitors in the world...

While the vast majority of consumer and professional loudspeakers are 'ported' or 'vented-cabinet' designs, there has, in recent years, been a noticeable resurgence in sealed-cabinet monitors. Naturally, there are pros and cons to all cabinet types but, put very simply, a ported cabinet produces bass very efficiently down to a defined frequency, with little usable output below that point. More critically, the time-domain response usually (although not always) involves some low-frequency 'ringing' or resonance, which smears and extends low-frequency signals. This characteristic can make bass drums sound huge and powerful, which might be great for a casual domestic listener, but it's not very helpful if you're trying to fine-tune the mic position, mix balance, EQ or dynamic processing of bass instruments!

In contrast, a sealed cabinet is relatively inefficient at reproducing low frequencies, and a pretty large cabinet is needed to match the performance of a typical modestly sized ported design. This alone explains why sealed-cabinet monitors are relatively rare today. However, the sealed-cabinet approach has the advantage of a very precise time-domain response and a far more gentle LF roll-off, which means that the usable output extends to a much lower frequency. Together, these attributes allow the true quality, timbre and timing of low-frequency instruments to be determined more easily and accurately, and that means arriving more quickly and easily at a better end result.

The BBC's LS3/5A, the Yamaha NS10, and the Auratone — all classic sealed-cabinet designs — are renowned and revered as 'reference' monitors, whose bandwidth limitations (and response unpleasantness, in the case of the NS10!) were largely disregarded, purely because their inherent time-domain benefits made these speakers very useful mix tools. They are all able to provide information that is difficult or impossible to extract from conventional ported designs — especially those that were around at the time, in the 1970s and '80s. However, speaker drive-unit and amplifier efficiency has improved significantly in the last decade and, as a result, the practicality of sealed-cabinet designs has improved markedly. Today, for example, all of Blue Sky's monitoring systems are sealed-cabinet designs, and the Acoustic Energy AE22 is proving to be an extremely popular purchase for home studios because it delivers a remarkably accurate sound at a very affordable price (see the SOS review at /sos/may08/articles/acousticenergyae22.htm).

Of course, the AE22 is a fairly small two-way speaker, and the -3dB point for its LF extension is a high-sounding 100Hz (although the perceived bass response is considerably better than this figure implies, because of its very gentle roll-off). However, think what could be done with a bigger budget and much larger cabinet — and that's exactly what Steve Phillips, who was head of the AE22 design team, has done. The result is the SP Acoustics SP1M three-way monitor.

SP Acoustics speakers are handmade in the UK near Stroud in Gloucestershire — not far from the ATC, AVI and Acoustic Energy monitor-speaker factories, in fact! The SP designs use the best components available and locally sourced materials wherever possible, and they are definitely designed up to a quality level, rather than down to a price point.

Designing a high-quality monitor speaker is a very challenging task, with lots of interacting parameters and complexities. For example, achieving a well-extended and powerful low-frequency response in a sealed cabinet requires a large internal volume — 120 litres, in this case — and that means a very big box. Easy enough, you'd think, but large cabinet side panels will tend to vibrate and resonate, introducing coloration and distortion into the sound. There are ways of overcoming that, of course, but they add more complexity and cost again. In the case of the SP1, the solution is a combination of extensive internal bracing combined with a clever ceramic-MDF laminate arrangement to ensure that the cabinet as a whole remains acoustically inert.

Since the sealed-cabinet arrangement has relatively low efficiency, the drive units need to be more efficient and powerful than those employed in equivalent ported-cabinet designs, which again adds to the cost. The SP1M uses long-throw bass and mid-range drive units with 'under-hung' voice coils. The latter describes a construction technique in which the voice-coil itself is considerably narrower than the height of the magnetic gap. The narrow coil has a relatively low mass, so can move and change direction quickly, and is always moving within a constant magnetic flux, which means very low harmonic distortion. It is a more expensive and less efficient design approach compared to the more usual 'over-hung' arrangement, but the benefits make it worthwhile in a high-end monitor like the SP1M.

The SP1M uses two small 6.5-inch bass drivers rather than a single large-diameter bass unit, because they deliver a better dynamic response. These drivers employ hardened aluminium cones to maintain an accurate pistonic action (ie. pushing the air back and forth in a very linear way), and also to act as heat sinks for the voice coil, to minimise thermal compression. The four-inch mid-range driver employs a paper-pulp cone, while the tweeter is a 0.75-inch fabric dome. 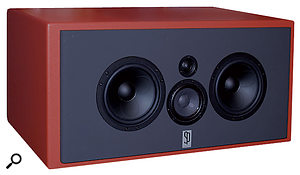 The SP1s are available in portrait and landscape formats. The landscape orientation has a slightly smaller internal cabinet volume, and an accordingly reduced low-frequency extension.I have already mentioned the fact that sealed-cabinet designs need to be large, but how large, exactly? Well, the SP1M is available in both portrait (vertical) and landscape (horizontal) formats, and in both active and passive configurations. The portrait versions (the passive SP1M and the active SP1MA) measure 1060 x 350 x 460mm (HxWxD), while the horizontal versions (SP1ML and SP1MLA) measure 350 x 720 x 460mm (HxWxD). So these are big beasts, but not significantly larger than other full-range, three-way designs such as PMC's IB1 and IB2, or the Blue Sky Big Blue (reviewed SOS November 2007). The portrait model places all four drivers in a vertical line, whereas the lansdscape version has the tweeter mounted centrally above the mid-range driver, with a woofer placed on either side.

Depending on the cabinet orientation and active or passive electronics, the SP1Ms weigh between 38kg and 57kg, with the active portrait version being the heaviest and the passive landscape version the lightest. Interestingly, the portrait cabinet has an internal volume of 120 litres, whereas the landscape version encloses 100 litres, with a corresponding reduction in LF extension as a result, bottoming out at 40Hz instead of 35Hz (-3dB). The specifications also claim that the HF response extends to 35kHz (-3dB again). Apparently, the vertical cabinet incorporates a 25-litre chamber, which is mostly filled with damping material. When the horizontal version was developed, it was found that an eight-litre chamber was quite sufficient, so most of the volume reduction comes from there.

The passive versions of the SP1M employ gentle second-order (12dB/octave) crossover slopes with remarkably few components — only four capacitors and four inductors, in fact. Their construction involves solid-copper bus-bars, rather than flimsy PCB tracks. The recommended power-amplifier rating is up to around 500W, which also happens to be what is built into the active versions. Connection to the passive SP1M is made via a four-pole Speakon socket. The active speakers have balanced XLR inputs, and include three separate Class-A/B amplifiers delivering 300W for the two bass drivers, with 100W each for the mid-range driver and tweeter. The active crossover is actually performed digitally at 24-bit/96kHz, with eighth-order slopes (48dB/octave). Although access to the DSP software is not made available to the end user, the crossover parameters can be adjusted by SP Acoustics (or their agents) to optimise the in-room performance when the speaker system is installed — and that room-alignment service is included as part of the purchase package.

I auditioned both active SP1 variants — the portrait and the landscape — in two different but acoustically well-treated control rooms. Test measurements in one of the rooms revealed a response within ±3dB between 18Hz and 18kHz, and only 5dB down between 10Hz and 20kHz. Needless to say, that's a phenomenally good response in real-world conditions, and demonstrates the calibre of the SP1 far better than flowery descriptions!

Before considering the sound of the SP1M, the first thing that is immediately apparent is the colour. The cabinets are a slightly textured pastel red — none of the shy, retiring painted black, or rich polished oak veneers of the competition here! However, whereas the colour scheme might grab the attention, the sound, like that of all accurate high-end monitors, is initially quite underwhelming. These monitors don't shout at you, they don't throw detail in your face, they don't try to rearrange your internal organs just for the fun of it and, almost regardless of how much you turn them up, they just don't sound loud! The less experienced might think these to be bad and un-monitor-like properties, but nothing could be further from the truth.

The 'not sounding loud' characteristic is actually a very good indicator of an ultra-low-distortion speaker, because we are conditioned to associate 'loud' with 'distorted', and it's only when you try to have a conversation with music playing that you realise just how loud the SP1s can go without any signs of effort at all! As I started listening critically to a wide variety of material, including classical, rock, light pop and jazz, the subtlest of details were so startlingly obvious that listening almost became a passive activity requiring little effort. The experience was akin to comparing a standard-resolution TV screen with an HD one; the information is all there and easy to discern, without distortions or artifacts to get in the way. Many 'monitors' deliberately over-emphasise the mid-range detail to make it audible above the veiling that comes with LF harmonic distortion, but the SP1Ms leave the material alone and simply remove the veiling — which is the way it should be, of course! In fact, the SP1M is one of the most transparent and neutral speakers I've ever heard.

Kick drums and bass guitars are revealed as distinctly separate entities with their own space, dimensions and dynamic characters. The sense of timing and rhythm is very precise, musical dynamics are vast and natural, and stereo imaging is extremely stable and detailed, with a wide 'sweet spot' and a very realistic sense of depth and spaciousness on appropriate material. I was expecting the stereo imaging to suffer with the landscape configuration but, surprisingly, I didn't find that to be the case during my auditioning.

I am a staunch supporter of full-range monitoring in an appropriately treated listening space, and the transparency of the low end that is characteristic of the sealed-cabinet approach is hugely beneficial when mixing and mastering. The SP1M monitors exhibit these benefits about as flawlessly as it is possible to achieve, and while the price might create panic in your bank manager and threaten the EU's austerity programme, the results more than justify the costs. These speakers are simply stunning, and must be heard to be believed! If the world ends in December, I will go happily, having heard the SP1M.

The passive SP1Ms compare price-wise with the passive PMC MB2S-P, and that would be an interesting audition indeed. The active ATC SCM50A SL Pro would also be a contender. The active SP1s sit in the middle of some brilliant contenders like the Geithain RL901K, the ATC SCM 100SL and 150 SL Pros, and PMCs new IB2S-AP, with the Adam S5X being only a £100 more in the UK. Again, choosing between them would be difficult, but as the only sealed-cabinet design in the party the SP1M has some unique strengths and no obvious weaknesses.

Large, sealed-cabinet, high-end monitor speakers in which ultimate quality, transparency and accuracy were the only