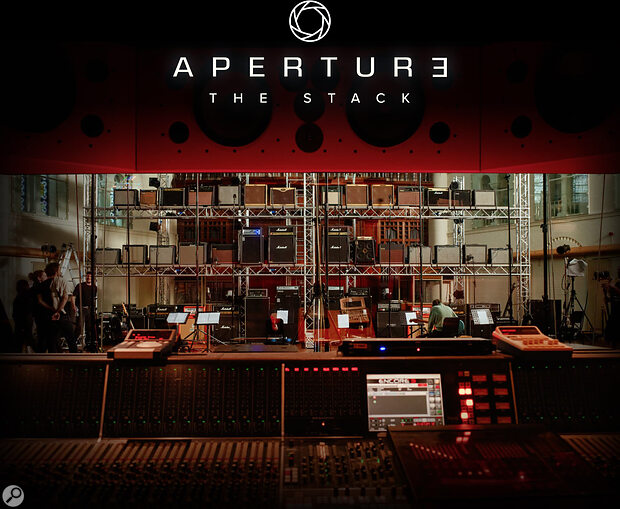 The publicity photo is attention‑grabbing: 56 guitar amps lined up on a towering metal gantry inside AIR Studios Lyndhurst Hall. What is it, a trade show? Or the World’s Loudest Guitarist contest? On closer inspection, it turns out this is the recording setup for Spitfire Audio’s new sample library. Those guys normally go into AIR to record sensible orchestral projects, but on this occasion someone has clearly taken leave of their senses.

The sound sources used for the project are unique and, in some cases, bizarre. There’s Christian Henson’s not inexpensive Colossus mega‑synth, which its owner has christened Dave (works for me); Henson’s modular rig (aka The Wall); eight Lyra‑8 and two Deckard’s Dream MkII analogue synths; four electric guitars; two bass guitars; two Juno 6s; two Sequential Prophets and a Roland TR‑808 drum machine. All were fed in turn into this mountain of amps, creating a multi‑faceted wall of sound and exciting the hall’s majestic reverb.

One thing The Stack does extremely well is big synth drones; played through the multitude of speakers, the Colossus’ low bass octaves take on a massive multi‑dimensional quality and seem to swim around you. The mad Lyra‑8 synths generate a frightening amount of sub‑bass, while The Wall’s big, buzzy, Godzilla‑strength bass lines and Braam‑like pitch bends are an exercise in extreme noise terror. The modular rig also turns in some epic pads which sound variously like a cathedral organ on steroids, the world’s biggest super‑saw patch and a hybrid orchestra playing somewhere out beyond Alpha Centauri.

Christian Henson’s self‑professed ridiculous idea could have been a disaster, but instead has yielded excellent results from unexpected quarters.

The library also has a tender side. Alongside the Jurassic Park‑like bass roars are soft portentous pulses, solemn, hushed synth sonorities and serene, floaty quasi‑orchestral pads, all bathed in an extraordinary ambience. While these quieter samples feature a single row of 14 fairly close‑miked amps, pushing up the mod wheel introduces more amp rows, a more distant miking and lashings of hall reverb — hence, the ‘aperture’ concept of a tight enclosed sound opening up into a large, expansive ensemble.

I had assumed the guitars would reach gargantuan levels of Djent overdrive, but they actually sound fairly tame and controlled in the main. However, the players compensate with some magical muted twinkling and twangling, gentle swarm‑like strumming and quiet sustains reminiscent of stroked wine glasses. I also enjoyed the glitchy drum kits supplied by Afro Rack, but don’t feel a TR‑808 gains much from the addition of a large hall reverb!

Aperture: The Stack runs on the Spitfire Audio app and is 6.5GB installed. The library has no manual, and in a rare departure for Spitfire, no microphone balance mixer. A triumph of concept over common sense, a high‑risk experiment and a glorious photo opportunity, Christian Henson’s self‑professed ridiculous idea could have been a disaster, but instead has yielded excellent results from unexpected quarters.