Not many people know this, but ‘Euphone’ is the generic name for an 18th-century instrument consisting of resonant glass rods, played by stroking the glass with wet fingers. The concept was refined in the 1950s by the Baschet brothers, whose Cristal Baschet has to be seen to be believed. Manufacturing of this wonderful ‘musical sculpture’ having now ceased, Spitfire Audio’s Christian Henson commissioned a new instrument of similar design from a French maker, the unique twist being that its tuning blocks and tines are made of Titanium to ensure longevity. 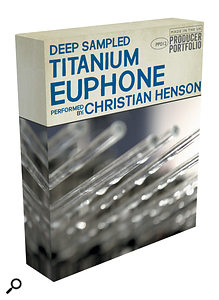 The classic Euphone/Baschet sound resembles a soft, spacey and ethereal pipe organ, though with a richer, more mobile and organic tone. Its upper register’s flutey, treble voice-like quality is reminiscent of a Theremin (but without the pitch glides), while lower pitches have more of a ‘blown bottle’ flavour. Playing louder introduces extra overtones, giving bass notes a more complex and strident character in the same sonic ballpark as a didgeridoo or Indian tambura.

Long notes were sampled at three dynamics with the Euphone’s flexible resonance sheet in ‘open’ and ‘closed’ positions, resulting in two subtly different timbres. In order to simulate the fantastic natural modulation which occurs when this sheet is wobbled up and down, Spitfire use an LFO to crossfade between the two sample sets, producing a luscious chorused effect. There’s also a third, more mellow-sounding patch recorded with the distinctive flared amplifier cones placed in front of the instrument. This being a purely acoustic and rather unpredictable sound source, no two notes sound exactly the same, so if you’re bothered by the occasional squeak or imperfection (Spitfire take a relaxed view of such things), you can simply switch patches!

The samples were recorded in stereo at Air Edel’s studio through an array of posh microphones, all presented on the GUI along with a deliberately distorted spot mic recorded through a Culture Vulture box. An optional vintage EMT plate adds period charm, but on the review copy some plate samples were unintentionally distorted (this is due to be rectified in a v1.1 upgrade).

For this library Spitfire have created an advanced GUI which allows you to customise the mapping of the effects and hits. If you’re happy to stick to the factory layouts, you can use the more familiar ‘Classic GUI’ patches instead. However, the custom mapping option makes it easier to navigate the numerous effects’ round-robin variants. Dave Stewart