Hollywood’s Sunset Sound studios celebrated their 50th anniversary with this incarnation of their legendary mic preamp.

With a history that spans over half a century, Sunset Sound remains one of the most legendary recording venues in the world. Countless musicians playing in various musical genres have crafted their productions in this parallel universe on Sunset Boulevard. The studio has always been particularly famous, though, for the many rock records that have taken shape there. The Doors, Led Zeppelin, the Rolling Stones, Van Halen and many more of the most famous names in rock music have made records here which defined not only their careers, but also the sonic spectrum of the genre itself. 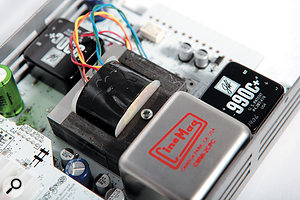 The S1P is based on two John Hardy 990c op amps and custom-wound Cinemag nickel input and output transformers.For many decades, the control rooms of Sunset Sound studios 1 and 3 have been home to custom API/DeMedio recording consoles. These are unique-sounding mixers which were built with API 550a EQs in each channel, at a time before API themselves became a console manufacturer. The input section and the summing stages of the Sunset Sound consoles, however, were custom designed, and that design has never been available to the outside world — or rather, not yet. Because, designed by API legend Paul Wolff, named in honour of the late Sunset Sound founder Salvatore ‘Tutti’ Camarata, and brought to market as a celebration of the studio’s 50th anniversary, the S1P Tutti microphone preamplifier makes the input section of the Sunset Sound desks available to anyone with a 500-series chassis/power supply. According to the makers, the new preamp module sounds so close to the original that both can be mixed for use with a pair of overhead mics without any sonic difference at all. I’m sure you can imagine how keen I was to have a closer look at and listen to this classic piece of rock history.

The architecture of the S1P is typical for a late-’60s console preamp design. Based on two discrete, potted John Hardy 990c op amps, which have a reputation as a cleaner-sounding alternative to API’s own 2520, the Sunset Sound preamp delivers up to 66dB of gain for microphone signals. The face plate boasts a six-position rotary switch for preamp gain, which offers 10dB increments between 10 and 60 dB. In addition, the preamp may be fine-tuned with the trim potentiometer over a range of ±6dB. In my view, such a layout is probably the best and most intuitive compromise for preamp controls, as it allows one to set a coarse sweet spot, and then to ride the gain more precisely over a reasonably narrow range; 12dB over the entire range of a potentiometer allows for fine control without any risk of ruining a take because of unwanted sudden gain changes. In addition, there’s an output potentiometer, which plays the same role as the channel fader on the console. This way, the preamp input may be driven hard for effect, but without overloading the next device in the signal chain. It’s a feature which screams ‘pleasant distortion’ and should appeal to anyone familiar with the typical discrete class-A devices from the era of the original. 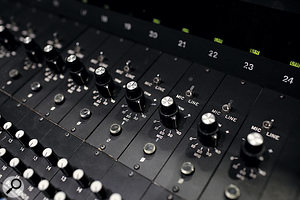 The original Sunset Sound mic pre in the console of Studio 1.Following a pretty familiar pattern, the Tutti preamp offers phantom power and polarity inversion via backlit switches. Another switch toggles the combined XLR/TRS input on the front panel between microphone and high-impedance instrument signals. There’s also a two-colour signal/overload LED, but there’s neither an input pad nor a high-pass filter.

The funky orange flower-power look of the module may not be to everyone’s taste (especially to those hoping for the rather serious-looking black preamp section of the original console!). However, the hardware configuration and the components employed are of the highest calibre. Following modern production techniques, the S1P has been built with SMDs (surface-mount devices) on its circuit boards, but it also boasts the two discrete 990c op amps that I’ve already mentioned, as well as the nickel input and output transformers, which have been manufactured by Cinemag — who can be viewed as a descendant of the original supplier, Reichenbach — to the exact specifications of the vintage devices. The enclosure offers sufficient ventilation and a very sturdy design, so I’m not going out on a limb when I predict that the module should promise years and years of reliable operation.

A straightforward 500-series preamp normally doesn’t need much functional explanation before it can be put to use, and the S1P is no exception. Once installed in a ‘Lunchbox’ frame of your choice, little preparation is needed — except plugging in a microphone, of course. Although the module doesn’t offer exceptional metering facilities, the simple two-colour LED does a good enough job. Is a signal present at the input? Is the unit in danger of clipping? Those questions may be answered at first glance, and in most cases this is all we really need to capture a take with healthy signal levels. It’s a good idea to monitor the preamp level directly at the A-D converter to avoid nasty digital overs, and, due to the nature of such a discrete class-A design, the Tutti preamp reacts in a well-tempered manner on occasional signal peaks. In other words, it accepts a lot of level on its input before it breaks up in an audible, let alone unpleasant, way.

When supplied with more conservative input levels, the Sunset Sound preamp offers a bold, strong signal with a vivid, beautifully contoured mid-range. In comparison with some contemporary, ultra-clean, ‘hi-fi’ designs, the Tutti presents the signal in a slightly narrower frame. I’d still describe the sound as fairly well balanced, yet there’s a definite focus placed on the mid-range frequencies. 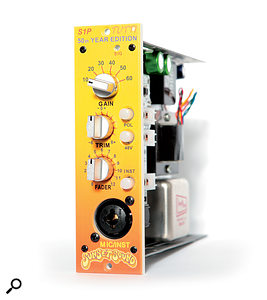 There are preamps on the market with a more solid low end and a more open-sounding air band, and these have their uses, yet the strong mid-range of the S1P helps signals to cut through dense mixes — it’s a quality that can be very important when a lead vocal needs to be ‘pushed through’ a wall of guitars, for example. So I don’t view this slightly ‘boxy’ character of the Tutti preamp as a reason for criticism at all; it’s just useful to be aware of this character, as it may or may not be helpful and desirable, depending on the situation. The S1P may not be the most detailed-sounding preamp available, but it delivers a powerful and up-front signal, and it still reacts quite sensitively to the character of the microphone that’s connected.

When driven hard, the preamp’s attitude becomes even more noticeable. The tone is more tightly focused on the mid-range, especially the lower-mid frequencies, and, depending on how hard one is ‘pushing’ things, a more or less noticeable ‘sizzle’ comes through in the higher mids, especially on any signal peaks that are clipping. This brings another flavour to the table, and with the signal compression that’s an inevitable by-product of overdriving the class-A circuitry, the signal becomes even more dense, and it sits even better in a busy rock mix.

In case my words leave you in any doubt, I created a couple of audio examples to demonstrate the sonic attributes of this preamp. You can find them on the SOS web site: http://sosm.ag/sunset-sound-s1p-media.

With the S1P Tutti preamp, Sunset Sound are offering a recreation of a truly legendary piece of rock & roll recording history, and in a compact and relatively affordable package. The preamp offers all the typical attributes of a discrete design from this era, yet with its own distinct sonic signature. Focusing on a strong, vivid mid-range, the Tutti isn’t going to be the perfect choice for all recording applications — but when it fits, it fits extremely well.

The S1P boasts its own distinct sonic flavour, yet there are a few other preamps in either the 19-inch rackmount or 500-series formats that deliver similar results. API’s 512c comes to mind immediately, and so does their 3124+. BAE offer their own take on the classic API 312A design, and Warm Audio present a more affordable alternative with their WA12 and WA12 500 preamps.

A true rock & roll preamp, the S1P offers plenty of gain and a powerful signal, focusing on a strong, vivid mid-range. Based on quality components and a sturdy design, the Tutti is a serious contender for signals that have to cut through a dense production. However, it may not be the most versatile option on the market.