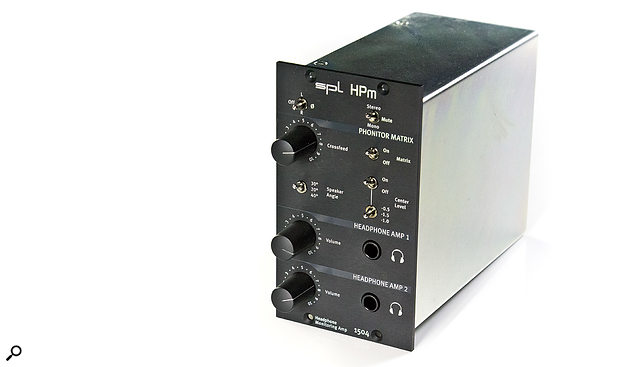 There are countless 500-series mic preamps, equalisers, dynamics processors, reverbs, and even delays, bitcrushers and A-D converters on offer, but I can’t recall seeing any headphone amplifier 500-series modules before now (although one or two larger racks have a built-in monitoring system).

I can foresee situations where having a headphone module in the rack makes a lot of sense, and SPL have addressed this potential requirement with their new HPm. This double-width, dual-output headphone amp is based closely on the company’s well-established Phonitor range of products, and it includes the comprehensive cross-feed matrix facilities that are such a big part of the other models in the range.

As a stereo headphone amp the HPm obviously requires two audio inputs, which is why it has to be a double-width module. The input signals are passed straight back to the rear-panel outputs, though, so that the monitoring signal can also be routed on to a loudspeaker monitor controller, if required.

Physically, the whole unit is shrouded within a steel screening case, while, internally, conventional through-hole electronics are mounted on two high-quality circuit boards. All the ICs are socketed with well-proven and reliable industry-standard devices including a pair of NE5534s and four TLO72s, which appear to handle the I/O and cross-feed matrix functions, while four TLO71s supplemented with discrete push-pull pairs of transistors (BC546/BC556) drive the headphone outputs. The manual contains explicit warnings about not plugging in mono (TS) jack plugs, as the resulting right-channel short-circuit could damage the amplifier circuitry.

Looking at the published specifications, SPL state that the unit draws a total (across two rack channels) of 260mA from the rack power supply, and the maximum input level is +21dBu, with an A-weighted noise figure of -92.3dBu and THD (total harmonic distortion) of 0.0024 percent (driving 600Ω headphones at 0dBu).

The front panel is classic SPL, painted black with grey strips to identify each control section and clear white lettering. The two headphone output sockets are sensibly located at the bottom of the unit, each with an individual volume control. At the very top of the unit are a couple of toggle switches, with one selecting mono or stereo listening modes, or mute, while the second flips the polarity of the left or right channel. Sensibly, this polarity flip comes before the mono sum, so it’s possible to audition the stereo-difference (Sides) signal, if required, which is a very handy facility and one rarely found on headphone amps.

Between the input conditioning switches and the output volume controls are four more toggles and a rotary knob, and these are all devoted to the elaborate cross-feed matrix. First is an on/off toggle switch that activates/disables the whole cross-feed system when required. The rotary knob adjusts the amount of signal that is bled into the opposite channel, essentially controlling the inter-aural level difference that would be perceived when listening to speakers in a room (representing the effects of room size, the strength of reflections, and the size of the head). There’s also some high-frequency filtering involved, and the greater the cross-feed level the narrower the stereo image appears to be in the headphones.

Next is a toggle switch to adjust the nominal angle of the speakers, with options for 20, 30 and 40 degrees. This essentially adjusts the inter-aural time difference. And, finally, a pair of toggles adjust the level of central sounds with the first turning this function on, and the second attenuating the centre level by 0.5, 1.0, or 1.5 dB. The reason for this facility is that as the stereo image is narrowed, central sounds can appear to become too dominant. Compensating for that effect here negates any tendency to mix central sounds too low for speaker listeners!

I bolted the HPm into a standard API Lunchbox rack, and used it to drive various headphones including Sennheiser HD650s, AKG K702s and Sony MDR7509s — with impedances ranging from 300Ω down to 24Ω. There was more than enough volume for them all, with a very clean and transparent signal, plenty of drive for the low end, and this was complemented with an open and airy top end.

Although several manufacturers include variations on the cross-feed idea, SPL’s implementation takes the concept further than most and offers rather more customisation — the latter making all the difference for me. I’ve been quite underwhelmed with other cross-feed systems, but I could fine-tune SPL’s version to deliver a genuinely useful representation of loudspeaker listening that really works for my ears!

At around £450 in the UK$600 in the US the SPL HPm isn’t a cheap headphone amplifier, but it is a very well designed one with genuinely useful features and facilities, and excellent sound quality. Moreover, it represents a very welcome addition to the 500-series module system.