There are two approaches to amplifying harmonica for live performance: one uses a clean PA system simply to make the natural sound of the instrument louder; the other uses the distortion and frequency limitations of an overdriven tube guitar amp to make the sound harmonically richer and more powerful. The latter probably came about in the same way as the distorted electric guitar, arising simply out of the limitations of low-powered early tube-amp designs when pushed beyond their expected operating parameters. But whilst guitars, with their (generally) solid bodies and magnetic pickups, can enjoy all the side-effects of overdriven tube circuitry as benefits, the microphone-wielding harmonica player is always having to balance the tonal enhancements of distortion and compression against the increased risk of feedback. 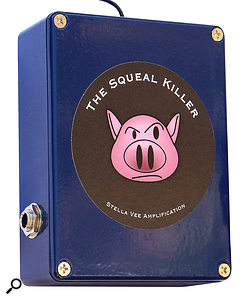 There are some specialised ‘blues harp’ amp designs, but most players’ live setup still tends to be a high-impedance Astatic or Shure ‘bullet mic’, feeding into a tube guitar combo — typically one of the Fender models closely associated with classic blues harp sounds. However, this is a setup with a few inherent problems: the response and directionality of the mic, the inherent mismatch between the mic and the amplifier and the peaky frequency response of the amp and speaker all conspire to make the early onset of acoustic feedback a near certainty.

The Squeal Killer, from Stella Vee Amplification, is a pedal-sized box designed to sit between a harp mic and a tube amp, with the sole aim of reducing feedback. The all-analogue circuitry includes a single 12AT7 tube, and can be powered from an external 9V DC (300mA) source, or, like our test model, a hard-wired 6V DC external PSU. Refreshingly, there are no controls to adjust: it just does what it does, and it does so rather effectively, too.

The first thing you notice on patching it in is the significant degree of insertion loss (we measured 17dB). This is actually part of what makes it work, preventing the output from a high-impedance mic from overdriving the input of a typical guitar amp. Of course, that also makes the output a lot quieter, and it is no surprise that the manufacturer recommends use with higher-powered amplifiers, such as a 40W Fender Bassman or equivalent, to ensure that there is enough amplification to achieve the required performance level. My ‘60s Fender Deluxe, which was initially ‘feedback-limited’ to about 3 on the volume control, needed to be set to 8 in order to achieve the same measured SPL with the Squeal Killer in circuit. The big difference, however, was that there was now no hint of feedback. Importantly, there was also no subjectively discernible difference in the sound — we actually measured a significant HF roll-off (-3dB at 5kHz) in the SK, but that’s never going to be audible through a guitar speaker.

Blues harp players using guitar amps have long been in the habit of subbing the usual first stage 12AX7 for a lower-gain 12AU7, and using the lower-sensitivity input, to get a bit more headroom, or at least a bit more control before feedback sets in. This is not an option that can be combined with the Squeal Killer — you simply won’t have enough volume — but it also doesn’t result in the same degree of anti-feedback effectiveness.

The active element of the Squeal Killer circuitry is the 12AT7 tube, which is deployed in an unusual configuration by its designer Jason Lockwood (no, we’re not related!). I’ve agreed not to divulge any proprietary information, but I don’t think I’m giving too much away if I say we measured a degree of level-dependent attenuation, in other words compression, that may be the final part of the puzzle.

The more cynical tend to automatically regard anything with very few components and a high-ish price tag as some kind of ‘snake oil’, but I’ve always liked simple bits of circuitry that do one job really well. This one certainly does that. It introduces no noise — that’s no surprise, since the tube is not amplifying — and you can’t get its settings wrong, because there aren’t any. Also, because the active stage is in parallel with the signal path, it doesn’t matter in which direction you decide to patch through it!

There are other dedicated anti-feedback boxes for harmonicas but none that I know work quite like this. For the sake of completeness, I compared the Squeal Killer with a digital feedback eliminator of comparable price and found, to my surprise, that whilst I could easily achieve the same degree of feedback immunity, I could not do so without adversely affecting the sound — there was some noticeable dulling of the upper mid-range. Sensible performer positioning and mic handling will always be important too, but with those in place, the Squeal Killer can indeed do exactly what it says on the tin. Dave Lockwood