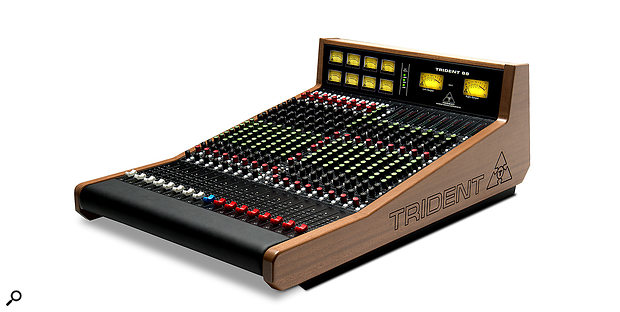 Does this modern take on a celebrated console stay true to the original’s heritage?

Back in the late 1960s, London’s Trident Studio quickly built a reputation as one of the first studios to go to if you wanted to record a hit — clients included Genesis, Supertramp, Lou Reed, David Bowie, Elton John, Marc Bolan and Queen, and even the Beatles ventured there when they needed an eight-track tape machine to record ‘Hey Jude’ (Abbey Road still used four-track devices at that time). Trident’s success wasn’t all down to gear, of course, but the mixing console did make a significant contribution.

Back then, multitrack recording consoles weren’t items that you could buy or even order from your local dealer. In the case of Trident, the engineers and studio owners sat down and discussed their needs, and then engaged some design engineers to create something that would meet them. The sound of the preamps, when pushed hard, and of the EQ section in that first console, combined to create a uniquely appealing ‘voice’. Trident went on to build and sell various versions of this mixer commercially, many of which found their way into studios in the USA.

The Trident brand and associated intellectual property has long since passed into the ownership of PMI in the US, and that’s where the latest incarnation of the console, the Trident 88, is built. The design work, though, was done here in the UK by Taz Boghal, one of the lead electronic engineers at Trident when the Series 80B started life. Taz stayed with the company until 1988, but is now employed by PMI as the lead electronic engineer for their Trident range. He’s endeavoured to improve both the specifications and feature set, while keeping the new console faithful to its Trident heritage.

Standard production models come in eight-, 16-, 24-, 32-, 40- and 48-channel sizes, but larger versions are also available on request, and are built to order. We were invited to review the smallest model, which has eight input channels and eight bus/monitor channels but is still quite heavy and boasts exactly the same feature set as its larger siblings. At a hint over three feet from front to back, and with the top of the meter bridge standing around 13 inches from the base, this is a solidly built console. It has a substantial rackmountable external power supply, which helps to keep magnetic fields well away from the audio circuitry. A fan is used to cool the PSU, and although it isn’t particularly noisy, I’d still have liked it to be a little quieter.

One of the main benefits of the Trident 88 series is that, as well as the in-line channel strips providing two inputs each at mixdown, there’s a split-console-style monitor/group section, allowing the monitor channels to be used as bus masters, conventional monitor inputs or additional line inputs when mixing. In practical terms that means that, at mixdown, even this smallest model offers a very generous number of inputs, each with separate EQ. The control layout is deliberately conventional, so it should feel familiar to any engineer brought up on an analogue console, but there’s enough flexibility for integration into a number of modern DAW-based studio configurations.

In this particular configuration, then, it’s an obvious competitor for high-quality compact consoles such as API’s The Box (http://sosm.ag/api-thebox).

Cost options include Lundahl 1538 transformers (for any or all of the input channels) and Lundahl 1517 output transformers, and these can all be retro-fitted to consoles that are bought without them. Our review model didn’t have any transformers fitted, and the TriMix fader automation package option wasn’t available while testing (we’re told that this will be available soon). There’s also a choice of a moving-coil or LED bar-graph meter bridge, though you’ll have to decide at the time of purchase which you prefer, as these can’t be swapped at a later date. The review sample was fitted with back-lit VU meters.

The vast majority of the switches are illuminated and the familiar straight-sided Trident aluminium knobs are used for all rotary controls, with red, black and green anodising used to separate the functions visually. The master fader has a blue cap, the input channels have white caps and the group faders have red caps — all of this is a simple yet very effective means of helping you find your way around the console quickly and easily.

In this cropped rear-panel shot, you can see the connections for two input channels on the far right. Unusually, these include a dedicated input for external mic preamps, bypassing the onboard ones, which could come in handy in a modern studio.All the relevant rotary controls, such as cut/boost knobs, incorporate centre detents and all the knobs have a smooth, positive action. The same can be said of the faders and switches, which all felt top-class to me. I did, however, feel that the master monitor level control could have been made either a different colour or a different size, as it isn’t always easy to locate it, especially as the console legending uses a fairly small and light font that can be difficult to read in a dimly lit studio. This is a very minor issue, though, and one that sticks out more in testing than when you own a product such as this — I’m sure you’d very quickly come to remember where it is!

The construction is largely old-school, insomuch as there are solid wooden end-cheeks and a ‘sit-up’ meter bridge. The desk is fully modular, so individual strips may be removed separately for servicing or exchanging. Discrete components, including a transistor front end, are used for the Class-A mic preamps. The chip stage is socket-mounted, though most of the components that come after the preamp stage, other than the electrolytic capacitors and some active devices, are surface-mounted on through-hole-plated, double-sided PCBs. That means that servicing is most likely intended by changing strips rather than diving in with a soldering iron. Realistically though, unless you’re unfortunate enough to have a master module or PSU die on you, you should be able to carry on working after removing the offending module. All the modules plug into a back plane and are easily removed after unscrewing two retaining screws. A jumper on the input channel board allows the direct channel output to be sourced pre- or post-EQ.

All the main connections are on the rear, with the mic inputs presented via XLR/jack combi connectors. The jack section is essentially a 20dB padded input with no phantom power. Other than the main, monitor and talkback mic connectors (all XLRs), the connectors are quarter-inch jacks. While D-subs and the like might be neater, they’re harder to wire up and generally rather more expensive to buy ready made, so this is no bad thing. Vertical rows of sockets cater for Line Input, Monitor Return Input, Channel Insert (unbalanced TRS send/return jack), Direct Out, Mic Insert and Mic inputs. 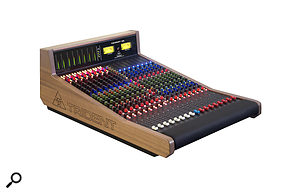 All sizes of Trident 88 are available with an LED meterbridge pictured here, or the more expensive VU meterbridge shown in the first picture.In this configuration, the input channels are arranged to the left of the master section, with the Group channel strips located to the right. The moving-coil metering for the channels is arranged in two rows, while the main output is watched over by two larger moving-coil meters. Green and red LEDs at the bottom of each channel strip act as signal-present indicators and peak warning indicators.

The input module follows the familiar in-line format, with both the input and the monitor (tape returns) on the same channel. The TRS insert point is switchable to pre- or post-EQ but there’s also a dedicated and switchable ‘Mic Preamp Insert’. Despite the name, this is really an alternative input rather than an insert: it’s an unusual but very useful feature in the modern studio, as it allows you to bypass the internal mic preamp while patching in an external one. The audio bandwidth of the circuitry is impressive, reaching around two octaves above the range of human hearing, with barely a third of a decibel deviation from flat.

At the head of each input channel is a small routing section for the main channel path, with buttons for the four group pairs and one for the main mix bus. Channel pan pots are used to steer signals between odd and even buses in the usual way. As with many consoles that use conventional routing buttons, channels can be sent to both the stereo bus and any bus group pairs at the same time, which makes it really easy to set up parallel compression.

Below this section is a pair of gain controls, one each for the mic and line inputs. Push switches select the mic insert, +48V phantom power, mic/line input, polarity invert, channel monitor and ‘Input Reverse’. Input Reverse selects between the line and monitor inputs: the selected source goes by default to the monitor section of the input channel. The channel monitor path routes directly to the stereo bus and is controlled by a rotary level control rather than a fader. However, switching on both Line and Input Reverse sends the monitor mix through the main channel path, so that the mix can be handled using faders and the full complement of sends and EQ. The Channel Monitor control determines whether the meter shows the Direct Output level or the Monitor Return level.

The transformerless preamps that featured on our review model sound nice and clean, but without being in any way ‘clinical’. With sources such as drums or bass guitar, you can push them some way into the red to thicken up the sound in a musically useful way, too. A generous degree of overload abuse may be useful to liven up a solo snare drum, but on most sources, you’ll need to judge the amount of overload very carefully and that can only be done by ear — if you overdo it, that gentle warmth eventually gives way to much more obvious distortion.