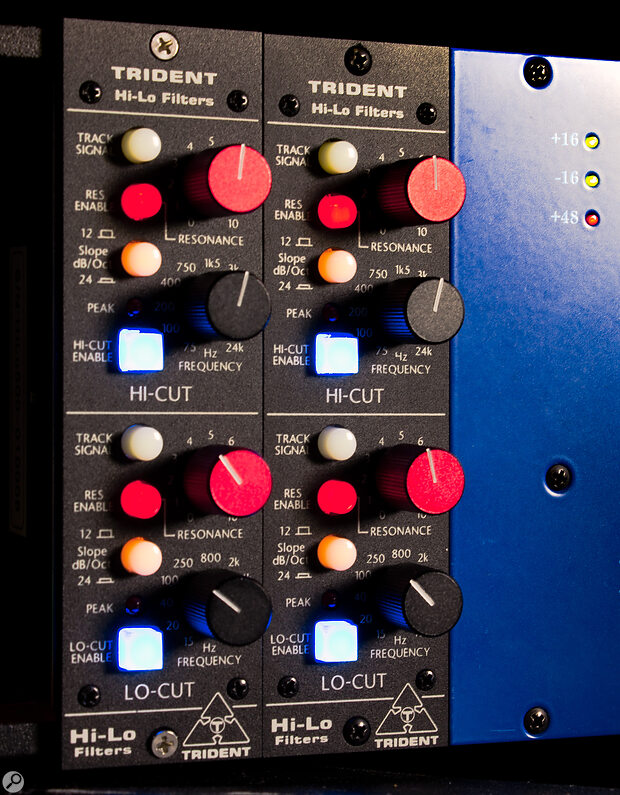 The latest device to sport the Trident brand name actually has its origins in a product made back in the day by a company called CLM Dynamics. Alan Hyatt, who owns Trident’s parent company PMI, has long been a fan of CLM’s Expounder, which is a unique analogue four‑band stereo EQ that includes a pair of resonant high/low‑pass filters. It was the filter stages in particular that appealed to Hyatt — we have plenty of options for more conventional EQs now, but the Expounder’s filters are dynamic, adjusting their frequency according to the input signal level. So he decided to make them available in the form of a 500‑series module.

The result is called the Hi‑Lo and PMI decided to release it as part of their Trident range. The basic design is essentially the same as in the old CLM device, but some component choices and modern manufacturing methods have brought down the noise floor and distortion.

The Hi‑Lo comprises two filters and the front panel is divided accordingly, with the high‑pass one in the upper section and the low‑pass beneath. With all the controls and labels, the panel may appear quite dense at first glance but it’s actually all very clearly presented and easy to read, and there’s plenty of space for your fingers to access all of the controls too.

Each filter has a pair of pots, one to set the Resonance and the other the filter Frequency. There’s also a trio of round backlit buttons that engage the Resonance control (red light) and amplitude tracking (green) and switch the filter slope between 12 and 24 dB/octave (orange). A fourth square blue‑backlit button engages and bypasses the filter. So there are 12 user controls in total. They’re fairly bright when lit, but these buttons don’t blind you; it’s easy to see the status and to read the legends at all times. Each filter also has a peak LED, which is the only metering on these modules; you don’t really need more.

The Hi‑Cut (low‑pass) filter can be set to any frequency between 75Hz and 24kHz, and the Lo‑Cut (high‑pass) between 15Hz and 16kHz — both are very broad ranges and they have massive overlap, which makes them very versatile. Setting each band’s Resonance control to maximum (marked from 0 to 10) produces a resonant peak of around the turnover frequency of about 12dB.

These, then, are more akin to the filters you might find in a synth system than in a typical recording/mixing channel EQ. But the electronics are clean and quiet and the filters are definitely of a standard that’s suitable for professional recording and mixing. 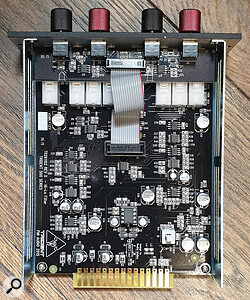 The white switch in the bottom-right of the picture links adjacent modules for stereo operation.I was sent a pair of Hi‑Lo modules for my review tests, and armed with a pair you can use them in a few different ways. Obviously, they can each be used as mono devices. There’s also a stereo link switch inside, which allows you to configure the pair for true stereo use. This is a push‑switch, but while that’s better than the jumper you’ll find in some other companies’ modules I’d have preferred access to this switch on the front — there’s certainly space inside the module to allow that and just about enough on the front panel too. Less obvious is that you can link them and use them in series, with the output of one feeding the next; the effect is to create a mono device with more filter slopes: 36 and 48 dB per octave options result from stacking the two filter stages. Near the stereo link switch, is a jumper to allow the module to feed the mix bus of Radial’s Workhorse racks.

What most sets these apart from other filters you’ll find in 500‑series format is their dynamic behaviour. When their Track Signal button is engaged, the turnover frequency is changed very quickly in response to the amplitude of the source. The result is that the filters tend to act rather like a gate, with louder signals causing the pass band to widen and lower levels causing it to narrow.

Given the extensive range and overlap of the two bands’ frequency ranges, there are both corrective and creative applications. For example, it can be an effective means of noise control. If you have, say, an electric guitar or bass part that’s been recorded with a distracting amount of hiss, you can set the Hi‑Cut filter so that the frequency rolls down in between phrases. While the bass/guitar is playing, the wanted sound acts to mask the hiss, and in between, the filter makes it much less noticeable. It’s a much smoother, more natural‑sounding transition than with a gate, with much less damage to the tails of notes (particularly on tremolo parts that can cause gate ‘chattering’); they may become a little darker but aren’t cut short. It can also be set much more aggressively than a static filter without compromising the wanted sound.

The Hi‑Lo can be a really fun way of injecting some interest and movement into a rhythmic part.

This is an effect that you can achieve in software with automation but the Hi‑Lo approach is less laborious. In fact, the only thing I’ve used in software that comes close is Reaper’s Parameter Modulation, which is still a little more fiddly. Note that you could also use the Hi‑Lo in a monitoring path, or to clean a vocal part while performing (eg. when live‑streaming).

At the low end, you can tackle low‑level rumbles in a similar way, a potential advantage being that you can be fairly aggressive in the filter settings without low‑end phase shift becoming a headache.

Naturally, with a high resonant peak the movement of the filter frequency becomes much more ear‑catching. With high signal levels and the resonance control at maximum, it stops just short of self‑oscillation, to create a sort of ‘whistling effect’. So the Hi‑Lo can be a really fun way of injecting some interest and movement into a rhythmic part. I was able to dial in some really appealing effects on some stabbed synth chords and a synth bass part and, with the Resonance at maximum, I had great fun transforming some rather pedestrian‑sounding drum loops into something with far more mojo. In fact, any source that’s really dynamic is ripe for experimentation, and I have a feeling it could prove just as handy a tool for sound design as for EDM. It could appeal to anyone performing synth parts live: yes, when you boil it all down to its essence, it’s just a pair of resonant filters, but as they respond to the signal level, they leave your fingers free to tweak other things!

It’s been a delight to have had this pair of Hi‑Lo modules in my Lunchbox rack for the last couple of months. I can see (and hear) why Alan Hyatt was such an admirer of the Expounder’s filters, and he’s to be commended for breathing new life into this classic design while also making it sound so clean and quiet. I think the decision to release only the filters rather than opt for a painstaking recreation of the original was the right one — after all, we all have so many ‘regular’ EQs to choose from now and this makes it possible to mix and match to taste.

Other than the stereo link switch being internal I really don’t have any criticisms but I did find myself considering how PMI might develop the design further. There’s certainly scope for something like this to be migrated to the Eurorack format that’s so popular with synth enthusiasts — if they were to go down that road they should consider adding a CV input, and perhaps a sensitivity control for each band to allow each one to respond differently to the signal level — and I could also see a dedicated low‑pass tracking filter appealing to guitarists if it were delivered in stompbox format, as it really is a great tool for dealing with hiss. But that’s all idle speculation: in the meantime, if you’re into the 500 series, I highly recommend making the effort to check out the Hi‑Lo.

A successful modernisation of the classic CLM Expounder’s dynamic high‑ and low‑pass resonant filters, the Hi‑Lo can be both a fun and a practical tool.