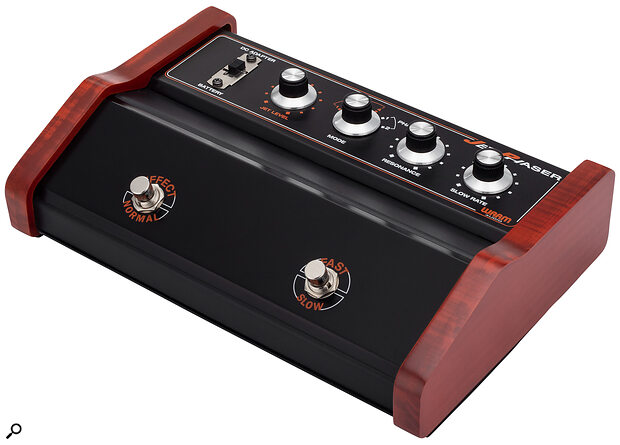 I can recall, back in the 1970s, lusting after the then newly released Roland Jet Phaser AP7. I was working in electronics at the time and had been trying to build my own phaser operated by a pedal rather than an LFO, in an attempt to emulate tape phasing (which had yet to be re‑christened ‘flanging’). To my young ears, the Roland Jet Phaser sounded so much richer and more exciting than my own efforts. Originals now cost an arm, a leg and probably at least one vital organ, so thankfully Warm Audio have come to the rescue: their new Jet Phaser is a recreation of the original. It’s slightly different, in that it adds true bypass, metal film resistors, film capacitors and a slightly different look courtesy of wooden end-cheeks, but in most respects authenticity is respected.

Solidly built and weighing a hefty 4.6 pounds, the pedal’s main case is made from what appears to be powder‑coated steel sheet, whereas the original Roland unit was a casting finished with crackle paint. However, the rotary control layout exactly matches that of the original. Power comes from an 18V PSU or two 9V batteries, and because the current consumption is only 9mA, the battery life is sensibly long. A slide switch changes from battery to DC Adaptor operation — on the Roland original the Jet Level control had to be turned fully anti‑clockwise to turn off the power. One minor niggle with this new incarnation is that you have to remove four cross‑head screws and a metal plate to access the battery compartment underneath the case; that could easily be made more convenient.

As with the original, the routing is strictly mono‑in, mono‑out via rear‑panel metal jack sockets.

Those fuzz‑enriched Jet settings sound just as whooshy as they do on the original.

The Jet Phaser has a rotary mode switch offering six modes, two described as Phase and four termed Jet, the latter combining fuzz with phasing. Of the two phasers, the second produces the most pronounced effect but both are very musical. The four Jet options are: Bright fuzz/shallow phase, Bright fuzz/deep phase, Dark fuzz/shallow phase and Dark fuzz/deep phase. These Jet modes have their own level control, so you can also dial in a bit of boost, which could be useful for soloing.

A Resonance control is available in all six modes, and this creates a more pronounced ‘whining’ effect, by feeding some of the output back to the input. There’s also an LFO speed control labelled Slow Rate, the reason for the name being that when you hit the Fast footswitch, the rate accelerates to its highest possible speed, which is fixed. The speed change rate is ramped so I guess the idea was to create a parallel to the Leslie rotary speaker effect, whereby mechanical inertia limits the rate at which speed changes can occur. 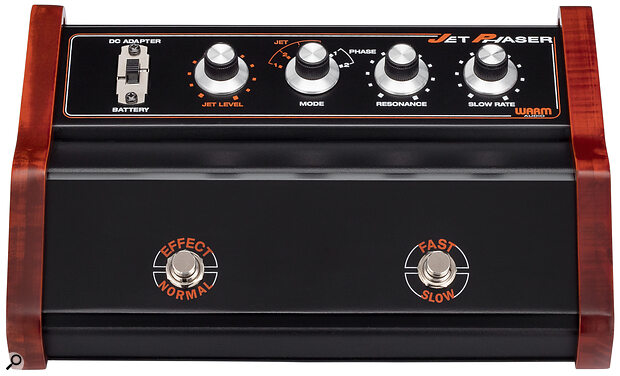 Physically, the Jet Phaser is quite large (it’s 10.25 inches wide), so it may not be as pedalboard‑friendly as some of the newcomers, but in the studio this is less of an issue and it leaves plenty of space between the Bypass and Fast footswitches. The sound matches my memories of the original, with a deliciously smooth phase sound that doesn’t churn things up in quite such an obvious way as can some of the more basic phaser pedals. It works brilliantly on electric piano as well as guitar.

I love the fast/slow speed ramping feature and those fuzz‑enriched Jet settings sound just as whooshy as they do on the original. Although the fuzz has no user controls, I found that it worked well with both single‑coil and humbucking pickups, and although the combined fuzz/phase sound harks back to a bygone era, I’m sure it could find applications in plenty of modern productions.

Even without the Jet sounds, this is a delicious‑sounding phaser that should fill the needs of funk players or those trying to replicate some of the gentler Jimi Hendrix and David Gilmour effects. Best of all, though, is that you won’t need to sell your spleen to get hold of one.