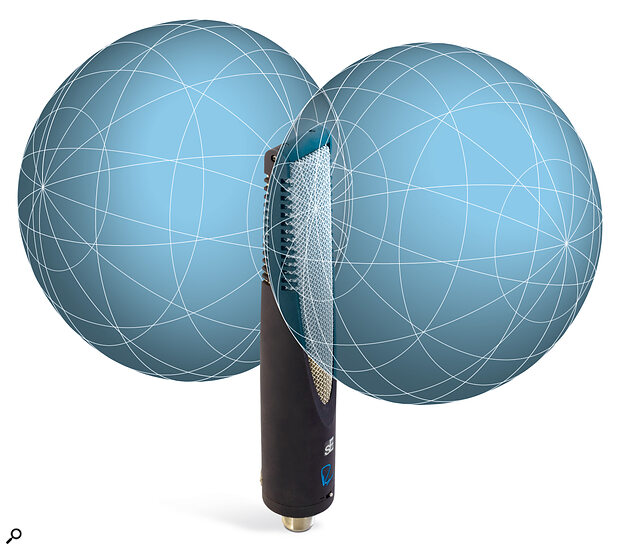 Figure‑of‑8 mics, such as this sE RNR‑1 ribbon model, are equally sensitive to sound at the front and rear of the diaphragm, but reject sound that arrives side on (whether on the horizontal or vertical plane).

Choose a mic with the optimum polar pattern for the job, and you’re halfway to capturing a great recording.

A lot of inexperienced recordists reach instinctively for cardioid mics to record just about everything, believing that this pattern inherently captures less unwanted room sound. But, while cardioids often do work well, there can be very good reasons to make a different choice, and if you learn to understand the strengths and weaknesses of the various microphone polar patterns, you’ll be able to make better recordings.

Although I said ‘various’ patterns there are actually only two fundamental ones: figure‑of‑eight and omnidirectional. All of the others you’ve heard of are derived from these two.

All mics respond to air pressure: the capsule’s diaphragm is only moved when there’s an air pressure difference between its front and rear faces. But they behave differently, depending on the design of the capsule around the diaphragm.

If both faces of the diaphragm are open to the air, it’s what we call a ‘pressure gradient’ mic and it will have a figure‑of‑eight polar pattern. Often abbreviated to ‘fig‑8’, these mics are so called because they’re equally sensitive to sound at the front and rear, but insensitive at the sides: their pickup pattern resembles the number ‘8’ or, in three dimensions, two slightly squished spheres (shown above). Though equal in sensitivity, the front and rear pickups are opposite in polarity. Sounds approaching the diaphragm edgeways on are rejected because they cause the air pressure to be equal on each side of the diaphragm — so the diaphragm doesn’t move. 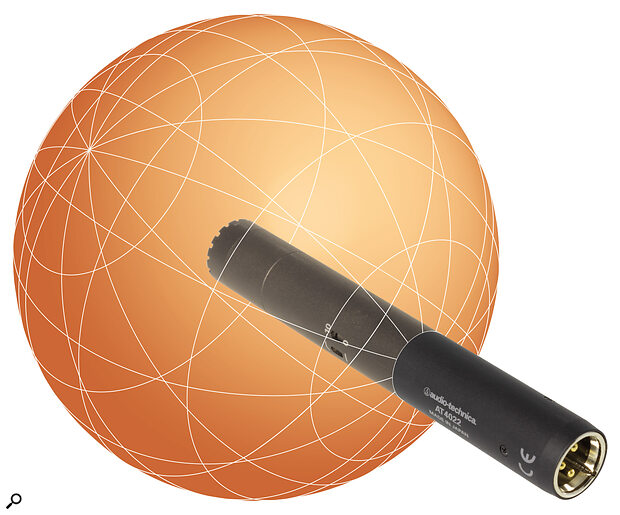 Omnidirectional mics, such as this Audio‑Technica AT‑4022 small‑diaphragm capacitor model, are equally sensitive to sounds arriving from all directions. Hence, the polar pickup pattern is a sphere centred on the capsule. Importantly, off‑axis and on‑axis sounds have the same tonal balance, and an omni mic has no proximity effect bass boost.

If, instead, you place the diaphragm across the mouth of a sealed chamber, you’ll have an omnidirectional, or ‘omni’ mic. These sense the difference between the air pressure at the diaphragm’s external face and the air pressure inside the chamber. Since there’s no difference between the external air pressure at the front, rear and sides, omni mics are equally sensitive to sound arriving from all directions: their pickup pattern resembles a circle, or rather a sphere, with the capsule at its centre.

Omnis and fig‑8s both retain a good balance of frequencies as the source moves off axis. While the sensitivity of the fig‑8 falls off as a source moves towards the side of its capsule, its overall tonal balance remains essentially constant; all frequencies are attenuated equally.

Also worth noting is that fig‑8 mics can be quite susceptible to handling noise and wind noise, and they have a strong proximity effect: as they’re moved closer to the source the low‑frequency sensitivity increases more than the high‑frequency sensitivity, the practical upshot being that the overall balance is skewed in favour of the lows. Omni mics have no proximity effect and are less susceptible to handling and wind noise.

Fig‑8 mics have an evenly balanced off‑axis response, even though the overall level drops as you move towards that 90 degree null. 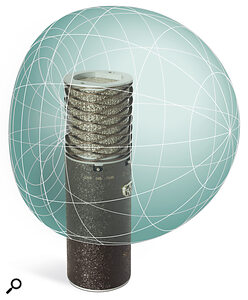 A cardioid pattern, as available on this Aston Spirit multi‑pattern capacitor mic, is a 50:50 blend of omni and fig‑8: the omni pattern reinforces the fig‑8 front lobe but cancels at the rear, to create a heart‑like pickup pattern.As mentioned, the directional polar patterns (eg. cardioid, wide cardioid and hypercardioid) are blends between omni and fig‑8. So if you placed omni and a fig‑8 capsules in close proximity and kept them equal in level, their combined pickup pattern would be the same as with a dedicated cardioid mic. This happens because the fig‑8 mic’s signal is the same polarity as the omni’s at the front but opposite at the rear: their patterns reinforce at the front but interfere at the rear.

The result is the familiar heart‑shaped pattern in front of the capsule (hence the name ‘cardioid’) with a null at the rear. Alter the balance between the mics and you vary the shape, including the width, of the virtual pattern. As you increase the fig‑8’s contribution, to narrow the front pickup, a lobe appears at the rear, which is why a hypercardioid mic tends to be least sensitive 30‑45 degrees off its rear axis, rather than directly behind the capsule. 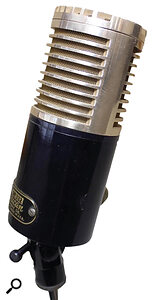 Some vintage mics were constructed with both a fig‑8 ribbon and an omnidirectional moving‑coil capsule: by blending the output of each one, different polar patterns were...