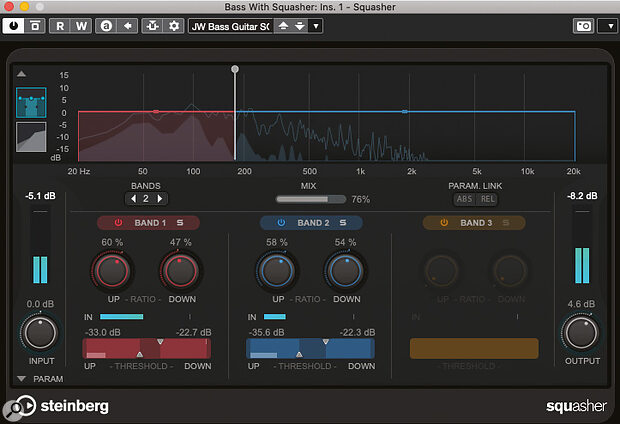 Example 1: Squasher, used in two‑band mode to even out a recording of a bass guitar performed with too much dynamic variation.

We explore four ways to make the most of Cubase 11’s new multiband Squasher plug‑in.

The new Squasher plug‑in Cubase 11 (Elements, Artist and Pro) has obvious appeal as a ‘make it loud’ tool for EDM but, with downward and upward compression, multiband operation and band‑specific side‑chains, it’s capable of much more. To help you get started, here’s my choice of four things to try with Squasher. You’ll find audio examples for each tip on the SOS website (https://sosm.ag/cubase-0321).

In most contemporary mixing contexts, mix‑critical elements such as bass and lead vocals need to maintain a broadly consistent level throughout. Conventional (downward) compression has its place, but detailed volume automation and plug‑ins such as Waves’ MV2, Vocal Rider and Bass Rider offer additional possibilities. As well as bringing down the peaks, they can also raise quieter notes/sounds. Squasher can do this too.

The Up and Down ratios can be adjusted to taste; alongside the Up and Down thresholds, these allow you to dial in as much/little upward and downward compression as you require. I also used the global Mix control to blend the original and processed signals to taste: essentially, this is parallel compression, and the end result is a part that’s much more even and easier to sit in the mix. As a bonus, the Gain for the two bands lets you adjust the tonality of the bass while mixing and, if you want to dig even deeper, you can also open the Parameter panel and adjust the compressor attack/release times for each band.

As it relies on upward compression, my second example — making low‑level detail in a performance more prominent — isn’t a million miles from the first, but the musical target is different. Two common applications are: (a) making ghost notes in a snare track more audible; and (b) enhancing the level of percussive elements in an acoustic guitar recording. In both cases, these lower‑level elements can be important to the character of the performance, but might require adjustment to be satisfactorily balanced alongside other elements in the mix. 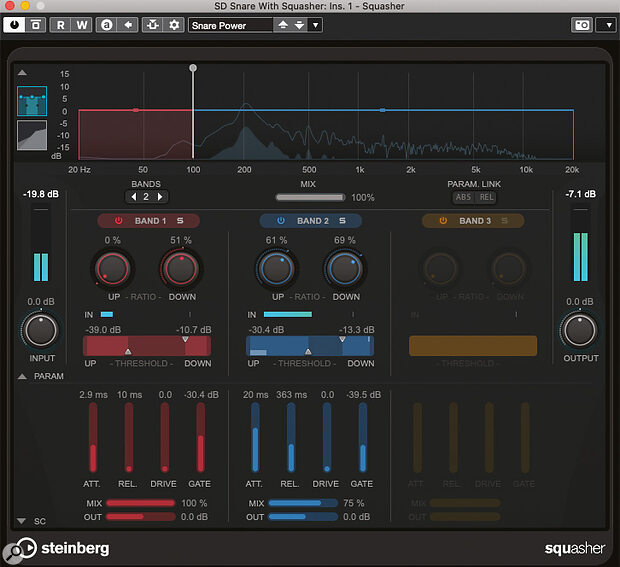 Example 2: Squasher’s ability to apply upwards compression is great if you need to make low‑level details in a performance more prominent; it’s used here to raise ghost notes in a snare track.

Example 2 screenshot shows a Squasher instance applied to the close snare mic in a multitrack drum recording. It also features two‑band operation but this time the split is around 100Hz. The low band has a high gate setting and no upward compression applied, so as to reduce bleed from the kick drum into the snare mic, and prevent upwards compression making any bleed louder. The bulk of the snare sound occurs at 100Hz and upwards. For this band, I’ve applied both downward and upward compression.

As demonstrated in the audio examples, the latter catches any ghost (softly played) snare strokes, and the degree of upward compression can control just how loud these get relative to the main snare hits. It’s a simple means by which these sorts of low‑level playing details can be drawn out and placed within the overall mix without impacting upon the louder parts of the same performance.

Squasher can be used to inject some intensity into drum loops. Example 3 screenshot (with accompanying audio example) shows some settings I used to add an edge to a fairly ‘vanilla’ electronic drum loop. I’ve used all three Squasher bands and set the frequency splits so that the low band is focussed on the main energy of the kick, the mid‑band on the snare and the high‑band on the hi‑hats. If required, the Gain settings for each band can be used to adjust the balance between these three elements (here, I’ve boosted the lows and highs). Experimenting with the upward and downward compression settings for each band allows you alter the amplitude envelope for each ‘hit’ in some interesting ways. 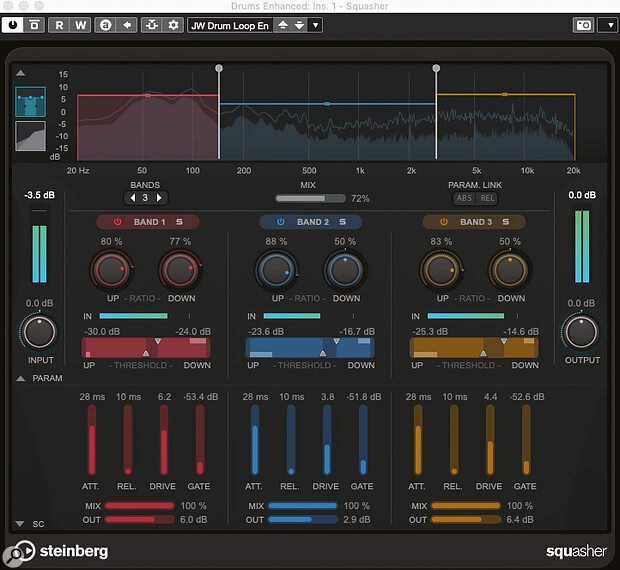 Example 3: If your drum loop feels a little tame and uninspiring, full‑on Squasher might add just the edge required.

I’ve deliberately gone for something big and splashy: in each band, a fairly conventional amount of downward compression is combined with completely over‑the‑top upward compression (a combination of high Up ratio and threshold settings). Combined with a fast release, this brings out the tails of each drum hit, and in the audio file it’s particularly noticeable in the hi‑hats. Slower attack times allow transients to pop through, to retain a sense of impact. I’ve also applied some Drive to each band, for a little extra grunge. The ability to solo and disable individual bands can be very useful when you’re tweaking the various compression settings.

Squasher, then, can be a very useful source of ‘attitude’ if your drum loop needs a push. It’s worth noting that, while I might have sacrificed good taste for an in‑your‑face result here, the global and per‑band Mix controls allow you to dial things back a little.

As with Cubase’s other multiband processors, each band in Squasher can be set to respond to a different side‑chain source. This can have a number of applications but the screenshot for this example (Example 4) shows an instance of Squasher inserted on a rhythm guitar bus. The guitars in question provide a chunky, slightly overdriven sound, occupying a broad frequency range. The high‑frequency band (above 2kHz) is used, as before, to provide fairly gentle upward and downward compression. However, two different side‑chain input sources (the side‑chain input sources can be configured via the side‑chain settings drop‑down dialogue in the plug‑in’s top menu bar) are used to control the compression applied to the guitars in the low (below 200Hz) and mid bands. 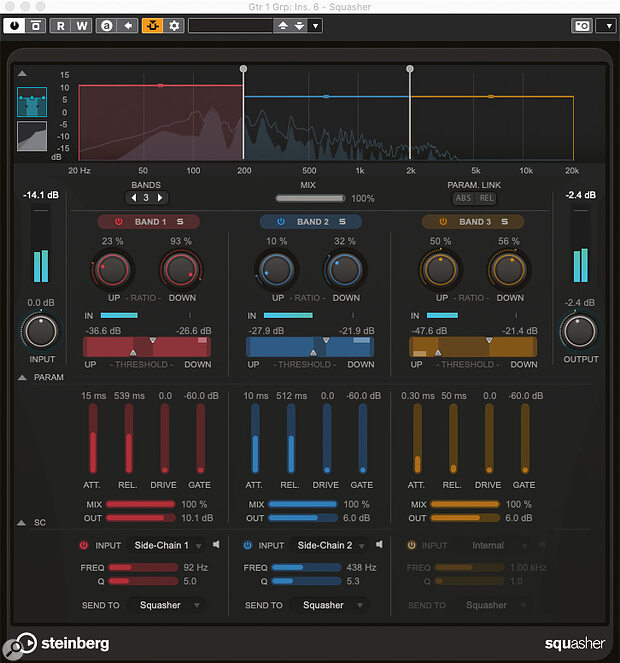 Example 4: The ability to use different side‑chain input sources within each of Squasher’s bands makes it a great tool for ducking a target such as rhythm guitars or synth pads out of the way of things like bass or vocals.

For the low band, the bass guitar provides the side‑chain input — so when the bass plays the low‑end of the guitars is ducked, allowing the bass to be heard more clearly. In between the bass notes, I’ve also applied a modest amount of upwards compression, so that these frequencies in the guitars are raised by a dB or two to gently fill in the low‑end space.

You can configure multiband side‑chain‑driven compression in other ways in Cubase 11, but Squasher provides a neat one‑stop‑shop for this kind of task. It’s worth noting, though, that unless you want obvious pumping, you should use fairly slow attack and release times, and low ratio settings for the upward compression.

As with any compression task, you must tailor the settings to the source, but hopefully these examples will inspire you to explore Squasher further. There are plenty of other applications for it, including hyping your latest EDM mix — indeed, Squasher is impressive in that role, but as with most master‑bus processing do take care and pay attention: it’s just as easy to ruin a good mix as it is to enhance it!

Each band in Squasher can be set to respond to a different side‑chain source.