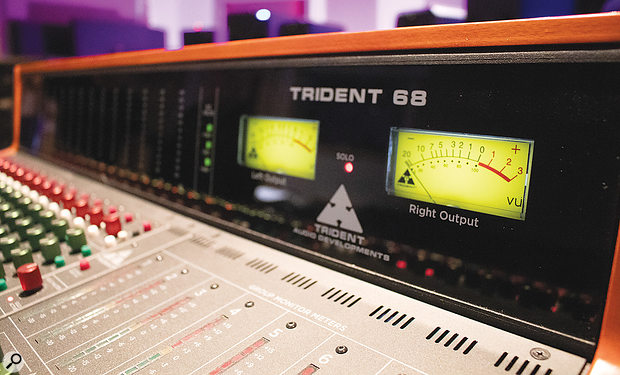 By changing their manufacturing approach, Trident aim to offer their big-console sound and facilities at a much lower price.

The Trident Audio Developments brand has a long and unusually complicated (and contentious) history, which has been detailed in many previous reviews in SOS, so I'll not dwell on it here. Suffice to say the original British brand dates back to the beginnings of multitrack recording in the early 1970s, and the name is now owned by the American pro-audio company PMI. Of course, despite the change in ownership, key features of the famous British consoles' unique circuit topologies have been incorporated in various current Trident outboard products, and they have also heavily influenced their large-format mixing consoles — indeed, the designer of the current family of Trident consoles was an engineer with the original Trident Audio Developments company back in the mid-'80s, and is intimately familiar with all that makes those early consoles special.

Sitting as the flagship model in this range is the Trident 88, which Paul White reviewed in SOS January 2016. I reviewed its more cost-effective sibling, the Trident 78, in December 2017, but now there is a third, even more affordable model: the new Trident 68. Launched at this year's Winter NAMM show, this latest console retains all of the style, the workflow, and most of the features of its larger siblings, but the cost-reducing techniques introduced in the Trident 78 console have been further extended and several other aspects re-imagined, so that the price of this new Trident 68 is about 30 percent lower than the equivalent sized Trident 78. 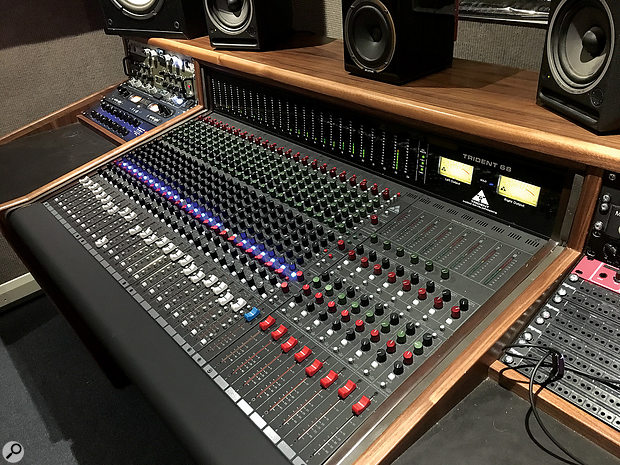 Available in two frame sizes, with either 16 or 24 input channels (each with main and monitor input paths, as in the sibling consoles), the Trident 68 retains the eight mono subgroups, eight mono monitor returns, and eight stereo effects returns, plus stereo master and monitor section of its siblings. All that I/O means that a 16-channel console can accommodate a total of 56 inputs for mix-down, while the 24-channel version manages a whopping 72 inputs.

The console's channel strip layout has been altered slightly in response to user feedback, and is much to the better, in my view, but the overall configuration and signal paths remain very similar to those in the other Trident consoles. Physically, the input channels and groups are now constructed with eight to a module, instead of four-channel modules of the Trident 78, or the single-channel approach of the Trident 88, and this obviously helps to lower the production costs. That said, each channel's electronics are still contained on individual circuit cards, suspended vertically beneath the panel's controls in the traditional way. 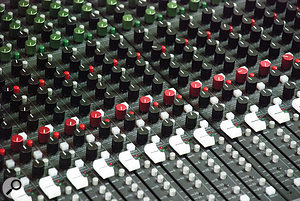 Compared with the more expensive consoles in Trident's current range, the EQ section (black knobs) has been brought within easier reach, and although there are now three bands compared with the other models' four, it's a very versatile design.The most obvious visual difference between the Trident 68 and the previous models is that the meter upstand features LED bar graphs instead of moving-coil VUs for the channel metering (mechanical VU meters are still used for the main stereo outputs). Less immediately obvious is that the bus routing buttons have moved — previously they were placed above the input section, whereas now they sit alongside the faders — and the channel strip aux and EQ sections have been swapped over too, making the EQ easier to reach.

These adaptations are largely in response to feedback from customers of the previous consoles. It makes good sense to me to have the EQ section closer to hand because it tends to be used all the time, whereas the auxes are often more 'set and forget' controls. I'm not personally quite so convinced about moving the routing switches, though; I've never liked buttons adjacent to the faders, as I find they tend to get in the way and can be activated accidentally when mixing... but, to be fair, a lot of other consoles are built in exactly this way and I have a feeling more than one person would feel differently!

Most of the rear-panel I/O are on DB25 D-sub connectors, wired to the usual standard, with only the master and monitor outputs present on XLRs.All of the console's I/O is balanced and accessed via AES59 (Tascam) 25-pin D-sub connectors, with XLRs only provided for the master and monitor outputs. Each eight-channel input module has six D-subs to handle the mic inputs, line inputs, monitor inputs, direct outputs, and the insert sends and returns. Similarly, the master section has nine D-subs (plus the four XLRs mentioned above), two carrying stereo effects returns (1-4 and 5-8), one for the aux outputs, two for the group insert sends and returns, one for the group outputs, another for the monitor external inputs, and then two more for the master inputs (monitor inputs plus main stereo insert returns) and master outputs (main stereo insert sends, duplicated main stereo outputs, duplicated main monitor outputs, and monitor alt outputs). 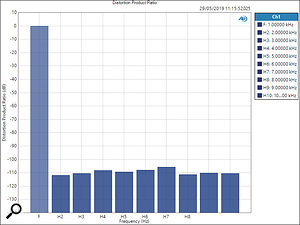 An Audio Precision test plot showing the very low distortion levels and the flat harmonic structure for all signal levels up to a decibel or two below clipping, at which point...Working through the input channel signal path, the mic and (padded down) line inputs share a new IC-based mic preamp with a 55dB gain range. Previous models have employed a discrete transistor preamp, alluding back to the original classic Trident design, but the Trident 68 uses a THAT 1580 low-noise preamp IC, supported by a THAT 1250 balanced line receiver and an Analog Devices OP07 op-amp. The claimed benefits include low noise and distortion, high slew rate, wide bandwidth and generous headroom. Most of the console's circuitry is built using surface-mount devices (SMD), of course.

As far as the user is concerned, though, the input section controls feature the same phantom power, polarity reverse, and input reverse buttons, albeit in a different order (input reverse swaps the line and monitor inputs so that the line input feeds the monitor path and the monitor return goes to the channel path, which is useful for mixdown). Moved from the input section is the button which selects whether the upstand meters show the post-fade channel or monitor return input signals — it's now found on the channel pan section, just above the fader. 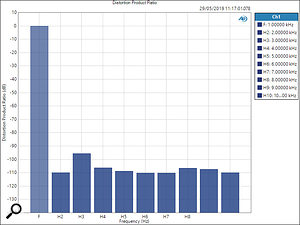 ...the third harmomic starts to become more prominent (but is still very low).Below the input controls is the aux send section, which is identical to that of the Trident 78. Level knobs and pre/post buttons are present for four mono auxes, followed by a pan, level control, and pre/post button for the stereo aux 5/6 send, which can also be switched independently into the monitor path.

One of the most significant changes for this new console is that the EQ section has been configured as a three-band plus high-pass filter affair. So there is a single swept mid-band instead of two as on previous models; it covers 200Hz to 3kHz with a ±15dB range. Some will bemoan the lack of a second swept mid-band, but the single section here is more versatile than most. Partly that's thanks to a switchable Q, which reduces the bandwidth to 1/3-octave for precise tonal correction. The high- and low-shelf bands have also been upgraded, with continuously tunable corner frequencies ranging between 1-15 kHz, and 40-650 Hz, respectively, while retaining the ±15dB range. A switchable third-order high-pass filter also retains the fixed 50Hz turnover frequency and, as in the other consoles, the entire EQ section (including the HPF) can be allocated to either the main or monitor signal paths.

The adjustable high- and low-shelf bands proved very versatile. In particular, I found the low band was almost Pultec-like in managing to add low-end weight without muddying up the mid-range.

I've already described the auxes, but I should mention that while post-fade channel auxes are silenced by the channel mute button, if Auxes 5/6 are switched across to the monitor path these are not killed by the monitor mute button.

Five buttons determine the channel output routing (after the channel pan control) to the main stereo mix bus or the eight groups in stereo pairs, while the monitor path output always feeds directly into the main stereo mix bus (with its own pan control). The channel fader is a standard linear long-throw type, but configured with 5dB of gain above the unity mark instead of the more usual 10dB, and the monitor fader is a rotary knob. A button on each channel strip allows the solo button to operate either as a standard channel PFL or a stereo AFL, and the bar-graph metering in the upstand can be switched to display either the channel path's post-fader output level, or the monitor return input level, as mentioned earlier.