The eight mono subgroups are located to the right of the master/monitor section and the structure is very similar to the related consoles, but a little simpler. After the group bus summing amp, the signal is dispatched via the (impedance-balanced) group send, with the selectable insert return feeding the group fader, which has 5dB gain in hand like the channel faders. The output from the fader is made available at the active symmetrical balanced group output, and can also be routed through the monitor return path instead of the dedicated balanced monitor input. 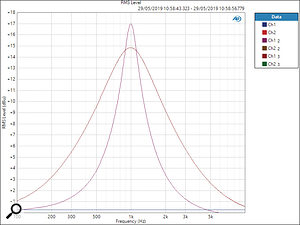 This pair of curves illustrates the broad and narrow Q settings for the mid-band parametric EQ section.An LED bar-graph meter at the top of the group strip shows the level going into the monitor path before the rotary monitor level control, and a pan pot feeds the main stereo mix bus directly. The monitor path can feed the stereo aux 5/6 bus via a pan pot and rotary level control, with a switch to select the feed pre or post the monitor level knob. The solo button provides an AFL of the monitor output.

Built into the same group strip is the corresponding aux master, which comprises a simple rotary level control feeding an active symmetrical balanced output. Sadly, as part of the cost-saving exercise, there is no AFL button here so it is no possible to audition what is actually being sent from any aux send. Each group strip also carries a stereo effects return, with balanced inputs feeding a stereo level control, balance knob, and mute button. 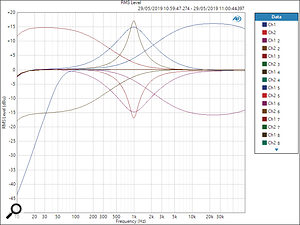 A set of EQ curves illustrating the high-pass filter, the high and low shelves, and the parametric mid-band with switchable Q.Again, the master/monitor strip is very similar to that of the Trident 78, and the only facility I can see that is missing is a mute button for the monitor outputs. The stereo mix bus summing amp drives an (impedance-balanced) insert send, with the selectable balanced return feeding the master fader (with 5dB in hand again). The active symmetrical balanced main outputs appear on both rear–panel XLRs and a D-sub connector.

The monitor section normally conveys the stereo main outputs, but it can be switched to either of a pair of external stereo two-track inputs. Both have balanced connections on a rear-panel D-Sub, but the first can also be over-ridden via a 3.5mm socket on the strip itself, for convenient playback from a phone or mp3 player. If the solo bus is activated that signal is automatically selected instead, and there is a separate volume control for the solo signal.

The monitoring controls comprise buttons to select a mono sum and/or dim, and a rotary volume control with routing to an alternative secondary set of monitor speakers. A separate volume control sets the level for headphones, which can be connected either on the monitor strip itself (3.5mm socket) or under the armrest (with quarter-inch and 3.5mm sockets). All three sockets are wired in parallel.

A built-in talkback microphone with a rotary gain control is provided, and features separate routing buttons to all six auxes or all eight groups, the latter activating the monitor dim function to avoid howlrounds. 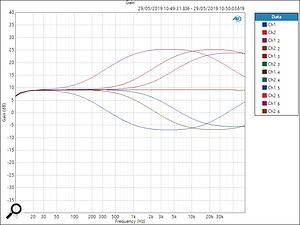 The full range of the sweepable HF band.At the time of writing there was only one Trident 68 console here in the UK — it had just been installed in Cherry Tone Studios in Folkstone, run by Andrew Thomas, who extended a very kind and helpful invitation to visit and have a play with it! So I trekked down to the South coast to gain some hands-on experience of this new console, and to run some test measurements using my trusty Audio Precision test system.

The split/in–line structure and the control-surface layout of the Trident 68 feels very familiar, and the signal paths are simple and logical to understand, yet provide versatile and convenient workflows. Integration with a DAW is also very straightforward, using the channel direct outputs and monitor returns to hook up with a multichannel interface. The controls feel solid and reliable, and everything falls to hand nicely — especially the channel EQ sections, which are much less of a stretch than on the sibling consoles. 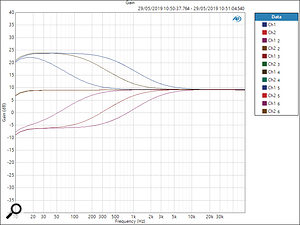 As above, but this time for the LF.I ran a conventional set of measurements to assess the console's technical performance, and my figures agreed very closely with the published specifications in most regards. The gain range of the mic preamp (measured at the insert send) was from +9 to +66 dB, meaning that a nominal +4dBu output can be achieved with input levels between -62 and -5 dBu (with faders at their unity positions). At minimal gain, the mic input clips with an input of +13dBu, delivering +22dBu at the insert send, which agrees with the specifications. The maximum level from all the actively balanced outputs measured a tad over +26dBu, and +22dBu from the impedance balanced outputs. The maximum input level at the monitor and insert returns was also +22dBu, while the channel line inputs could handle more than the AP test set could deliver (the specifications claim a whopping +37dBu)!

I measured the THD figures for a variety of input and output routings at a consistent 0.001 percent, which is actually slightly better than the published spec, and the harmonic content remained very even at all levels up to within about 1dB of clipping, where the third harmonic becomes more prominent. Crosstalk between adjacent channels was below 92dBu at 20kHz, which is a fine result. 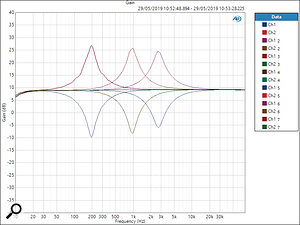 This plot shows the range of the mid–range band for narrow Q settings. 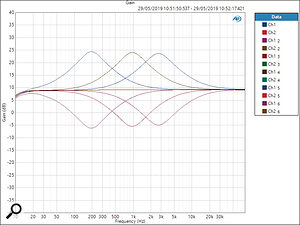 This plot shows the range of the mid–range band for wide Q settings.The mic EIN figure I captured was 2dB worse than the published figure, at -126dBu with a 150Ω source and 20Hz-20kHz measurement bandwidth. However, I subsequently discovered that the published spec is for 60dB of preamp gain, whereas I measured with the preamp running flat out at 66dB — and that could easily explain this apparent discrepancy. Residual output noise measured -96dBu with the main fader closed, rising to -77dBu with everything routed to the main outputs; both figures are again slightly better than the published specs.

The channel pan pots are configured with 3dB attenuation at the centre, providing a consistent acoustic sound level as a source is panned across the full stereo width, but a 3dB rise at the centre for a mono–summed output. Phantom power measured within spec both when unloaded and fully loaded, and the mic preamp's input impedance measured a fairly typical 2.2kΩ.

Although my time with the desk was obviously limited, I was able to run some familiar audio tracks through the channels and test out the EQ and other facilities. Additionally, I was able to question Andrew about his experiences — both initially, and subsequently, after he had run a few commercial tracking projects through the desk.

The Trident 68 is a very easy desk to work with in the context of a tracking session, allowing zero-latency artist cue sends to be set up quickly using the auxes from live channels and monitor returns from the DAW, and the ability to flip the channel meters individually to show the direct send outputs or monitor return levels is very useful. Being able to move the entire EQ section from the channel path during tracking to the monitor return is also very convenient, and while the EQ has only a single parametric mid-band section, it is a very good-sounding EQ and one which is remarkably versatile.

I suspect most people will now use their DAW's plug-ins for corrective surgical EQ work anyway, but the console EQ certainly works very well for general musical shaping duties like paring the spectrum of one source to let another shine through, and the switchable Q options are also very helpful in that respect. I also suspect that having a single parametric mid-band will actually help many users focus on what they're trying to achieve and deliver workable results quicker and more easily than when working with a four-band EQ — it's a case where less really is more in my view (and it certainly worked very well for Mr Neve's early designs!). The adjustable high- and low-shelf bands also proved very versatile. In particular, I found the low band was almost Pultec-like in managing to add low-end weight without muddying up the mid-range.

Unfortunately I couldn't try out the mic preamps with any real live sources, but I did test them — they sound good, the noise level is very low, and it's clear that there's a decent amount of gain available. Andrew tells me that he thinks the mic preamps have a 'big' sound which he likes a lot, and he has achieved very good results with a wide range of dynamic and ribbon mics without any noise problems.

Naturally, at this price, the Trident 68 lacks some features of the more expensive models in the range, but the omissions seem to be well-judged and perfectly reasonable trade-offs given the cost savings. None of them impact on the sound quality of the console, and few have any significant effect on workflows: the Trident 68 is undoubtedly a very powerful and impressive console for the money.

When I reviewed the Trident 78, I liked it very much, and I found myself liking the Trident 68 for all the same reasons — it is a very nice console to work with and, importantly, it sounds very good. It also shares some of the same (minor) foibles as its siblings, but none that get in the way. Despite a completely different technology, the mic preamp of the Trident 68 sounds excellent and retains the generous headroom characteristics of its siblings, while the EQ, although again a different design, still sounds innately musical and brings that big Trident sound character to bear. If the budget can't quite stretch to an 88 or 78, there's a much better chance a 68 will be within reach — and without leaving you wishing you'd saved up a bit longer. The Trident 68 will definitely get the job done in a very pleasing and efficient way.

Clever design tweaks and economies have enabled Trident to offer most of the features and all the quality of the previous consoles at a remarkably affordable price.