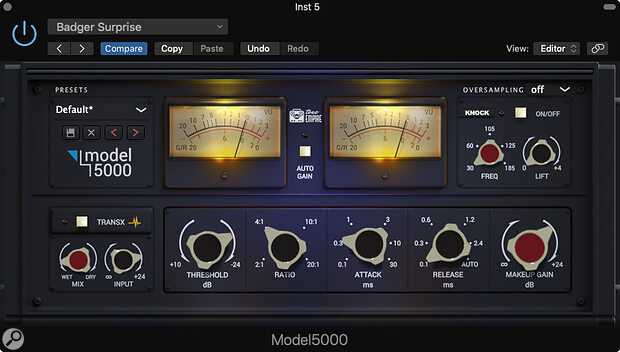 Described as a “punchy hybrid compressor with controllable Low End Thrusting”, the Model 5000 draws its inspiration from both the classic API and SSL hardware designs. Based on a VCA compressor topography, the Model 5000 has the same ratio, attack and release times as an SSL bus compressor but it’s augmented by something called Knock. Essentially, this is a software interpretation of API’s Thrust topography, a form of side-chain EQ that helps to deliver/retain low-end weight when compressing; certainly, the low end from this plug-in comes across as sounding very solid. There’s also a switchable TransX transformer emulation that adds a little coloration.

The result of this mix-and-match design is a versatile compressor that works on most sources, but I’ve found it especially useful as a drum and mix bus, and even a mastering compressor. At lower ratios, the compressor can be quite subtle but at more extreme settings it can sound very punchy and energetic — that’s a characteristic that can be exploited using the Mix control to blend in some of the dry sound, for instant parallel compression.

The GUI is laid out clearly, with large controls for Threshold, Ratio, Attack and Release time, and there’s also an auto release option. As per the SSL that inspired part of the design, the minimum ratio is 2:1. I’d have liked to see a 1.5:1 ratio — it’s something many SSL-alike hardware devices offer now and would make it more useful for mastering applications; in software there seems little excuse for limiting your options in this respect. Smaller controls to the left set the input Level and wet/dry Mix, with a TransX button just above. In the upper right-hand side is the Knock section, with switchable Frequency and a variable Lift of up to 4dB as well as on the Knock On/Off button. That just leaves Makeup gain plus the option of selecting an Auto Gain mode. Metering is via a pair of moving-coil style meters that follow the gain reduction.

Where CPU capacity permits, selecting one of the oversampling options at the top right of the GUI helps minimise distortion and ensures that peaks are read correctly; up to 8x oversampling is available. A number of useful presets are included and user presets can be saved too.

The result of this mix-and-match design is a versatile compressor that works on most sources, but I’ve found it especially useful as a drum and mix bus, and even a mastering compressor.

Sonically, Model 5000 has a lot in common with the UK half of its inspiration. It adds weight and coherence to submixes and beefing up drums in a flattering but not too obvious way by adding density and a sense of weight. That TransX transformer button adds a magical something to the sound, and most users will probably be tempted to leave it on. Though there’s no separate TransX control as such, the amount of saturation is dependent on the signal level, so the Input level control below it can be used to tailor its response. I found that a gentle application in a mastering situation added both a sense of ‘glue’ and gentle flattery that left me feeling something was missing when the compressor was bypassed. A more assertive application on drums helps ramp up the energy, but without making the sound seem over-processed.

In short, this is one of those compressors that the more you use it, the more things you’ll find it works well for.