Arranged as four sweepable bands and following the same general topography as Trident’s original channel EQ, the EQ section has upper and lower shelving sections plus two mid-range ‘bell curve’ filters. The upper-mid control covers a frequency range of 700Hz to 10kHz, with a filter bandwidth of roughly one octave, and the lower-mid covers 100Hz to 1.5kHz, and both mids have a gain range of ±15dB. The two shelving filters have the same gain range, and the HF one can be set between 1 and 15 kHz, and the LF between 40 and 650 Hz. All in all, then, there’s a useful degree of overlap between the different bands. Further buttons engage a third-order, 50Hz high-pass filter and place the insert pre or post the EQ section. A variable frequency high-pass filter might have been useful, as higher frequencies are sometimes needed to avoid mic popping, but there’s a limit to what you can put in a channel strip. There’s also an insert On button and an overall EQ bypass.

Given that the insert can be bypassed from the channel strip, I felt that on a console of this calibre, balanced insert sends and returns would have been preferable, on the basis that most (though by no means all) outboard gear is designed for balanced operation, so as to avoid the risk of ground loops. I gather that PMI have had similar feedback from some of their prospective customers, and they tell me that they may yet add balanced inserts in the future. In most cases, though, unbalanced connections at the insert point will work just fine, which goes some way to explaining the original design decision. 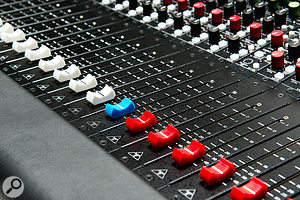 Coloured fader caps for different channel types, and the different coloured knobs for different sections of each channel, help to make navigation around the console a little more intuitive.Trident’s EQ is reputed to help create a big-sounding low end without making the lows sound indistinct or ‘wallowy’, and that’s certainly the case here. Bass synths, bass guitar and kick drums can be made to sound gratifyingly weighty without losing focus or tightness. The mids cover a generous range and the bandwidth seems to be a practical compromise, given that the EQ is not fully parametric. The ability to tune the high shelving control makes it very useful for adding ‘bite’ or ‘air’, while keeping those boosts well out of the way of the harsher ‘presence’ region. Overall, I’d probably describe the EQ as ‘workmanlike’, but I really don’t mean that in a disparaging way! Rather, I mean that it just gets on with the job in hand, doing exactly what you want of a channel EQ, with the minimum of fuss. In common with most high-quality EQ designs, you can apply it quite generously without incurring phasey artifacts, and everything retains a strong and pleasing sense of focus.

The console’s eight auxiliary sends are arranged as four mono plus two stereo sends, and each can be switched individually to pre or post fader. To maintain flexibility, Aux 1, Aux 2 and Aux 7/8 can be switched independently into either the main channel or monitor path as required. While the main channel EQ is a four-band, sweepable design, the monitor section has a simple Tilt EQ, with a pivot point around 650Hz. This EQ is flat in its centre position, so has no bypass option, but I found it extremely useful for simply brightening or darkening a sound and, being uncomplicated, it doesn’t seem to mess with the integrity of the sound. If that’s not enough for you, the two EQ sections can also be flipped to exchange positions as required. This ability to flip both the EQ and four of the sends means that a monitor mix can be run with effects and full EQ without needing to take over the main channel path.

When mixing down a completed recording, the usual way of in-line working is to use the main channel signal path fed from the channel Monitor Inputs for the recorded tracks, leaving the main inputs free to accommodate additional live sources, such as MIDI instruments being run in sync with the track. One of the beauties of this in-line-plus-group/monitor-channel topography is that you get plenty of usable inputs when you come to mixdown, as the group/monitor channels can be configured as additional inputs.

Below the Monitor Tilt EQ control are the pan and level controls for the monitor path. For soloing, the input channel has both PFL and AFL while the monitor path has AFL solo only. These affect only the monitor output and not the main outputs. Further buttons provide EQ to Monitor flipping and Mon Mute and, finally, there’s the main channel pan pot with Solo and Mute buttons alongside. Mute silences the channel signal and all its aux sends. Solo has a further button to select between AFL and PFL modes.

The master section occupies just one single-width module strip, and encompasses monitoring for up to three sets of speakers, each with separate level controls. Also in this section are controls for talkback, headphone outs with a front-panel mini-jack (headphones follow the Control Room selections), Aux masters with solos, 2-Track playback with mini-jack input, and test oscillator frequencies at 1 and 10 kHz. A master Solo level control is fitted, along with a master Solo LED that informs you when this facility is engaged. The talkback mic or test oscillators may be routed to the Aux pairs, the Groups or the Studio feed, which has its own level control and on/off switch, and is fed from either the left/right mix, a mono Aux 1 and 2 mix, or the stereo mix of Aux 7/8.

Monitor Mono and Mute buttons are provided and, as expected, these affect only the control-room Monitor Output, not the Main mix output. There’s no monitor Dim button here. It’s not exactly an essential, and PMI tell me they’re planning to add a dim facility in the future, but it’s worth being aware of if you’re one of those engineers who likes to set up a calibrated listening level — a Dim button helps make sure you return to it after answering the phone! In all other respects, the master section provides all the essentials and, thankfully, isn’t cluttered with unnecessary or confusing functions.

Each of the eight Group Monitor sections kicks off with a 12-segment, peak reading meter. The metering and signal source can be switched between the Group or Monitor Return jacks, providing the option for more line inputs at mixdown, as I alluded to earlier. An Aux To Mtr switch overrides the above meter routing and sets the meter to monitor the associated Aux Output post the Aux Master Level control on the master module, so it provides an easy way to confirm whether the aux outputs are carrying appropriate levels of signal.

The master effects controls are also located in this strip. A control sets the balance of the stereo Effects Return signal fed to the Aux 7 and Aux 8 buses, providing a straightforward way to add effects to your monitor mixes. These are followed by an FX To Aux level control and pre/post switching, so the source can be selected pre or post this level control. The effects returns also benefit from a switchable Baxandall-style two-band EQ at 12kHz and 80Hz, and this has a bypass button. This type of EQ has a very natural sound and is often all you need for bus EQ, or for fine-tuning an external input. The stereo effects return section has both balance and level controls. 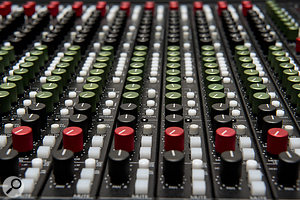 The Groups also include sends to the eight aux buses: sends one to four have individual pre/post switching, while the remaining two stereo sends are pre/post-switchable with pan controls. Baxandall-style two-band shelving equalisers (12kHz and 80Hz) are again made available for the Group signal, and there are Monitor Pan and Monitor Level controls below. AFL solo and Mute buttons are available on all Groups. A Fader Reverse button swaps the Monitor level control with the Group fader control, though the solo and mute functions stay as they were.

In common with most well-designed analogue mixers, the experience of mixing on the Trident 88 is very different from mixing in the box, but it’s not only because of the physicality of the controls. There’s seemingly something more ‘solid’ and well-integrated about the sound too. Instruments and voices seem easier to balance than when mixing ‘in the box’, as they seem somehow to have less of a tendency to get lost in the mix. Having an effective ‘hands on’ analogue equaliser in each channel also makes a big difference. I really like the EQ because it doesn’t have so much character that it becomes a one-trick pony, yet it still adds a sense of finesse and focus to the sound, even with relatively small adjustments.

The preamps are also quiet and suitably transparent, with headroom enough to permit creative overdriving before anything too nasty sets in. I would have liked to have heard the transformer-coupled versions — given the relatively small cost involved it would probably be worth getting at least a couple of input channels fitted out with them, just to offer you a choice of preamp characters.

It’s also worth reiterating that even this smallest model has a large number of inputs available when you come to mix, and all have access to some type of EQ. Even the channel design offers a larger than usual choice of inputs if you take the Mic Insert into account.

For the serious studio owner wanting to marry the traditional analogue console tracking and mixing paradigm to a software DAW-based recording system, the Trident 88 has much to commend it, though of course it is equally well-suited to those still choosing analogue tape or digital multitrack devices as their recording format.

Clearly, the Trident 88 is far from being a budget mixer, but a two-year warranty comes as standard (this is upgraded to three years once the console is registered) and it still manages to be more affordable than much of its real competition — its new price is about that of some second-hand competitors — while also outgunning most of them on features. Of course, much of this console’s appeal is also due to the Trident sound and heritage — and that’s something that this range of mixers upholds with style.

API’s The Box is an obvious competitor to this smallest Trident 88. Audient, Harrison and Rupert Neve Designs, among others, also build highly respected small consoles. SSL’s XL Console includes 500-series integration, as does Ocean Audio’s Ark. The lower-cost Toft ATB series is not engineered in the same modular way, but its circuitry is ‘Trident inspired’. Allen & Heath offer the more affordable ZED-R16 and larger GSR24, which is also available with fader automation.

Specifications At A Glance

Base prices are as set out in this table. Models with higher input-channel counts are available to special order. LL1538 Lundahl input transformers may be included at a cost of $150 per input channel, and LL1517 Lundahl group/output transformers for $200 per channel, and spare channels may also be purchased. Automated faders will be sold in banks of eight but pricing was not available when going to press.

Base prices are as set out in this table. Models with higher input-channel counts are available to special order. LL1538 Lundahl input transformers may be included at a cost of £99 per input channel, and LL1517 Lundahl group/output transformers for £99 per channel, and spare channels may also be purchased. Automated faders will be sold in banks of eight but pricing was not available when going to press.

Prices include a large wooden shipping crate, but exclude shipping and VAT.

PMI Audio have succeeded in updating the original Trident concept to meet the needs of the modern studio.