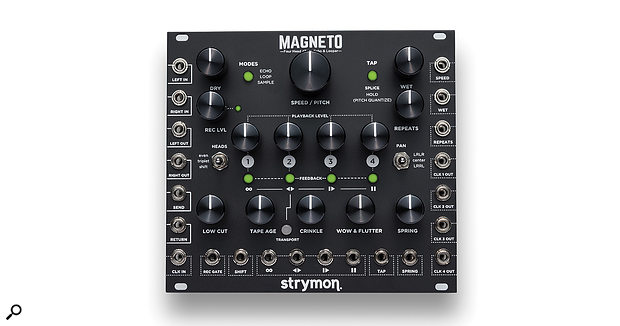 Strymon’s effect pedals are revered for their high quality and for that certain intangible something — musicality. It’s not surprising, therefore, that rumours of Eurorack versions generated a degree of anticipation. The first module released into the wild is Magneto, an echo machine based on tape simulation, with four playback heads, phrase sampling, looping and a lush spring reverb. While Magneto is entirely digital under the covers, its behaviour is anything but. Spin the large Speed/Pitch knob and the impression of an analogue delay is unmistakable.

From the smooth and trusty knobs to the clear, unambiguous panel, this is a module to touch, tweak and interact with. Very little multi-functionality is present and where it does crop up, the user interface is carefully primed to assist. For example, the transport controls double up as feedback switches for each playback head. A dedicated button toggles the behaviour and changes the switches’ colour to ensure maximum clarity.

Starting with the first mode, Echo, I was pleased that space was found for Wet and Dry mix controls, along with a record level knob, its range taking the input signal from clean through to heavy saturation. The end result is a great deal of flexibility, whether Magneto is paired with a single instrument or used as a send/return effect. If you crank the Repeats towards the maximum, the tape-style regeneration becomes a sweet source of drones.

Magneto is a stereo effect, in the sense that the quartet of tape heads can be panned freely, with several preset configurations instantly available from a switch. If you prefer to work in mono, a connection to the left input will be sent to both outputs.

Having control over each head’s feedback, panning and level is pretty cool — and you can set the spacing too, in musically useful values. The first of these is ‘Even’, placing the heads at 1/16th, 1/8th, dotted-8th and quarter-note intervals. Triplets come next, then there’s a more unusual option, ‘Shift’. This turns the playback heads into pitch-shifted delays, featuring octaves up and down, an octave plus a fifth and finally a plain quarter note delay. Sadly these intervals aren’t user-programmable.

The longest delay time is an impressive two minutes and even at the highest fidelity (ie. the fastest tape speed), you still get a healthy 15 seconds. Tap tempo is the mechanism for setting the time of head four (the rest fall in line automatically) and if you don’t enjoy hitting small buttons, a generated trigger signal at the tap input will do the job nicely.

As well as tape speed, the quality of playback is determined by the Tape Mechanics section — one of the few areas with no CV control. Low Cut sweeps between low-end boost and a brighter, high-pass response. Tape Age progressively lowers the quality and frequency response, turning a pristine tape warmer and duller. Crinkle adds tape imperfections, the extremes of which get pretty wonky at slow speeds. Finally, Wow & Flutter resurrects the pitch instabilities of elderly cassette tapes — a smattering of this is ideal for Boards Of Canada homages.

The last sound modifier is a spring reverb simulation — and it’s a corker! I’d rate it as more generally useable than any real spring I’ve owned. Positioned after the echo heads in the signal path, its level is CV-controllable but there are no other parameters to tweak.

The delay is so beguiling you might initially overlook the other two modes. The Sound On Sound looper puzzled me at first, until I checked the manual and realised it only works when head four’s feedback is engaged. This, it turns out, is the looper playback head; the other three provide delayed repeats as usual, their values carried over from the previous mode. Using the looper involves pressing the tap button — once to start recording, again to initiate playback and finally to clear the loop. The Pitch knob shifts the pitch and speed of playback and the Repeats knob sets the loop’s decay time, with high settings keeping it going forever.

The tap button (or input) is also in demand in the next mode, Phrase Sampling, with the transport section providing additional playback options. Actually, the transport controls are fun in all modes; they offer a means of reversing the current playback, or pausing it (as if you grabbed the tape reel). While paused you can scrub the audio manually with the Speed/Pitch knob. The transport provides a restart function for the recorded phrase and if you wish to loop it repeatedly, this is achieved by patching head four’s clock output into the restart CV. Lastly, ‘infinity’ lifts the record head, allowing either the current delay cycle or loop to play continuously.

If you enable Pitch Quantise, the Speed/Pitch knob is restricted to specific intervals, within a selection of 15 scales. The scales are chosen by holding the Transport button and turning the large knob — you’ll need the manual handy to translate the patterns of amber LEDs into the scale you want. The Speed CV input responds to 1V/oct changes over -3V to +3V, but the scales are constricted to a maximum of two octaves.

The CV and clock I/O jacks curve around the module like a square horse shoe, leaving the controls free of obstruction. Some of the included patching examples are well worth trying, eg. you can obtain a snappy sub octave from tape head three by connecting a gate signal to the restart CV when in Shift mode. It’s quite a treat to have every head’s clock output available.

Early in my adventures I managed to hang the module (when playing around in looper mode). Having done so, I embarked on the small adventure of updating the firmware. This requires that you remove the module from your case and locate its mini-USB port. Next a firm sideways insertion of the cable is required. Please take extra care not to be a ham-fisted troglodyte like I was — then you can hopefully avoid slipping and sheering off a capacitor.

Magneto is a substantial module that costs rather more than a stand-alone guitar pedal. It handles well for live performance, its pitch-shifting delays are fun and the feedback drones feel more organic than a typical digital delay. I found the long delay times to be particularly useful and the looping and phrase sampling modes were simple but effective. With that lush spring reverb always available too, Magneto could add magic fairy dust to any system.