Twenty years ago I was working on Music Row in Nashville and, one evening, wandered into Tower Records to kill an hour or two. While browsing, I discovered a book called Vintage Synthesizers, compiled by Mark Vail in large part from his and other authors’ articles published in the American Keyboard magazine. It was superb, and I immediately bought two copies — one for myself, and another for fellow SOS contributor Nick Magnus. Years later, I also bought Vail’s Beauty In The B, which proved to be a superb reference for anyone interested in Hammond organs. I was therefore excited to hear that his latest volume was to be subtitled A Comprehensive Guide To Understanding, Playing and Recording the Ultimate Electronic Music Instrument, and eagerly awaited its arrival. 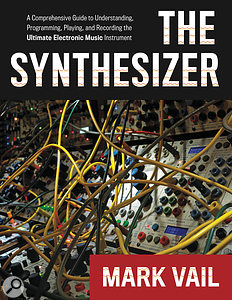 Available in hardback, paperback and Kindle formats, The Synthesizer (Oxford University Press; ISBN 978–0–19–539481–8) extends to more than 400 pages, almost all of which include photographs and illustrations. However, it’s not a coffee-table book; a conscious decision was made to publish it as an affordable textbook, so the paper is lighter than I’d expected, a tad hygroscopic (it crinkles slightly), and there isn’t a colour photo anywhere within. What’s more, the reprinting of the photos (some of which have been published elsewhere and appear to have been scanned from existing prints) is not always of the highest quality. But there may have been no other way to bring such a tome to the market; just bear in mind that if you’re expecting something that looks and feels like Matthias Becker’s two volumes of Synthesizer Von Gestern you’ll be disappointed.

Turning to the content, there’s a frightening amount of information here. Indeed, the first section, ‘Trendsetting All–Stars’ could probably have been formatted as a book in its own right. This is followed by sections on ‘Acoustics & Synthesis Basics’, ‘Choosing Your Synthesizer(s)’, ‘Composition, Programming And Performance Techniques’, and ‘Recording The Synthesizer’.

Nevertheless, the book’s subtitle is slightly misleading; none of this constitutes a ‘How to’ guide. I’m happy with this; there are innumerable third–party instruction manuals available, many of great length and detail, and this doesn’t need to be ‘training manual light’.

As I read The Synthesizer, it became clear that it has been written from a particularly American (and possibly West Coast) perspective. For example, there is a large amount of space devoted to Buchla, who was no doubt a pioneer, but not of great importance in the development of electronic music on this side of the Pond, whereas (unless I’ve missed something) RSF, Elka, Jen, Siel, Soviet manufacturers such as Aelita, Estradin, and Formanta, and even Kawai score a grand total of no mentions between the lot of them. Likewise, I doubt that many European readers will have heard of LA musician Starr Parodi, who warrants numerous mentions and photographs, whereas (for example) Richard James scores zero. Perversely, this makes The Synthesizer even more fascinating (if less all–encompassing) than it might otherwise be.

Inevitably, in a work of this size, there is a tiny handful of errors but these shouldn’t detract. The Synthesizer is a significant work that will prove to be an absorbing read for many synth enthusiasts, and especially for newcomers to our field.