Is a high‑quality valve preamp in a programmable pedal just what the SpinDoctor ordered? 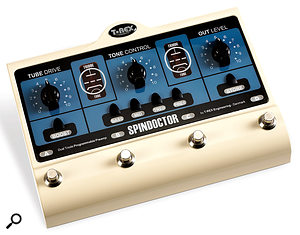 Danish company T‑Rex build some very nice guitar effects pedals, but the SpinDoctor that I'm reviewing here must surely be one of their most ambitious. Although it looks rather like an oversized stomp box, it's actually a fully programmable valve guitar preamplifier, complete with four‑band EQ, variable overdrive and motorised controls. The device can store four sets of settings, each set accessed by its own dedicated footswitch. More are available if you hook it up to an external MIDI controller. As soon as you select a stored channel the gain and output knobs turn to reflect the new settings, so that you know exactly what you're getting. The Tone knob stays put until you select which EQ band it is addressing, then it jumps to the correct position. It is built like a tank, too, with everything housed in a 3kg cast‑metal box, which measures 255 x 186 x 65mm.

Despite all the electronic sophistication, the SpinDoctor's user interface is actually very straightforward and intuitive. There are three chicken‑head-pointer knobs, six buttons and four 'channel' footswitches on the top panel. Each switch has an associated blue backlit logo that turns red when active; if an external MIDI controller is used to select a channel number higher than four, all four light up red. Hitting a channel footswitch a second time bypasses the processor.

Two transparent windows, overprinted with the schematic representation of a triode valve, allow the glow of the two 12AX7 valves to be seen during operation. Power comes from an external adaptor, the consumer‑style push‑in connector of which is the only part of the kit that isn't thoroughly 'professional'. A 'Caution, High Voltage' sticker on the bottom of the case suggests the PSU voltage is multiplied internally to produce a valve HT (high‑tension) voltage that's more comparable with that of a traditional mains‑powered valve amp than with the low‑voltage, 'starved‑plate' circuits common in cheaper valve pedals.

The control section starts on the left, with a variable valve drive section that's controlled by the Drive knob and a Boost switch. Using these two controls in combination, the overdrive range goes from clean, via subtle overdrive, to heavy rock distortion. At its simplest, the SpinDoctor can be used in the same way as a conventional distortion pedal, but when you start tinkering with the Tone controls, you'll find that it also offers a very flexible amp EQ section, with buttons for Bass, Mid, Treble and Presence. To adjust one of the bands, you hit the appropriate button and then turn the Tone knob.

At the right is another knob to set the output level, and a Store button for saving settings into the currently selected patch memory (A, B, C or D), or to the program number sent by an external MIDI controller. If any knob or switch is adjusted, the Save light goes from blue to red to show that changes have been made — and that they must be stored if they are not to be lost.

In addition to the expected jack output for feeding an amplifier, a speaker-emulated output is available for DI recording, or direct connection to a PA system. As I hinted earlier, there's also provision for MIDI control, which comes via a standard MIDI In DIN socket on the rear panel: this allows up to 127 patches to be saved and recalled using an external MIDI controller or sequencer. The brief manual informs us that for details of MIDI control we should refer to the manual that comes with the controlling device or software. After a little experimentation, the system proved to be extremely simple: using an external device capable of sending MIDI Program Changes, you simply send a program number between 1 and 127, adjust the controls on the SpinDoctor and then press Save. Whenever that program number is received in future, the settings you saved will be recalled.

On the rear panel you can see the MIDI In socket, which helps to make this pedal much more versatile than most.

The SpinDoctor can be plugged into the front end of a standard guitar amp, or it can take the place of the preamp, running directly into an amp's power stage — for example, via the return socket of an effects loop. To ensure that the signal isn't too hot for a guitar‑amp input, a recessed button on the base of the unit allows the line output level to be dropped to instrument level when required. At the same time, when used live, the speaker-emulated output can be used to feed the house PA to save having to mic up the amp. Similarly, in the studio, the speaker‑emulated output can be plugged directly into the line‑level input of a recording system. Rear‑panel Level and Frequency knobs are used to adjust the volume and change the tonal character of the emulated speaker output. When not being adjusted, these two knobs can be pushed into the rear panel to prevent accidental adjustment or damage — which is a nice touch.

So far, the concept looks like the perfect balance of flexibility and simplicity — but when you consider that you could buy a capable valve amp for rather less than the cost of this pedal, it really needs to deliver something pretty special.

Having compared the results with my other overdrive pedals, I think it is fair to say that it does. I got great results feeding it into my standard guitar amp, set up to produce a clean, Fender‑like sound, essentially using the SpinDoctor as an elaborate overdrive with EQ. The range does indeed go from totally clean to hard rock, but it doesn't stray as far as metal, at least not unless you have a guitar with powerful humbuckers.

Tested first with single‑coil pickups, the SpinDoctor managed a wonderfully smooth and punchy blues tone, reminiscent of some of the early Peter Green work, where he coaxed a fairly bright sound out of his humbucker‑equipped Les Paul. There was real weight at the low end, which my solid‑state pedals couldn't match, balanced by a well‑defined high end that cut though perfectly, with no hint of fizziness. Winding up the gain got me into the kind of overdrive used by the likes of Free and the Who, where none of the definition seems to get lost when you pile on the drive, and the low end still kicks. Chords took on a nice low‑mid throatiness, which didn't get lost when I switched in the boost and moved towards the higher end of the overdrive range.

The tone was predictably warmer and thicker when using a guitar with humbuckers, but there was plenty of tonal range to stop things getting muddy, and once again there was good note definition.

The speaker-emulated output provided a well‑behaved signal with a commendable lack of high‑end fizz. However, being critical, I felt that it lacked the sense of weight that you get when going through a guitar amp, and cleaner sounds, while perfectly playable, lacked the springiness and vibrancy of the 'SpinDoctor plus amp' experience. You can get some perfectly usable results from the DI, though, using the Frequency knob for a little light‑to‑dark adjustment, and the signal is certainly good enough to feed to a house PA — but for serious recording, I'd still choose to mic the amp where possible, both for the final sound and to improve the playing experience.

The SpinDoctor produces very convincing 'old‑school' overdrive, even when fed into a solid‑state power stage, and the motorised controls make operation very visual and very simple. Whether you use it as a preamp or just as an overdrive in front of your usual amp, the EQ section provides a welcome degree of adjustment, and although the direct output isn't quite as magical as the sound of the SpinDoctor played through a good amp, it works perfectly well in delivering a polished sound with no nasty fizz at the high end. It may not have the flexibility of modelling devices that are able to impersonate a wide range of amps, but the sounds you can coax from the SpinDoctor are much more 'the real deal'. Having the ability to save additional patches when a MIDI controller is connected is useful too. Indeed, the only negative thing I can find to say about this device is the use of a flimsy push‑in power‑supply connector — which won't be a problem at all if your pedal is mounted on a pedalboard.

The rotary controls are a necessity rather than a luxury, as this pedal uses all analogue circuitry in the audio path: the only way you can store settings without introducing additional components that might degrade the sound is to store the physical control positions. Of course, it adds a bit of visual flair too, and makes editing settings as simple as on a traditional valve combo.

Clearly, the SpinDoctor isn't for everybody, as it comes with a hefty price tag for a pedal, but if you need traditional, high‑quality valve tones, yet you also need the flexibility to switch between multiple channels, the SpinDoctor should do the job beautifully, whether you're on stage or in the studio.

No pedal I've tried sounds better, and those that come closest tend not to be programmable: the nearest non‑programmable equivalent is probably the Mesa Boogie V Twin.

The SpinDoctor offers the kind of tonal range you'd expect from a boutique valve amp, but with the convenience of a programmable pedal. If you can't find your sound any other way it's worth every penny, but this kind of quality costs.