Tascam's mid‑range pocket‑sized digital recorder, the DR2D, supersedes the earlier DR1 — but does it have enough tricks to compete in an ever-evolving market? 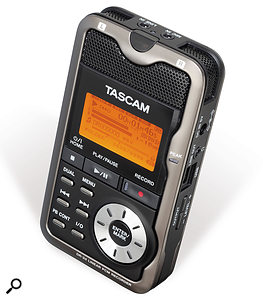 The DR2d and its limited-edition pearlescent sibling, the DR2dw, are very much a step on from the DR1 I reviewed in SOS July 2008. That was one of the first generation of affordable digital recorders designed to fit into a pocket and record high‑quality audio to solid-state media. The DR1 had some great features, but it lacked a few important ones, the most obvious of which was an on‑board speaker for checking audio recordings and files. Tascam have had time to evaluate the DR1's pros and cons relative to the competition, so my expectations of the DR2 were much higher.

The thing that really set the original DR1 apart was the iPod‑style scroll wheel, which was great for whipping through menus or song files, just like a dedicated MP3 player, and Tascam have wisely retained this feature. The screen menus and a number of the buttons are also similar. The casing is about a centimetre shorter, however, and not quite as wide, which results in a much tidier, more refined design.

But perhaps the key selling point of the DR2 is its ability to record two signals simultaneously, using a 'Dual' recording mode in which an alternative 'safe copy' recording is made anywhere from ‑6 to ‑12db down from the original. This is potentially very useful, and is sure to generate some interest, but the two other 'Dual' settings are arguably more intriguing. The first makes it possible to mix a mic signal with the line input to create a single file, and the second captures them both as separate files, just like a multitrack recorder. In this respect, Tascam are taking on Zoom's H4N, which has a four‑track recording mode. The DR2 also makes it possible to overdub an input signal onto a pre‑recorded file, be it an MP3 or WAV. This latter feature is something the DR1 could do, but Tascam have slightly altered its implementation.

The new model includes the small speaker that its predecessor lacked, located on the underside, with its own on/off button. Similarly, the DR1 lacked an integral screw thread for stand mounting, relying instead on an adaptor kit, so Tascam have added a thread, placing it near the speaker's switch.

Most of the DR2D's controls are located on the two side panels.One really nice addition to the standard kit is a wireless remote with a seven‑metre range, matching that of Yamaha's similarly‑priced W24 recorder. The slimline control is powered by a CR2025 lithium battery and includes transport and input-level controls, plus a Marker button. Tascam are clearly thinking of bands recording themselves from the stage, because the remote sends its beam to a sensor mounted at the front of the recorder near the mics, where a second record indicator LED is visible. This light flashes in record-ready mode and stays red when recording. The DR2's record button lights in the same way, of course, and by using that as visual feedback, you could do remote operation from a front‑of‑house position too.

The new design dispenses with the DR1's bespoke battery, which could be recharged over USB: instead, the DR2 uses a pair of standard AA batteries. Although in the long run these will work out more expensive for the user, at least they're readily available and will be easy to replace in the field.

A further significant update is the addition of a 96kHz recording option (although note that there's no 88.2kHz setting); the DR1's maximum sample rate was 48kHz.

The remote control is a handy addition, and even makes it possible to control front‑of‑house recording from the stage!

Not all of the alterations Tascam have made can be identified as definite improvements, however. The screen, for example, is marginally smaller than it was on the DR1, which obviously doesn't improve usability, although it does remain relatively large for this type of device, and still comfortably accommodates level meters, song position and file data, and general setup and system information.

The on‑board mics of the DR1 could be incrementally turned 90 degrees to face vertically whereas those of the DR2 are fixed and can't be angled. While this might seem a retrogressive step, it is merely because the new setup is omnidirectional.

Other minor alterations include the shifting around of things like the hold button, DC power-adaptor input, USB socket and a few buttons, although these changes neither improve or hamper usability, in my opinion.

As for buttons, Tascam have removed the dedicated input settings button, shifting its options into the menu button list. Also gone is the mix-balance control, used for changing the relative levels of a playback file and input source when overdubbing. This time around, the setting is done using arrow keys and an on‑screen pop‑up volume scale, but this is pretty straightforward.

Tascam have kept the six‑option reverb processor, which can be inserted into the input path or applied to playback, even though it has also lost its button and has been relegated to the menu list. Retaining their button, however, are the playback control features, which allow the pitch of a file to be altered without affecting its speed (and vice versa), and also provide a means of cancelling out centrally panned material within certain user‑definable ranges to leave the backing — all of which is designed to help soloists and guitarists who want to prepare practice material.

The only input that's conspicuously absent is the quarter‑inch jack socket, which was found on the edge of the DR1 nearest the operator, and was intended for non‑powered mono inputs from dynamic microphones. However, the mini‑jack mic input (supplying plug‑in power), and line input, are both the same as before, and are found on the front edge between the on-board mics.

Of the pocket‑sized stereo recorders I've reviewed recently, the DR2 is one of the nicest to handle, feeling pretty solid and possessing a look that inspires confidence. In terms of size, styling and feel, there are similarities with Sony's PCM M10, which steered clear of fancy features but performed really well. Tascam have aimed for similar ground, but couldn't resist including one or two ideas taken from their multitrack recorders.

Control-wise, the functionality is fairly straightforward, although there are quite a few menus that make the setting up of things like overdub recording unnecessarily complicated. As for recording, background noise is far less prominent than that on Tascam's budget DR08. In fact, it is barely noticeable, even at the highest gain settings. Handling noise is also very low, and in that respect it performs far better than the DR1. The casing is made so well that it can't be made to creak when pressed hard, and the buttons are designed in such a way that they make very little noise for the mics to pick up. Nevertheless, Tascam must have done some clever engineering to stop eardrum‑busting bumps and vibrations reaching the capsules in the way they seem to on many recorders.

Recordings made using the on‑board mics sound very clear and detailed, if lacking in a little warmth as a result. The mics' omnidirectional polar patterns mean that the DR2 can be turned so that its screen is facing directly away from the subject and the result is the same as if it were facing the other way. Obviously, this is great for capturing ensemble performances where musicians are scattered around a room, particularly as the 3D imaging is very clear. On the down side, the mics can't be adjusted into an X/Y formation if a more focused stereo field is required.

In refining the DR1 to produce the DR2d, Tascam have both added and taken away. Fortunately, nothing too precious is missing: the quarter‑inch jack input found on the DR1, which was useful for connecting dynamic mics, may be missed; but while guitarists might be disappointed that there aren't more specific facilities for them — such as a high‑impedance jack input, tuner, or any signal processing — there is, at least, a metronome, and the playback control features are useful when jamming or practising.

Having 96kHz recording, the on‑board speaker, a wireless remote control, a screw thread for stand mounting, and the ability to mix‑record different inputs makes the DR2 a serious contender in the handheld‑recorder market. Less obvious improvements, such as the significant reduction in handling noise, are also very important. The DR2 packs enough punch to compete with the best in its price range, and makes the decisions that prospective buyers have to make even harder.

Price-wise, the DR2 sits halfway between its main competitors, the Yamaha W24 and Zoom H4N. On paper, at least, Zoom's feature list looks almost unassailable, with its adjustable mics, XLR inputs, physical modeling processor and 4‑track mixer, but it lacks the remote facility of the other two (a wired one is an optional extra) and doesn't have a scroll wheel like the DR2. The W24 is the smallest and lightest of the three, but is not so solidly built. Other products at a similar price point include Edirol's R09HR and the Olympus LS11.

Tascam are very prolific when it comes to the manufacture and release of hardware recording products, and cater for very high-end studio and broadcast applications, as well as semi‑pro home and live recording. In terms of portable, pocket‑sized stereo recorders, their range started with the DR1, which hit the market together with a guitar‑tailored sibling called the GTR1. At about the same time, they released the DR100, which was aimed at the professional end of the market, and came with a specification and price to match. In between these and the DR2d and DR2dw, came the DR7, which seemed to have a very similar feature set to that of the DR1, albeit with a simplified set of controls and a slightly more slimline case. The latest releases also include the DR8, which is a much more compact design than any of the above, and boasts extremely adjustable mics.

A significant step up from the DR1, this model is smaller and has many improved features. It lacks one or two good ideas tried out by the competition, but nevertheless has plenty of its own to offer.