TC Electronic have created a Pro Tools HD plug–in that can measure the loudness of programme material and its suitability for different playback systems. 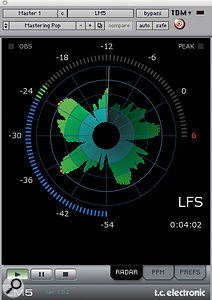 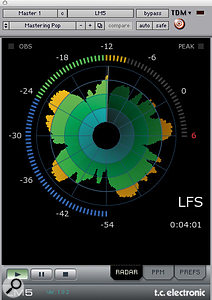 The same programme material before (left) and after mastering. Peak levels are the same, but the mastered version is louder overall, as well as being more consistent in terms of loudness.I am sure that we have all complained at some point about how loud the adverts are on TV compared with the drama or documentary they are placed in. Most of you will have realised that the adverts have been processed with various compression techniques to improve their perceived loudness, with the desired effect of having that ad 'stand out' from the rest. All broadcast content, both programmes and adverts, has the same maximum peak signal level, but that doesn't stop some of it being subjectively louder than the rest.

However, creating a meter that will measure loudness has always been difficult, as loudness is a subjective assessment in which sound pressure level, frequency content and duration are all important factors. This has made it difficult to quantify, and a meaningful generic loudness measurement is possible only through large–scale subjective tests on a number of subjects. In 2004, McGill University, in conjunction with TC Electronic, undertook such tests, while the International Telecommunication Union (ITU) have been investigating 'Audio Metering Characteristics suitable for use in Digital Sound Production' for the last six years or so. As a result of several rounds of trials, listening tests and review, a draft standard called ITU–R BS.1770 was drawn up, and we are starting to see a number of loudness meters coming onto the market supporting that standard. One of these meters is a Pro Tools TDM plug–in: the LM5 Radar Meter from TC Electronic.

In order to be able to judge loudness consistency over time, any meter is going to need some form of histogram as part of its display, as well as an instantaneous loudness indicator and a conventional peak meter. TC Electronics have resolved these requirements with a graphical interface that works like an aircraft radar system, with a rotating cursor that leaves a trace behind to show the loudness history. The use of a radar–type display is an inspired piece of design, and the colour coding means that a quick glance at the display will show not only the instantaneous loudness and historical loudness but also the consistency of loudness through the track or programme. Consistency is easy to judge: you look at the height of the 'hills' and 'valleys' in the display.

The two screens, left, show the same mixed track. The one on the left is the track as I mixed it, and clearly has a wide dynamic range but is relatively quiet. The second screen shows the mastered version, and you will be able to see two major differences. The first is that the whole track is louder: this is significant, especially when you realise that I had normalised the original mix so both files have the same maximum peak level of –0.01dBfs. The second difference is that the distance between the 'hills' and the 'valleys' is much less, so the second version can be described as more 'consistent'. 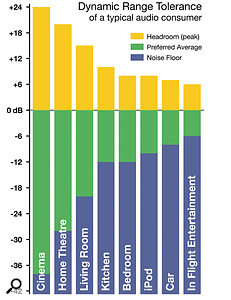 TC's graph showing listeners' tolerance of dynamic range in a variety of playback environments.Consistency in volume has come to matter a lot in the digital world where it is technically possible to deliver wide dynamic range content, but there is arguably little point in doing so if the available dynamic range of the consumer's listening environment is restricted. TC's research has shown that consumers have a distinct 'dynamic range tolerance' (DRT) which is specific to their listening environment, as the graph above shows. The DRT is defined as a Preferred Average window, with a certain peak level headroom above it. The average sound pressure level, which obviously is different from one listening condition to another, has to be kept within certain boundaries in order to maintain speech intelligibility, and to avoid music or effects from becoming annoyingly loud or soft.

As audio engineers we instinctively target a certain DRT profile when mixing, but because level normalisation in broadcast and music production is based on peak level measures, material with low dynamic–range signatures ends up the loudest. Audio production can therefore be trapped in a downward spiral, going for loudness at the cost of ever–decreasing dynamic range.

In line with this research, you can use the Preferences page to set up LM5 to suit a variety of playback systems, and it colour–codes its loudness information to help identify a target level range (green), levels that are below the noise floor of the listening system (blue), and loud events (yellow). A selection of factory presets covers a number of common applications, such as pop mastering, as well as EBU and NAB settings, and you can also create your own presets. The scale of the radar meter can be set to either 'Loudness Units, LU' or 'Loudness Full Scale, LFS', while the '0 LU Equals' parameter sets the loudness required to obtain a 12 o'clock reading on the outer ring. This is the same as the border between green and yellow on the Radar page, while 'Low Level Below' determines where the display will change between green and blue, indicating levels at risk of being lost below the end user's listening environment noise floor.

The outer ring of the LM5 Radar display is the Current Loudness indicator, which shows an instantaneous reading of loudness at the present time, with the 12 o'clock position representing 0LU, and the trace is colour–coded to show where in the DRT the loudness is sitting.

The radar display inside the ring shows a loudness 'landscape' that is designed to let you judge whether loudness emphasis is put where it is required. In film, are dialogue segments balanced against action scenes, or music segments? In music, does the chorus of a song have a push against the verse? In TV is the audience too loud in a game show? All are questions that are designed to be answered by the LM5 radar display.

The duration of one radar revolution can be set between one minute and 24 hours, with reference either to the real–time clock of the computer or Programme Time, which starts when you press the Play button on the Radar or PPM pages. You can set the loudness scale to 3, 4, 6, 8, 10 or 12 dB between each concentric circle. The 0LU point is always marked as the border between green and yellow at the bold concentric circle. Transport controls in the bottom left–hand corner are used to run, pause, stop and reset the radar. The OBS indicator lights to show certain inter–channel anomalies, and if it lights TC recommend the user checks the PPM page to see what might be causing the anomaly. The Peak indicator shows that at least one channel is exceeding its true–peak maximum. 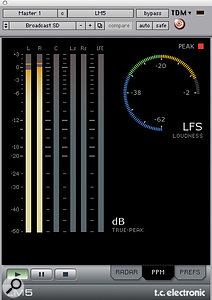 LM5 also offers 'true peak' metering, which can predict cases where the reconstructed audio signal will clip the D–A converter, even though no individual sample hits 0dBfs.The PPM page is a 'true peak' level meter, which can be used to visually monitor the balance between channels and their headroom. It shows conventional bar–graph signal PPM meters on the left side, with a round Current Loudness display, identical to the outer ring of the Radar page, on the right–hand side. The peak meters display true–peak level as specified in ITU–R BS.1770. True–peak meters are designed to give a better indication of headroom and show the risk of distortion in downstream equipment such as sample–rate converters, data-reduction systems and consumer electronics.

What the true–peak meter is displaying is what will happen when the samples are converted back into the analogue domain: it is possible that although no one individual sample goes above 0dBfs, a pattern of samples could produce an analogue waveform that will exceed the 0dBfs point and so potentially cause distortion, especially in consumer equipment. TC Electronic recommend that for data–reduced delivery via compressed formats like MP3, –3dBFS should be regarded as maximum level. For more information, the TC Electronic web site features a Tech Library where you can download some very informative articles.

At the time of writing this review I had two TV documentaries to mix, and I found LM5 invaluable. At first, while editing and setting levels, I had the Radar set to one minute per revolution so I would get relatively quick feedback as to the relative loudness of each clip. When it was time for the final mix, I changed the Radar speed to one revolution per four minutes, and found it ideal to keep a check on the loudness consistency throughout the programme.

In both cases, it was very useful indeed, but it's important not to allow your decisions to be completely controlled by LM5 — or any meter, for that matter. These devices should be considered as tools to help produce a better sound. Don't forget the best arbiters of what sounds right are the two devices we have bolted to the sides of our heads!

Overall, this plug–in is an excellent piece of technical and interface design and is long overdue. The radar–style meter is inspired and makes the plug–in so easy to use, with the colour–coding of both the outer loudness ring and the histogram radar section meaning that you don't need to clog the display with loads of numbers. To know that the loudness rating is based on large–scale trials by both TC and McGill University is very reassuring. It would be great not only for use in the broadcast audio sector but in mixing music, to help show which parts of a song are louder. LM5 isn't only useful for producing loud mixes: it also helps you to produce mixes with a wide dynamic range safely and reliably. Finally, for mastering, it would be invaluable in attaining a consistent loudness thoughout an album project.

A very well-designed plug–in that is useful in a wide range of circumstances and projects, both for post–production and music mixing.