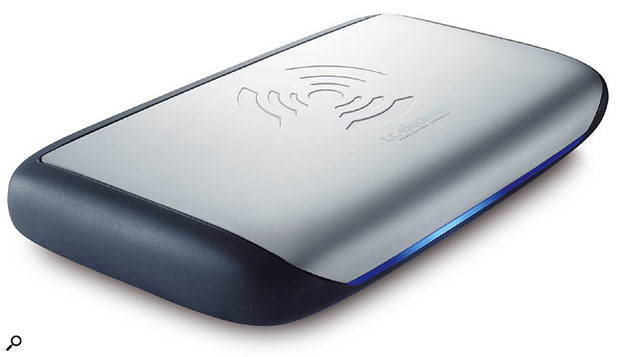 The latest addition to TC's Powercore range offers the convenience of Firewire connection at a bargain price, with some serious new plug-ins included.

DSP-powered gizmos that add functionality to music computers come and go, but two big names have carved a sizeable niche in that market: Universal Audio's UAD1 PCI card and TC's Powercore range. The reason for the continued success of both these products is that they come bundled with superb plug-ins, and in a world where even the fastest computer is never fast enough, they add useful functionality to an existing system. Until now, TC's range comprised a PCI card, now sold as part of the Powercore Elements bundle, and the more powerful rackmounting Firewire Powercore. Now a third Powercore has been added to the range, and in essence, offers half the power of the Firewire Powercore in a free-standing format, again with Firewire connectivity. Though this only has two DSP chips (the other two models have four), it uses the same faster DSPs as its big Firewire brother and has the same amount of SRAM and DRAM, which is desirable when hosting delay-based effects such as reverb.

Powercore Compact, as it is known, sports a nifty Knight Rider-style 'scanning' blue LED and is powered by a small switched-mode power-supply adaptor that auto-selects to the local mains voltage. It has three Firewire 400 ports on the rear panel to allow the chaining of other peripherals, and it can work alongside the other Powercore products to share the load in larger systems — if a plug-in is authorised for one Powercore, it can be shared between others if they're connected at the same time. The unit, which is surprisingly solid, is very attractively styled and seems to be targeted at laptop users as well as desktop machines. Like its siblings, it works on both Mac and PC platforms and can operate in a VST or AU environment.

Like its big brother, the Powercore Compact acts as a Firewire hub, allowing you to connect further Firewire devices.

All the necessary plug-ins come on the install disc, and any not common to all bundles are authorised via the TC web site. Once authorised, the software may be copied, backed up or even loaded onto other computers and it will work whenever it 'sees' the Powercore hardware for which it was authorised. TC offer regular updates to the plug-ins and operating system, so a broadband Internet connection can be helpful. Once installed, the plug-ins appear within the host software just like any other VST or AU plug-ins, even though they are really running (mainly) on the Powercore hardware. Because of the way computers handle audio, using a DSP processor of this type doubles the system latency, but many of the Powercore plug-ins are of the type that would be used while mixing rather than when tracking, so with these, it's not a problem. Where you do need to use Powercore plug-ins while recording, as you would with the Tubifex amp simulator and Powercore 01 synth, reducing the buffer setting will usually allow you to run one or two plug-ins at acceptable latency. Switching back to a higher setting when mixing will then allow you to run the full complement of plug-ins without suffering any inconvenience. 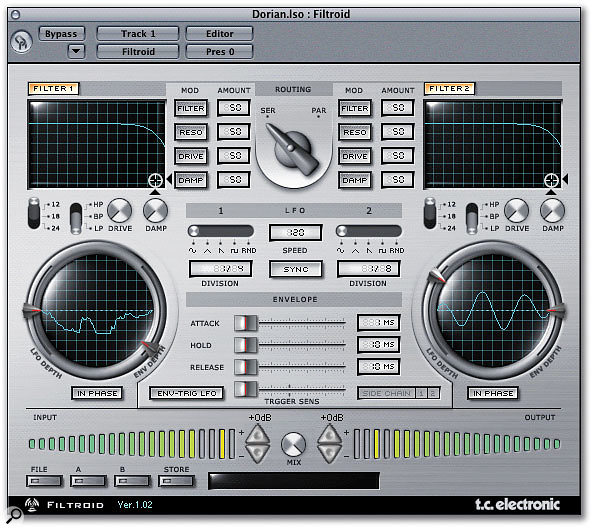 Powercore Element still comes with nine plug-ins, Powercore Compact has 12 plug-ins and Powercore Firewire now includes 14 plug-ins, including some that were previously charged optional extras. Existing Firewire Powercore users can update their plug-in collections free of charge to match the new bundle via the TC Electronic web site. Powercore Element comes with Classicverb, Mega Reverb based on TC's respected reverb algorithms, Chorus Delay, the EQSat Custom parametric EQ, the Vintage CL compressor/limiter and the 24/7C compressor, based on a famous vintage analogue unit. There's also the Voice Strip voice processing channel, the Powercore 01 modelled analogue monosynth and the Tubifex guitar amp simulator. Given that this is the entry-level package, it's worth the price of admission for Classicverb alone, which is still the best-sounding non-convolution reverb plug-in I've used. This offers a nice counterpart to Mega Reverb, which is better at simulating natural acoustics.

Powercore Compact has all these plug-ins too, but also includes Master X3, offering multi-band dynamics and EQ based on the TC Electronic Finalizer algorithms, the Filtroid dual filter bank and Noveltech's recently announced Character, which is said to identify and enhance the sonic characteristics of instruments or vocals.

Being at the top of the range, it comes as no surprise that Powercore Firewire now comes with all of the aforementioned plug-ins plus other goodies. These added-value plug-ins were all formerly paid extras and comprise Dynamic EQ and Denoise (taken from TC's Restoration Suite), which attenuates broadband noise such as hiss, camera noise, air-conditioning noise and other similar contaminants. As Character and Dynamic EQ are very new, I'll cover them in detail in this review. However, one of the strengths of the Powercore platform is that it is supported by plug-ins from a number of prominent third-party companies including Access, Novation, Noveltech, TC-Helicon, Sony, Waldorf and D-Sound. Furthermore, TC have just announced MD3, a new plug-in option of their own based on the dynamics processing of their flagship System 6000 hardware processor (see box above).

TC's latest optional plug-in bundle for the Powercore range, MD3, comprises Multi-band Dynamics and Brick-wall Limiter, and will be available by the time you read this review. At $995 or 995 Euros it might seem like a fairly costly option, but when you consider that it brings the power and the quality of the System 6000 to the computer studio, it's a bargain, especially if you plan to do your own mastering. MD3 is a multi-band processor with 48-bit internal resolution and comprises a three-band compressor, an expander, a four-band parametric EQ and a brick-wall limiter. Stereo material may be processed conventionally or in the M+S domain and MD3 can also convert M+S signals to stereo. The brick-wall limiter is an upsampling design, thus avoiding the clipping that can otherwise still occur when samples either side of a fast peak register less than digital full scale, and also includes a micro delay to make doubly sure that nothing sneaks by. I plan to take a closer look at this in the near future, as it is a seriously heavyweight mastering tool.

Developed by Finnish company Noveltech Solutions, Character has relatively few controls and claims to offer a completely new approach to improving or enhancing the sound of instruments and vocals. It is based on Noveltech's Intelligent Adaptive Filtering (IAF) technology, and manipulates both the frequency response and the dynamic properties of the input source. The process is still secret, but to my ears, Character sounds as though it uses multi-band analysis and filtering to pick out those peaks in the frequency spectrum that give a specific instrument or voice its sonic signature, then emphasises those frequencies using a form of dynamic equalisation.

Simple controls (there are only five knobs in all) are available to select which parts of the audio spectrum are analysed and enhanced. In essence, you choose one of three processing modes (which seem to affect the way the source is analysed), dial in a 'Target' frequency that affects where in the spectrum the enhancement is concentrated, then turn the Character knob until you like what you hear. It works very nicely on bass guitars and acoustic guitars, but could fall down on some sounds if there are strong sonic signatures that you'd rather suppress than enhance. I felt Character was interesting enough when it was a charged extra, but to get it free with the two Firewire units is definitely a bonus. 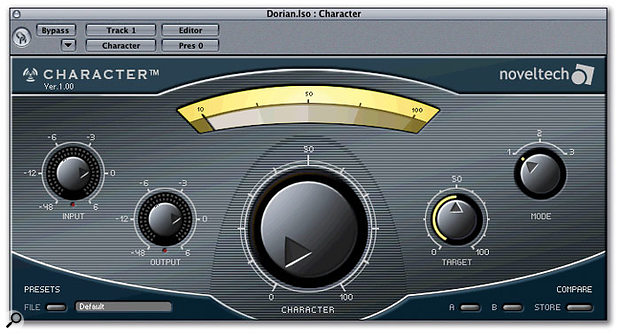 Dynamic EQ is based around a four-band, fully parametric equaliser, but where it differs from a traditional equaliser is that it incorporates dynamic circuitry that can apply cut or boost to each of the EQ bands when the signal in that band exceeds a threshold set by the user. For example, you could have an 80Hz boost set so that it only applies when the kick drum pushes the level in that frequency band above the threshold. Applied over four bands, this type of processing, used with care and finesse of course, can be a powerful tool for polishing tracks or mixes. But there's more — you can unlink the analysis and processing frequency bands so that activity in one part of the spectrum causes cut or boost to be applied at another. For example, you could have the kick drum trigger a high-frequency boost to bring out the hi-hat only during kick-drum hits. Attack and Release are adjustable for each band and there's also independent control over frequency and Q for the analysis and processing filters when these are unlinked. 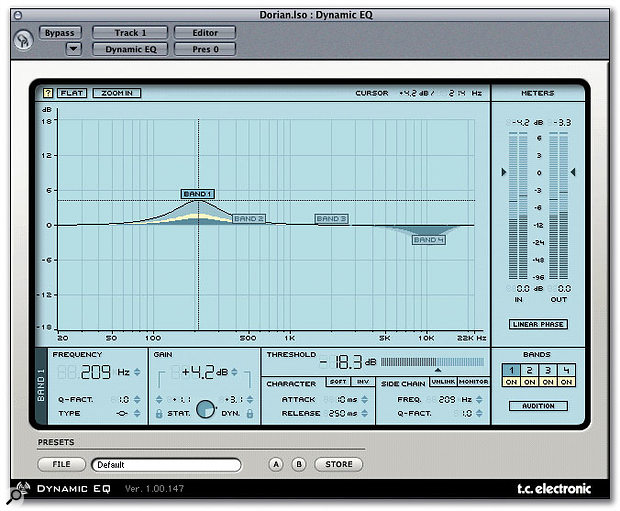 This plug-in has one of the best-thought-out interfaces I've seen, and though Dynamic EQ isn't new, I have never come across a plug-in that is so flexible in this area without becoming unwieldy. What's more, the display is absolutely superb, as in addition to the basic EQ curves shapes, you can see the cut or boost being dynamically applied by means of an animated, shaded portion of the window. A button switches the EQ from conventional to linear phase for more transparent processing, and if you simply want to use a band as conventional EQ, you can disable the dynamic processing. It doesn't take long to get used to the controls, and the power of this plug-in can't be overestimated as a tool for enhancing audio in ways that static EQ can't.

Powercore Compact is a welcome addition to an already well respected range and should be particularly attractive to the laptop fraternity, though unfortunately it can't be powered from the Firewire buss. If the box itself is impressive, the collection of plug-ins that it comes with makes the bundle almost irresistible, especially with its two 'top drawer' reverbs, its vintage compressor emulations and the new Character 'more of everything' enhancer. On top of that, you get the key elements from a TC Finalizer, a very flexible amp simulator, a nifty analogue-sounding dual filter and an authentic-sounding monosynth plus some good 'basics'. How many plug-ins you can run at once depends on which ones you load, but on the whole the capacity of the system is impressive. The full-blown Firewire rack system is still the one to get if you're a power user, but for portable use, or to add extra horsepower to an existing Powercore system, Powercore Compact makes a lot of sense.

Even purchased as a high-end reverb, Powercore Compact is a bargain, but with the included software bundle it's almost too good to be true.