Combining characteristics from various classic equalisers, including the designer’s originals, the Swift isn’t quite like anything else.

When thinking of valve-based pro-audio equipment Thermionic Culture are usually high on the list of specialist manufacturers, and for good reasons. Their products are consistently well designed and deliver exactly what they are supposed to. Certainly that’s the case with the latest addition to their range, the Swift, which is a two-channel, five-band, all-valve programme equaliser with a switchable high-pass filter. It is a great example of its designer, Vic Keary’s ability to take classic elements of vintage valve circuitry and meld them together to make something better than the sum of its parts.

The basis of the Swift’s equalisation facilities is derived from the circuitry employed in EMI’s early REDD series of valve consoles dating from the 1950s, but this has been further complemented with a mid-range section inspired by the classic Pultec EQ, as well as some pure Vic/Thermionic added features. The result is quite a complex and elaborate EQ, but a very versatile and sweet-sounding one.

Housed in a massive 3U rackmounting case with a steel chassis, the Swift features the company’s standard gloss-black front panel, with large control legends picked out in white. It’s a high-quality construction, with all connections at the rear of the enclosed base unit, which contains the mains transformer. XLRs are provided for the audio I/O, and an IEC mains inlet is partnered with a separate voltage selector. The inputs are balanced, while the outputs are unbalanced, as is usually the case with Thermionic equipment, but Sowter output transformers are available as an option if true floating balanced outputs are required. Much of the circuitry and the valves themselves are housed on top of the base unit, protected by a black steel lid containing large ventilation slots.

Moving to the front panel, the layout is very clear, with the main EQ controls arranged in two horizontal rows, one for each channel, with a third bottom row for the channel gain and output level controls. These comprise rotary gain-trim switches for each channel (+3 to -4.5 dB in 11 steps), plus an additional toggle switch for each channel to reduce the output by 6dB. There are also separate flat-bladed toggle switches to activate a full bypass of each channel individually. A chunky power toggle switch with associated green lamp completes this lowest row of controls. 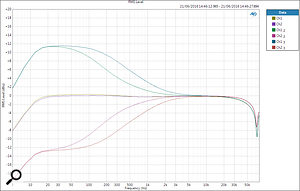 The response of the bass EQ control.The equalisation facilities in the top two rows are, mostly, laid out in a logical sequence from left to right, starting with a standard bass-shelf section, followed by separate mid lift and cut, a presence control, treble shelf, and an ‘air’ section. The final element, a switchable high-pass filter, seems out of place; it would seem more logically located before the bass shelf on the left-hand side. However, the actual HPF circuitry follows the Air filter in the signal path, so to position the filter control on the extreme left would have necessitated running two sets of high-impedance wires right across the front panel, which wouldn't have been a good idea. One advantage of this unusual layout, though, is that you can you can use the left hand to control the bass shelf and the right for the HPF simultaneously! 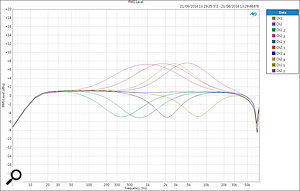 The mid-range boost control with a low boost applied at different frequencies.Derived from EMI’s 1950s consoles, the bass shelf is part of an active Baxandall equaliser design, and a rotary gain control (scaled arbitrarily ±10) offers a maximum boost/cut range of roughly ±12dB. A toggle switch selects between corner frequencies of 50 or 100 Hz. The partnering treble high-shelf section also features a gain control, again marked in a ±10 scale; the actual boost/cut range spans +11 to -14 dB. Again, switchable corner frequencies of 7 or 12 kHz are provided by a toggle switch. An interesting oddity, noticeable on the measurements I took, is a deep notch in the unit’s response at 70kHz. It’s nothing to worry about, sonically, but it is revealed clearly in my Audio Precision plots, which extend to 80kHz. 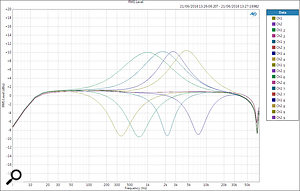 The same, with a larger boost —the bell shape narrows.A third element associated with this active EQ section is a switchable presence boost, which is derived from a design which Vic implemented on desks he built in the early 1960s. This presence boost is controlled by a four-position rotary switch labelled simply 0, 1, 2, 3, providing a broad 4dB lift in the response at progressively higher centre frequencies. The 0 position is a flat response, while positions 1-3 select centre frequencies of roughly 0.9, 1.8, or 4.5 kHz. 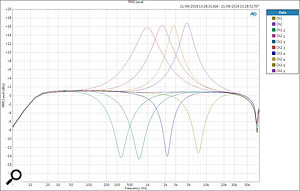 The same at an even greater boost setting, with the Q narrowing yet further.Returning to the two mid-band controls, these follow the Pultec concept of separate passive cut and boost sections, each with selectable centre frequencies and bandwidths. The mid-cut section can be switched between centre frequencies of 350Hz, 700Hz, 2kHz or 7kHz, and the amount of cut is adjusted with a rotary control, again scaled 0-10, although the maximum attenuation level is determined by the bandwidth setting. The maximum cut is around -15dB for the High Q (narrow bandwidth) mode, falling to -10dB and -5dB for the Medium and Low Q positions, respectively. This arrangement works extremely well, providing more attenuation as the selectivity increases.

The mid-lift section works in exactly the same way, with maximum boosts of approximately 15, 9 and 6 dB for the High, Medium and Low Q modes, respectively. The centre frequency mid-lift options are 1, 2, 3 and 4.5 kHz.

As if all that wasn’t flexible enough, Thermionic have thrown in an extra high-frequency band, marked ‘air’. This is another passive EQ section which provides a second fixed-frequency high-shelf lift, with a corner frequency around 8kHz and reaching its plateau around 30kHz. The only control is an amount knob, providing a maximum 6dB boost, almost all of which is available at 20kHz. 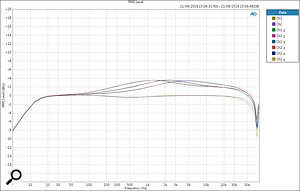 The frequency response of the Presence control.As I remarked above, the final rotary switch adjusts a high-pass filter, and it provides a very useful means of controlling unwanted low-end energy. The chicken-head control is marked with turnover frequencies of 0, 12, 24, 48, and 68 Hz, plus a low-shelf-step option. In practice, the measured -3dB points occur at 9, 20, 40, 80, and 150Hz. The low shelf-step mode does exactly what it says, gently reducing the level below 2kHz, reaching -3dB at 500Hz, and -6dB at 50Hz, with a steeper roll-off below that. 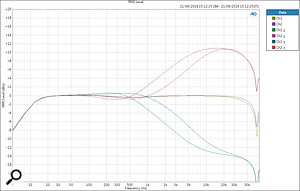 High shelf boost and cut responses.My Audio Precision bench-tests gave slightly different signal-to-noise ratios for the two channels, but both are impressive for a valve unit, measuring 93.0 and 95.8 dB (20Hz-20kHz measurement bandwidth, ref +4dBu). An FFT plot revealed the mains-related harmonics well below -105dBu on one channel, and below -98dBu on the other. I also noticed some slightly lop-sided crosstalk figures, with the 10kHz channel-to-channel readings giving results of -60.5dB in one direction and -53.8dB in the other. Crosstalk at 1kHz measured -78.4 and -72.4 dB.

The THD measurements were much more on-target, achieving 0.02 and 0.03 percent on the two channels with a +4dBu input, rising to 0.25/0.14 percent at +18dBu — the channel differences probably being due to the performance of the individual valves. Nevertheless, these are all very respectable specifications and give the lie to the unending popular myth that valve equipment is always heavily coloured! 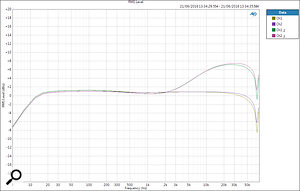 The Air band response. Talking of valves, the signal path is based around just a pair of double triodes per channel, specifically ‘new old-stock’ (NOS) HE 5965 valves together with current-production JJ ECC802S valves. The latter is similar to the more familiar ECC82/12AU7, but with beefier anodes capable of handling higher output levels with lower distortion, while the former was originally designed for use in high-speed computer bi-stable circuits.

The Swift is a truly great-sounding two-channel equaliser with a very comprehensive set of controls and facilities. The bands overlap nicely, and the individual corner and centre frequencies of the various bands seem to be ideally chosen either to enhance or tidy up the most common problem areas in guitars, vocals, drums and so on. I never found myself wanting different settings — the existing provisions were more than sufficient for everything I needed. 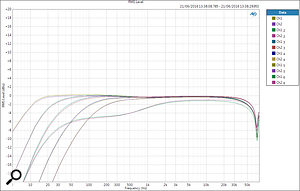 The different low-pass filter responses.Of course, this is primarily a musical shaping type of equaliser, rather than a forensic fixing type, but if that’s what you need then the exhaustive selection of bands and the way in which they interact enable some very powerful, yet at the same time subtle, tonal moulding. And although I mostly used the Swift across a stereo mix bus I found it equally well suited both to polishing a complete mix and for contouring individual sources. 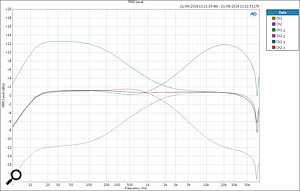 The response of all shelves shown on the same plot.I had wondered if the three different HF bands (presence, treble and air) would effectively trip over each other, rendering one or more redundant. They don’t: in fact they operate in different parts of the HF spectrum and complement each other rather well, allowing subtle shaping and control of different aspects of the HF content. In particular, the ability to use the treble control to attenuate while the presence and air controls apply lift to either side is very useful: a little of each goes a long way, but the trio are very effective when used together. In a similar way, the high-pass filter used in conjunction with the bass-shelf boost leads to some nice Pultec-style dip-before-lift emphasis, which adds weight without muddiness. 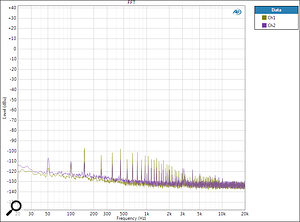 An FFT plot of the noise floor.Overall, I’d say the Swift sounds generally pretty neutral, and from a technical measurements viewpoint I think you could be forgiven for mistaking it for a solid-state equaliser — it really is that quiet and clean. It certainly doesn’t shout about its valve topology through the stereotypically overdone saturation and distortion that so many valve processors employ. Having said that, though, it does exude a kind of ‘analogue confidence’ and sure-footedness, in the form of a slightly larger-than-life character with a subtle richness and weight at the low end and through the lower mids, combined with a silky smooth top end. It sounds ‘big’ without being slow or stodgy, and even with all the controls set flat I found it still added a sense of solidity and integration to a stereo mix. The Swift is a class act and easily justifies the large chunk of racking real-estate that it requires.

Hugh generated a number of test plots, using an Audio Precision Analyser, which document the frequency response of the Swift’s different EQ bands, and other aspects of the technical performance. You can find them in this downloadable ZIP file.

A very natural and musical valve equaliser with comprehensive facilities and an impressive technical performance.