In the field of alternative rock, the name Steve Albini is legend, not only for his working methods, but also for the distinctive sound he brings to each of his works. This latest Expansion for Toontrack’s EZdrummer was recorded by Albini in his Electrical Audio studio in Chicago and, through the kit pieces and the tunings used, offers something of his signature sound in bottled form. 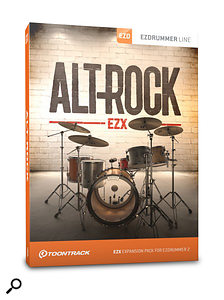 Alt-Rock EZX is based around two full kits with cymbals plus a selection of additional kit parts and percussion that includes five snare drums and even timpani. The first kit is a Ludwig Club Date with a 20-inch kick plus 12- and 14-inch toms and a 13-inch snare with a calf-skin batter head. Apparently this was one of Ludwig’s cheaper kits and had thinner than usual shells, which gives it a uniquely resonant character. Remo Renaissance heads are fitted to the toms producing a strong attack with reduced overtones. The toms are also tuned with the lower head slightly higher in pitch than the batter head, which causes the pitch of the drum to rise slightly after the stick impact.

Kit number two is a DW Collectors’ Series with a 24-inch kick plus 15-, 16- and 18-inch toms. The kick is fitted with a Superkick II head, while the toms are kitted out with Remo Emperor batter heads and Remo Ambassador bottom heads. Again, Albini’s choice of heads and tuning produces a well-defined attack, a solid sense of pitch and controlled overtones. The drums have a fairly fast decay, but in this case the toms are tuned to produce a slight pitch drop as the tom sound decays, achieved by tuning the lower head slightly below the batter head. The snare for this kit is a DW 5×14 model using a Remo CS batter head and a Diplomat-weight snare head with a two-inch snare band.

The preset kits demonstrate the tonal range that can be coaxed from these drums, which covers everything from brash to warm and mellow. What they all have in common is that they sound like real kits in real rooms. Soloing mixer channels offers an interesting insight into the way the kits are treated. For example, the overheads appear to have had quite a lot of low end rolled out, while the reverb fader brings in what sounds like an algorithmic reverb rather than a plate. By rebalancing the close mics, overheads and ambience channels you can coax a lot of variation out of these kits, and of course you can swap kit parts to make up your own. As always, a selection of suitable MIDI grooves and fills is provided.

Another very worthy addition to the EZdrummer range, offering something a little different, but at the same time very usable and surprisingly adaptable.