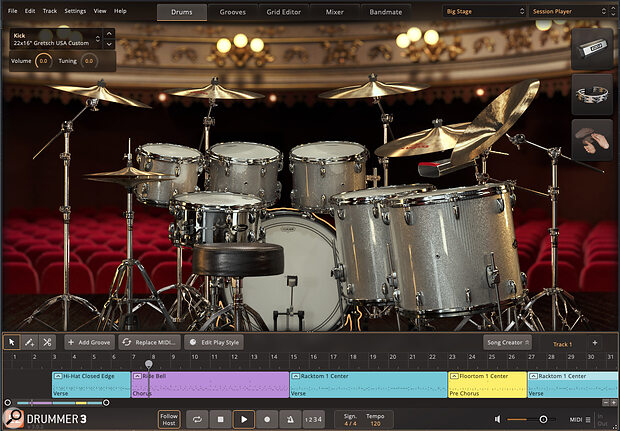 EZdrummer 3 may come with an impressive and versatile new core library, but don’t expect that to stop Toontrack trying to tempt you with additional options. And, given the unique recording location of the first EZX designed for EZD3 — Big Stage — there’s certainly a case to be made that it brings something different. The expansion provides four complete kits, plus some additional kicks and snares (oh, and cowbells!) recorded on the stage of the impressively large mid‑1800s auditorium within Gothenburg’s Stora Teatern. The building also houses Top Floor Studios, home to engineer/producer (and drummer) Jakob Herrmann, who previously produced Toontrack’s Duality EZXs at Top Floor. For Big Stage, Jakob both picked the kits used and managed the recording process. Drumming duties fell to Darby Todd, also a Toontrack veteran. The library runs to nearly 7GB on your hard drive and requires EZD 3.0.1 or later. Superior Drummer 3.3.0 is also supported.

The kit choices include some top‑notch Gretsch, Zildjian, Ludwig, Paiste, Yamaha and Tama instruments, providing plenty of sonic variety in kick and snare sounds/styles to easily span any number of musical genres. However, the undeniable USP of this EZX is the recording space. Alongside the usual close‑miking of the kit elements (the kits also sound great dry), Jakob therefore also exploited a combination of microphones placed around the auditorium to provide a whole range of ambience flavours. These included mics on the stage itself, positioned at the (very high!) ceiling, within the balcony, in one of the private boxes, and in the main audience area.

Dipping into EZ3’s Mixer page for each of the presets offers you various combinations of these, each with different macro‑based processing possibilities available. So, for example, the Hawk preset, as well as the usual kick, snare, hihat, tom and overhead channels, also offers Stage, Audience, Balcony, Ceiling, Royal Box and Reverb channels.

The sound of an impressively large room might not be something every project needs, but Big Stage has bags of character and will undoubtedly appeal to those about to rock.

Whichever preset you try, the degree of ambience control provided within the Mixer, and the range of different ambience characters available, is hugely impressive. The Stage and Audience mic options sound fabulous when combined with the close mics and would suit all sorts of rock styles, while the Ceiling and Royal Box mics let you blend in something a bit more aggressive. And, while you can go super‑huge, if you just want big, lively, powerful drums, you can finesse that exactly to taste. It’s powerful stuff.

There are undoubtedly few folks lucky enough to have a large theatre space and stellar microphone collection available to record their drum tracks in. For the rest of us recording mortals, there is now Toontrack’s Big Stage. Yes, you could use these sounds in almost any musical genre, but its title accurately reflects what it excels at: big, bold, drums that you can place in an almost infinitely variable acoustic space. The sound of an impressively large room might not be something every project needs, but Big Stage has bags of character and will undoubtedly appeal to those about to rock.