Toontrack’s Dream Pop EZX expansion pack for EZdrummer is most definitely not just another acoustic drum kit. In fact Toontrack themselves describe it as “nature meets technology”, blending as it does samples of organic sounds, conventional drum kit pieces and electronic percussion — and many of the sounds are processed in some way. Nor are all the sounds percussive: you can call up slow-attack textural whooshes, synth tones and processed natural sounds as well as electronic and acoustic drum voices. 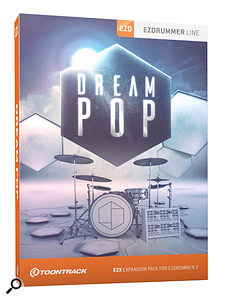 Dream Pop EZX comes with 29 preset kits and almost 250 individual sounds spanning percussive stomps, claps, snares and kicks to chromatic pads, whooshes and filter loops, some of which were created using various modular synth systems. In fact there are so many sounds that every semitone on a MIDI keyboard triggers something. And of course you get a library of MIDI grooves to show them off. With over 30 snare sounds, even more kicks, multiple toms, hats and crashes, claps, snaps and shakers, the percussive side of Dream Pop is well catered for, but then there’s a whole list of electronic/processed percussion and effects as well.

A glance at the user interface will show you that there are some oddball kit pieces present, behind which is a wall sporting an array of pads, each of which can be assigned a different sound. There are bass pedals on the floor, a synth on the side, a stool and even a plant pot that can be assigned to trigger your choice of effect sounds, which begs the question, who is this expansion pack aimed at? Well, experimental and ambient music is a safe bet, but many of these sounds — and not just the electronic drum sounds — would also work nicely in an EDM context alongside some more familiar sounding grooves. Then there’s film and TV scoring.

Whatever your musical leanings, Dream Pop has something to offer, even if only to be used as a garnish to your existing sounds. To get a real feel for this pack, you only need to pull up some of the included MIDI grooves. For my money, sounds such as the muted booms and Dragon Breath make excellent punctuation tools for ambient music. If you need ear candy as well as percussion, look no further.