Toontrack seem to be going through a bit of a metal phase at the moment with their latest EZ Drummer expansion kit being called, predictably enough, Metal! — complete with exclamation mark. Creation of the all-new kit sounds making up this expander pack was supervised by three leading modern metal producers, and we're told that nine custom drum kits were recorded by Daniel Bergstrand in Norway's Tanken Studio. Additional samples were also contributed by Mark Lewis and Jason Suecof. No wonder then that there's a larger than usual choice of kit pieces, with 12 different snare drums, 12 kick drums and up to eight tom types.

The EZX format remains comfortably familiar, with pull-down menus for all the alternative sounds accessed via tabs on the drum graphics. The kit is also extremely generously appointed when it comes to cymbals; there are 11 available at any one time in addition to the hi-hats. Most are fixed to one cymbal model though some offer a choice of a couple of alternative sounds where the range includes tiny splash cymbals, the usual 'big guns' crashes and rides plus both Chinese and trashy models.

Metal kits tend to be large and impressive, this being no exception with double kick drums, three toms up top and two floor toms, all surrounded by a sea of cymbals. Its mixer includes the usual individual kit section and overhead faders, augmented by separate controls for room ambience and a parallel 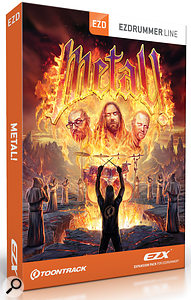 As we've come to expect with Toontrack instruments, the standard of recording is impeccable and the range of drum types surprisingly wide with DW Collector X-shell and Ludwig Quadra Plus drums forming the backbone of the collection. Though labelled a metal kit, this versatile pack could comfortably sit across a range of rock and even indie pop genres. The snares in particular cover just about every style from brash to vintage, from deep and woody to bright and metallic. Where you do want out-and-out metal though, there are some great hard-hitting sounds with bags of depth combined with a nicely assertive attack. The default kicks and floor toms, in particular, have an almost subsonic dimension to them.

Bringing in the room ambience fader adds a useful brashness, while the compression fader makes everything sound bigger and fatter, saving you the bother of setting up parallel compression. This expansion pack is hard to beat for instant gratification, especially if hard rock and metal is your thing, but don't dismiss it out of hand if you're not interested in metal, as Metal! is quite flexible and lends itself to any style where you need a solid, driving beat. Paul White