First the Rock, then the Boulder, now the Avalanche: Unity's monitor range expands, with the launch of this powerful new sub.

Sealed-cabinet monitor loudspeakers are relatively rare, but offer some useful advantages. Accurate time-domain performance at the low end is the best-known benefit, but they also have a relatively gentle bass roll-off characteristic. While sealed cabinets appear to produce a weaker bass output than ported cabinets of the same size, their gentler roll-off slope means that, in fact, they actually produce audible bass to a far lower frequency.

The obvious way to improve the bass performance of a sealed cabinet is to make the cabinet bigger, and that's what Unity Audio did when they introduced the Rock's larger three-way sibling, the Boulder, in 2012. Both models have been reviewed in the pages of Sound On Sound (April 2010 and August 2012, respectively). However, in some situations a larger loudspeaker is just not a practical option, so the alternative approach is to employ a separate subwoofer in a 2.1 configuration to take care of the bottom couple of octaves. Unity have addressed this option by introducing a substantial beast of a 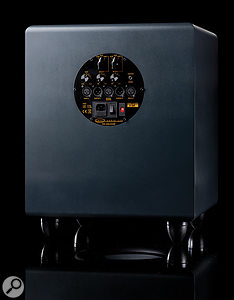 subwoofer called (in keeping with the geological theme) the Avalanche.

Designing and building a high-quality subwoofer is not as simple as many believe. It's easy to make a box that produces loud 'booms' for movie soundtrack explosions, but extremely difficult to make one that plays the full scale of bass notes, and which does so with minimal harmonic distortion. The latter is a critical issue, of course, because the last thing anyone needs when reproducing low frequencies is a horde of unwanted harmonics masking the mid-range from the satellite speakers!

Like the Rock and Boulder, but unlike the vast majority of subwoofers, the Avalanche has a sealed cabinet. It is large, but not as big as many similarly powerful subs, with the square-ish grey box being taller than it is wide (thanks in part to its heavy-duty, conical rubber isolation feet). It measured 430 x 430 x 540 mm (whd) overall and weighs a considerable 37.5kg, but most of the weight is towards the bottom of the cabinet, because the substantial 12-inch driver is mounted on a laminated baffle some 42mm thick, and vents directly downwards onto the floor. The majority of the cabinet is constructed from 24mm ply, damped internally with a dense rubber "lead substitute” material to control panel resonances. A panel on the top surface gains access to the electronics chassis for servicing, and all the operational controls and connections are located on a circular metal panel on the side of the cabinet.

Interestingly, the acoustic design isn't actually that of a simple sealed box, despite appearances. Technically, it's an 'aperiodic enclosure', which means two sealed boxes coupled together via a heavily damped vent or 'restrictive membrane'. The bass driver is fitted at the bottom of the box, and sends its sound downwards towards the floor and out into the world in the usual way, while the energy from the back of the driver cone disappears initially into the lower enclosure — just like a normal, sealed-cabinet design. However, the volume of this enclosure is roughly half the total volume of the whole cabinet because of a horizontal partition. A very heavily damped port within this partition allows some of the internal acoustic energy to pass into the upper sealed chamber, absorbing the unwanted energy and controlling the complete system's acoustic tuning.

As far as the driver is concerned, it is working into a 'leaky' sealed box, but none of its rear energy actually makes it to the outside world, as it would in a ported cabinet. The benefit of this more complicated approach is that the driver 'thinks' it's working into a much larger cabinet than it really is, and that allows much greater LF extension than would be normal for a simple sealed cabinet of the same total size. In the case of the Avalanche, the published specifications claim an impressive bandwidth of 22 to 120 Hz, presumably at the -3dB points.

The internal amplification is provided by a two EAR bass-amplifier modules (the same as are used in the Rocks and Boulders) running in parallel, complete with their highly unusual output-transformer topology. In this application the amp pack provides a conservatively specified 150W to the single 12-inch driver. The active crossover circuitry employs high-speed, ultra-low-noise Burr Brown 'DiFET' OPA627 op-amps to sum the left and right inputs and apply a fourth-order, low-pass filter for the amp module to control the subwoofer's upper frequency extension. The crossover circuitry also applies second-order high-pass filters to the individual left and right outputs, which are passed on to the satellite speakers.

Although the slopes of both sets of filters are fixed, their turnovers are independently adjustable to allow flexible integration between the satellites and subwoofer. Very sensibly, two preset modes are provided to configure the Avalanche optimally with Unity's Rock or Boulder monitors, setting the crossovers nominally around 60 or 50 Hz for the Rocks or Boulders, respectively.

However, where room acoustics or personal preferences make different settings desirable, or if the Avalanche is to be used with satellite monitors from other manufacturers, a fully adjustable manual mode is also available, allowing both the sub's low-pass and the satellites' high-pass filters to be adjusted anywhere between 40 and 120 Hz. The turnover frequencies are adjusted with ordinary round rotary controls, while the preset/variable mode switches feature old-school 'chicken head' knobs.

A small toggle switch provides polarity inversion to help align the phase of the sub's wavefront with that of the satellite speakers, and a third rotary control adjusts the subwoofer gain. The Avalanche includes a remote bypass facility which hardwire-bypasses the satellites' high-pass filters and simultaneously mutes the subwoofer output. This allows the satellite speakers to be auditioned in their original glory, making it easy to assess the contribution of the sub. Not only is this very useful when assessing how the low-end balance of a mix will translate to smaller, limited-bandwidth speaker systems, it also comes in very handy when performing the system's installation alignment.

Audio connectivity is taken care of by two pairs of male/female XLR sockets, which accept the balanced stereo line-level analogue inputs and provide the corresponding high-pass-filtered satellite speaker outputs. A fifth XLR, mounted in the middle of the array of socketry, caters for the remote bypass connection, and a suitable foot-pedal switch is supplied. Mains power is connected via the usual IEC inlet with an adjacent on/off rocker switch and 115V/230V AC voltage selector.

I was supplied with a pair of Rock monitors in addition to the Avalanche, so I set the system up as a conventional 2.1 stereo monitor, alongside my usual PMC IB1 three-way reference system. The Rocks I used were the current MkII versions (£2199$2498 per pair), which differ slightly from the originals I reviewed in 2010, the main improvement being a minor circuit modification that relaxes the bass amplifier's feedback loop slightly. This tweak, which can be retrofitted to MkI models, improves the bass extension slightly and gives the Rock a more dynamic character.

Hooking the Rock/Avalanche system together is trivially simple, requiring only a few XLR cables and a mains supply, while the preset crossover options take all the guess work and most of the fine alignment tweaking out of the installation process. All I really had to do was check the polarity and then fine tune the level setting to optimise the integration between satellites and sub — something that was made very straightforward thanks to the included footswitch bypass. With a correctly set-up subwoofer, you only really notice it's doing the right thing when it is bypassed and you hear the absence of low-end support!

The only small negative point I should mention is that the Avalanche (which was an early production unit for this review) doesn't currently have any visual indication of when the bypass mode is activated, which could potentially lead to some confusion. Occasionally when I lost track of which mode it was in 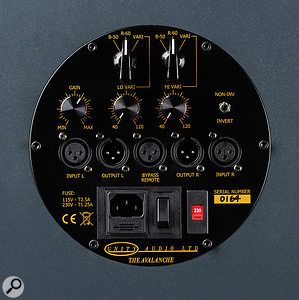 The control panel allows for variable or preset selection of the low- and high-pass filters, as well as polarity inversion and output level. I had to reach under the sub and feel for the driver vibrations! I raised this practical omission with Unity's MD, Kevin Walker, and I gather adding an LED to indicate bypass-mode is under consideration for a future update.

Sonically, the Avalanche is very clean and quiet, with very low harmonic distortion and no audible noise. The chunky, conical rubber feet provide good vibration isolation to the floor, and the cabinet panels are all well-damped and resonance-free. Constructional elements of my listening room often entered sympathetic vibration when I was running the sub quite loudly, but the Avalanche itself was completely rattle-free! Bypassing the subwoofer confirmed that the Rock's superbly transparent mid-range wasn't degraded at all by any masking subwoofer distortions, and overall the 2.1-speaker Rock/Avalanche combination forms an impressively well-integrated and coherent full-range system. I couldn't improve on the preset crossover settings using the manual adjustment mode (not that I expected to), and the subwoofer positioning was entirely transparent, with its position not being identifiable by sound alone (which, again, suggests very low production of audible upper harmonics).

I also hefted the Avalanche/Rock system to a friend's studio, which normally employs a PMC 2.1 system based around TB2s and a TLE1 subwoofer. Again, setup was very quick and easy, and the performance very impressive — to the extent that I struggled to relieve him of the review system after a couple of days' use!

Really good subwoofers suited to high-end professional music production are inevitably expensive, and the Avalanche doesn't upset that generality, but it does deliver a performance to justify its high cost, and it does upgrade the Rock and Boulder monitors into true, full-range monitor systems without compromise.

The Avalanche's pricing puts it in the same area as Genelec's 7070A and Dynaudio's Air Base 2, although the former includes bass-management facilities for a 6.1 setup (instead of 2.1 in the Avalanche), and the latter can only be used with Dynaudio Air satellites. PMC's TLE1 active subwoofer costs a little more than the Avalanche, combining Bryston-derived amplification with two 6.5-inch drivers to allow a very practical form factor, but minimal bass-management facilities. At slightly lower cost, Dynaudio's BM14S includes 2.1 bass management features, while Genelec's 7060B has facilities for 6.1.

Designed to complement the exemplary performance of the Rock and Boulder speakers, the Avalanche fills in the lowest octaves without compromising midrange clarity. It is immensely powerful and clean-sounding, and includes configurable two-channel bass-management facilities.